Don King to GGG: No Disgrace In Losing; We'll Give You a Rematch

Even as Don King encouraged Golovkin to learn from his first defeat Saturday night by becoming “a champion of the losers,” Golovkin seemed entertained by the bombastic promoter toward the end of a nearly 20-minute diatribe Wednesday. King mentioned everyone from host hotel employees by name to Kim Jong Un when it was his turn to speak during their press conference, before meandering his way toward a message for Golovkin, who’s heavily favored to defeat King’s fighter, Vanes Martirosyan.

“The inimitable words of Muhammad Ali says, ‘You have to lose to be a whole champion,’ ” King told Golovkin. “So there’s no disgrace in losing if you come back. You get knocked down, you get back up, you dust yourself off and get back into the game. That’s what counts.” 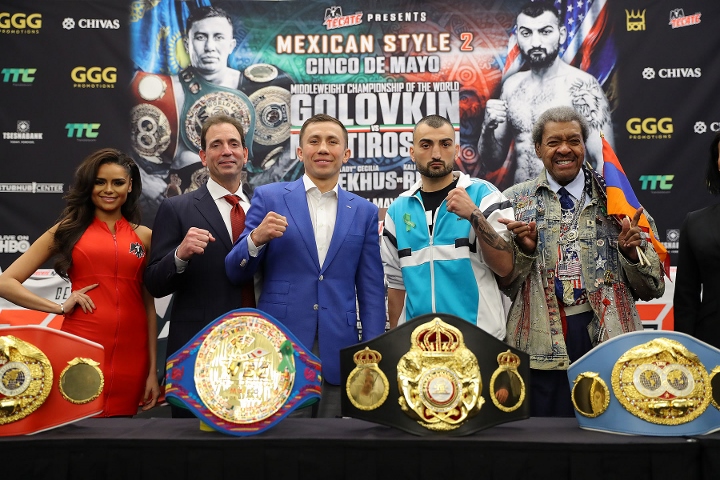 Naturally, King considers Martirosyan more than a live underdog entering their 12-round fight for Golovkin’s WBA, WBC and IBO middleweight titles at StubHub Center in Carson, California (HBO; 11 a.m. ET). Handicappers have installed Golovkin (37-0-1, 33 KOs) as a 30-1 favorite over Martirosyan (36-3-1, 21 KOs), who’ll move up one weight class for his first fight in nearly two years when he challenges Golovkin.

The 32-year-old Martirosyan, of nearby Glendale, California, is 0-2 in world championship matches and agreed to replace the suspended Canelo Alvarez on just 2½ weeks’ notice. King still insists his fighter is ready to halt the unbeaten Golovkin’s streak of WBA middleweight title defenses at 19.

“When you see the championship transfer, it ain’t gonna be because it’s bad,” King said. “It’s gonna be because it’s good for Golovkin. It gives him an opportunity to understand what it is to lose. That makes him bigger. That makes him better. That gives him that type of intestinal fortitude that no one can deny. And I promise you, Golovkin, we will give you a return match. It’s not gonna be where you’re gonna have an opportunity where you’re gonna be knocked down and discarded – no, no ,no, no. Fair play for the boxer. Safety for the boxer.

“You have an opportunity to become bigger than ever. Show them what you can do in losing. We know what you can do in winning. We know what you can do in winning. Ain’t no question about that. You’re Triple-G, got more belts than anybody. You know what I mean? You’re Triple-G. So now let us see how you can win when somebody gets knocked down, for the guy that’s on the corner, that just lost his job, feeling sorry for himself, the man who had a virus, a cold, who can’t seem to get up and go get it. You know, however it’ll be. Show us to be a champion of the losers. Then you’ll become a whole god-damn fighter. You know what I mean? A whole fighter!”

[QUOTE=SteveM;18734137]go down south of the border if you have some savings - the life is slower and more relaxed and the women are sweeter[/QUOTE] thanks for the advice im planning a trip in the future

[QUOTE=uppercut510;18733891]This dude can sell water to an ocean, when i was listening to him i started off like wtf is he saying but by the end of it i was beleiving him[/QUOTE] That brother is a smooth crook.

[QUOTE=TOBYLEE1;18733743]They are trying really hard to sell this fight like a competitive one.[/QUOTE] That's boxing 101

Am I the only one that actually does believe that martyroachyan has a solid chance.....just bet 20 to get 380$....

How the hell does King still steal oxygen? Damn. He should have been put down a long time ago.