Paul Dogboe, the father and trainer of WBO interim-super bantamweight champion Isaac 'Royal Storm' Dogboe of Ghana, has promised to honor the United States President, Donald Trump, in the aftermath of their scheduled title fight.

Not only does the confident trainer predict that his son will defeat WBO full champion Jessie Magdaleno - Dogboe Sr. has promised to remove him from the United States by 'tossing him over the Mexican wall' - and then they they are planning to present the world title to Trump.

"We are focused and our only mission is to devour him, eat the crazy chicken, throw him over the wall of Mexico and present the title to Donald Trump. Magdaleno will run when he sees Isaac," Dogboe Sr. told The Pulse of Ghana. 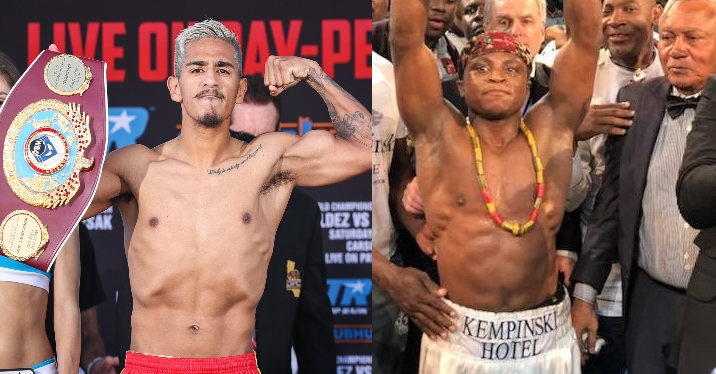 The fight is scheduled to take place on April 14th, as part of the undercard to Terence Crawford vs. Jeff Horn at Mandalay Bay in Las Vegas.

While Magdaleno (25-0, 18 KOs) comes from a Mexican background, he was born and bred in Las Vegas, Nevada.

Dogboe (18-0, 12 KOs), who represented Ghana in the 2012 Olympic games in London, secured the title shot with his unexpected knockout of dangerous Cesar Juarez in their final eliminator.

The outspoken trainer expects Magdaleno to use his footwork in the bout by sticking and moving. He would rather see the current champion stand and trade.

Magdaleno was last seen in the ring back in April, when he made the first defense of his title with a stoppage of Adeilson Dos Santos. He captured the WBO belt with a twelve round decision win over Nonito Donaire back in the fall of 2016.

Look out! The Ghana cannibals are coming to America hide the women and children!!

I knew it was only a matter of time before someone brought up Donald Trump in Boxing as a way to trash talk. I expected it to be Angel Garcia, though.

piece of ****, who says that about another fighter, talk about classless. hope his son gets his ass beat, racist pos