Dmitry Bivol made an expected transition from one of the sport's greatest prodigies to a full-fledged contender and positioned himself for a major title fight in the nearest future with a one-sided decision over very awkward WBA #1 and interim light heavyweight champion Felix Valera (13-1, 12 KOs). 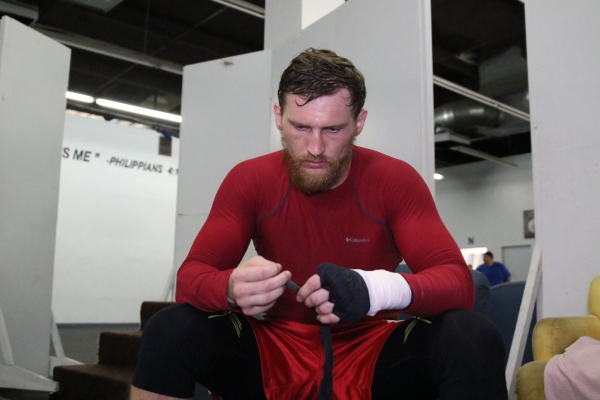 Fighting in his seventh fight, WBA #7 Bivol (7-0, 6 KOs) showed extreme poise and very swift hands in the first half of the fight, calculating and measuring slick but heavy-handed Valera. The Domincan clowned his way into the fight, staying competitive under fire but missing much.

In a huge sixth round, Bivol worsened Valera's already complexed face condition and also dropped him with a left hook to the whiskers. He repeated his trick in the eighth but punched himself out for two and a half rounds. Valera was allowed to come back and he did just that with some nice body shots.

Bivol, 25, found his second breath in the eleventh and finished the bout solidly but failed to get the job done. Final scores were: 119-107 x2 and 116-111. WBA regular champion is Juergen Braehmer. WBA super champion is Sergey Kovalev.

Passing the toughest test of his young career the Chechen gun Umar Salamov (16-0, 12 KOs) has captured his biggest prize - a vacant IBO light heavyweight crown. On the losing side of a close unanimous decision was rugged British challenger Bob Ajisafe (16-3, 7 KOs).

WBO #7 Salamov was better in the opening rounds but Ajisafe was always game. The Brit enjoyed a major sixth round when he almost stopped the local hero with a terrific uppercut. Salamov survived a major scare but managed to survive. Still the midst of the fight was clearly Ajisafe's.

WBA #2 super middleweight Stas Kashtanov (35-2, 18 KOs) made a short work of 41-year old Pole Tomasz Gargula (18-2-1, 10 KOs) to acquire a vacant IBF International 168lb title. Kashtanov dropped Gargula with a left hook to the liver in round two, and the Pole failed to beat the count. The officil time was 1:32 of round two.

Light-hitting Satybaldiev dropped Abalos twice - once in the tenth, and then again with a major left hand to the head in round twelve. Final scores were: 120-106 x2, and 118-108.

Heavyweight Rashid Kodzoev (1-0) debuted with a hard-fought unanimous decision win over previously undefeated Ukrainian Konstantin Dovbyshenko (3-1, 1 KO). The fight was even over the first two rounds but the Russian thrusted to get an upper hand in the final six minutes to secure the victory.

2012 London Olympics silver medalist and multi-time champion Sofya Ochigava (1-0) enjoyed her first fight as a pro with a unanimous decision over tough Kazakh import and fellow debutante Firouza Sharipova (0-1). Ochigava was slicker and showed more finesse than her opponent in a four-rounder.

Lebedev vs. Dorticos needs to happen.

ramirez is done imo. I hope he invested his money wisely if his promoter didn't screw him over

ramirez is done imo. I hope he invested his money wisely if his promoter didn't screw him over