12,000 tickets have been sold today for the crunch Heavyweight clash between Dillian Whyte and Joseph Parker at The O2 in London on July 28, live on Sky Sports Box Office.

Tickets flew out on general sale today after venue and Matchroom Fight Pass pre-sales sold-out with fans flocking to witness the Heavyweight tussle supported by a bumper bill.

Whyte is on the cusp of World title action destroyed Lucas Browne with a devastating sixth round KO of the Australian in London in March to defend the WBC Silver title and number one ranking he’d landed by beating Robert Helenius in Cardiff in October. 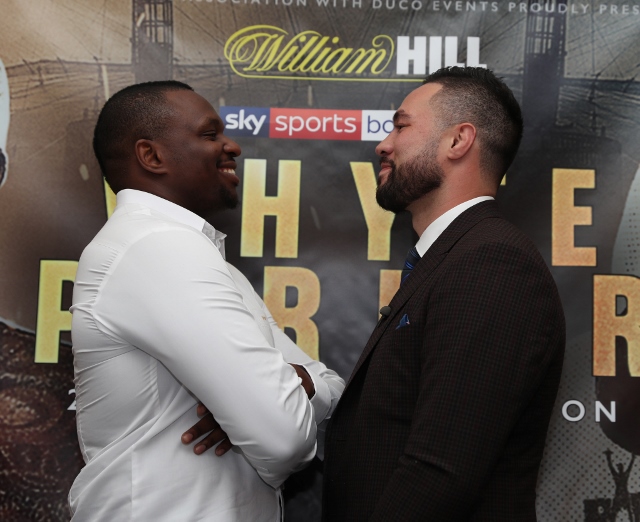 Parker is back in the UK after fighting in the Welsh capital in an historic unification battle with Anthony Joshua in March, with Whyte’s old foe handing a first career defeat for the New Zealand star on points. Parker is in Britain for the third fight in a row having made his second defence of his WBO crown against Hughie Fury in Manchester in September 2017.

Another 50-50 Heavyweight battle was added to the card today as former World title challengers Dereck Chisora and Carlos Takam meet in a must-win match up that will keep the World title hopes stay alive for the winner, but the loser’s career at the highest level all but over.

Kell Brook clashes with Brandon Cook in a World Super-Lightweight title eliminator, Katie Taylor defends her WBA and IBF World Lightweight titles against Kimberly Connor, Conor Benn and Cedric Peynaud rematch after their fight of the year brawl in 2017 with a title on the line this time and Joshua Buatsi steps up in his first ten rounder against former British Light-Heavyweight title challenger Ricky Summers.

[QUOTE=Straightener;18864067]We watch fights for entertainment Chisora takem will be a slug fest surely you got time for that ?[/QUOTE] yeah it's fair enough. and they'll be exciting fights i do admit. i'm just more towards the pure boxing stuff as…

[QUOTE=Hmabshir;18864157]nothing more embarrassing than your avatar pictures. talk about awful boxers and add cowardice to it as well and you get rigo[/QUOTE] i don't even know what an avatar picture is. i guess that's because i'm a grown up. i…

[QUOTE=Shontae De'marc;18867309]UK fanboys are the worst, I blame it on their weak mentality and the fact that they are used to bending over to a monarchy for a thousand years and thanking them while they push their face in the…

[QUOTE=Jkp;18867080]Don't try to use facts to reason with UK fanboys. They are irrational. Looking forward to hype job whyte getting dropped again.[/QUOTE] UK fanboys are the worst, I blame it on their weak mentality and the fact that they are…