According to heavyweight contender Dillian Whyte, there was never a serious attempt by promoter Eddie Hearn to make a rematch with IBF, WBO, IBO, WBA heavyweight champion Anthony Joshua.

The two fighters collided in December of 2015, with Joshua winning by way of a seventh round stoppage.

Hearn was trying to make a rematch for April 13th, at Wembley Stadium in London. 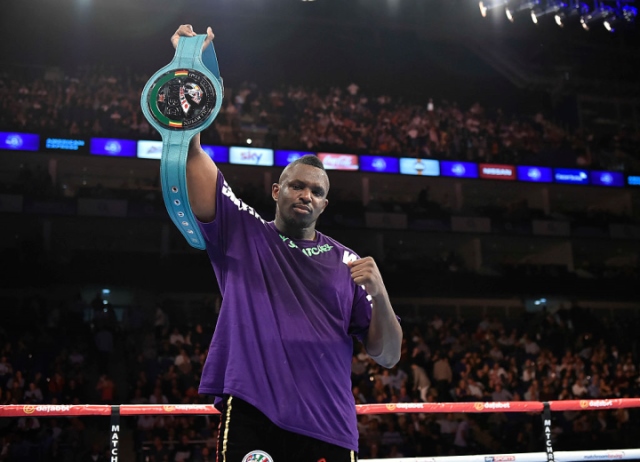 In a recent interview, Hearn claimed the rematch with Whyte was "close" to being a deal.

Whyte has disputed that claim and says the deal is nowhere near being done, called the rematch approaches of Joshua and Hearn as "half-hearted."

He believes Joshua and Hearn are really focused on facing Jarrell Miller at Madison Square Garden in New York City.

"It's clear to me that they have never been serious about making a fight with me for April 13," Whyte told Gareth Davies of Telegraph Sport. "If they were serious, they should have started negotiating sooner and with more realistic terms. The way he is going about business, Joshua won't be fighting me, Wilder, or Fury any time soon."

"They’ve had the (Wembley Stadium) date booked for ages, and have known AJ was available since he beat Alexander Povetkin on 22 September, yet didn't even make an initial offer until 10 January. We could have made this fight if Joshua really wanted it but it has been clear to me all along that they've been focused on making the Jarrell Miller fight in New York city on [streaming service] DAZN.

"Eddie has been trying to make him and Joshua look like they've made a serious attempt to make a fight with me for April 13, but I know Eddie, have dealt with him for years and he didn’t make a real attempt. It's so obvious. Joshua doesn’t want to fight me. “He wants to go to America and fight Miller. That is easy money. One hundred percent this was their plan the whole time."

Hearn reacted to Whyte's statements, denying some of the allegations being made with respect to his effort to finalize a rematch deal for Joshua.

"Of course we were serious about the fight. We wouldn't waste everyone's time with three different offers, we don't do it  for fun. AJ controls the finances and the offers came from AJ. As a WBO mandatory challenger Dillian was due 20 percent and the final offer was considerably more than that," Hearn told Davies.

"Dillian has a perception of his value in the fight, we respect that and we will continue to work with him and grow his stock in the heavyweight division. I like the Joshua-Whyte fight. I do think Dillian deserves a world title shot. The carrot here was if you beat Joshua you become a great star. There is still a chance that this fight could be made in May or June."

[QUOTE=Motorcity Cobra;19482387]At some point in your life you gotta step away from being a fanboy & use your common sense. You acting like you ***** whipped. If all your friends came to you and told you your girl was ****ing…

[QUOTE=Laligalaliga;19482243]Lolx...... Now I can understand the extent of your brainwashing. It's pathetic but you are gone. You can't be redeemed any more. 4belts on the line and a fool like you think a rematch superceed that. You are even a…

[QUOTE=Motorcity Cobra;19482188]You're the only fool believes everybody is lying but Eddie is the only one telling the truth. How do you make it thru each day being that gullible?[/QUOTE] Lolx...... Now I can understand the extent of your brainwashing. It's…

[QUOTE=that g;19482154]i said "in africa", not "all over africa". or are you arguing now that having endorsements outside uk and usa doesn't count for anything? which of those countries you mentioned does wilder have any endorsements in?? mayweather was definitely…

[QUOTE=Laligalaliga;19482139]just one man still has the 4 belts. The challengers want to rip off the champ and are still the ones crying like a girl all over the place. They never cared about the belts, not even wilder. He fooled…