Dillian Whyte Angry, Says He Feels "Betrayed" By The WBC

Heavyweight contender Dillian Whyte (23-1, 17 KOs) was under the impression that he was going to receive a mandatory world title shot against WBC beltholder Deontay Wilder (40-0, 39 KOs).

Whyte was shocked a few days ago, when the sanctioning body ordered him to take part in a final eliminator and deemed that Dominic Breazeale is the mandatory challenger to the belt.

Despite holding the number one ranking for some time, and winning the WBC silver title, Whyte was ordered to fight Cuban heavyweight Luis Ortiz. 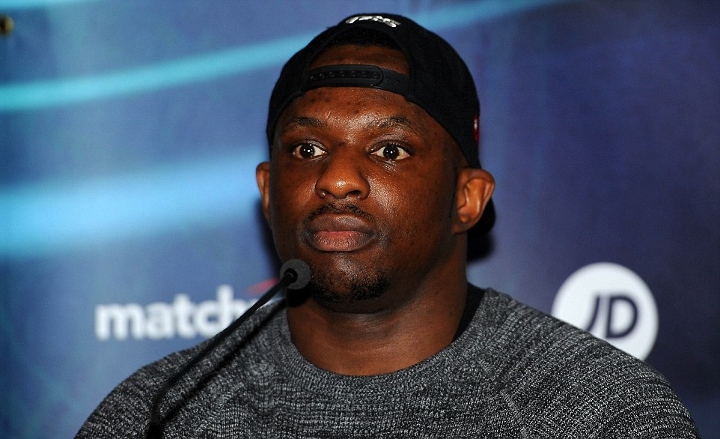 Breazeale apparently beat Eric Molina in what the WBC tabbed as a final eliminator last November.

Whyte is slated to return to the ring in July.

He says the WBC, if they wanted to order a final eliminator, should have made him fight Breazeale.

Instead, it appears that Breazeale will likely fight Wilder in the summer - if a deal is not reached between Wilder and unified champion Anthony Joshua.

"I've fought for every single belt the WBC said I was eligible for. I'm one of the only guys in the WBC who has followed the proper procedure. I fought many eliminators, and many WBC ranking fights. I've been loyal to the WBC for about two years," Whyte told Sky Sports.

"I've had the sanctioning fights, I've done everything they have asked me to do. My information was - I was meant to be next in line. If anything, the WBC should be ordering me and Breazeale to fight in a final eliminator to face Wilder.

Whyte has no need to fight Ortiz. Just stay in line for Joshua rematch and fight bums.

[QUOTE=Illmatic94;18714330]AJ was dropped on his ass by 95 year old retired Wladimir. You point is.. Ortiz flatlines Shyte. That's why he scared.[/QUOTE] AJ was dropped by a former champion who was undefeated in 11 years. The guy fought his ass…

[QUOTE=Ray*;18715282]Wilder doesn’t want to fight Whyte, he already avoided that fight as a voluntary fight. Now they have convienently use the WBC to move Whyte out of the way. Not only that but by naming a Whyte/Ortiz fight “Secondary mandatory”…

[QUOTE=JakeTheBoxer;18720886]This Whyte hype started when he beat Chisora by SPLIT decision. I just think that Whyte knows he is not very good and that he can likely lose against Ortiz.[/QUOTE] A lot of people thought Chisora won that fight as…

This Whyte hype started when he beat Chisora by SPLIT decision. I just think that Whyte knows he is not very good and that he can likely lose against Ortiz.