Richard Commey contends he deserved more time to try to keep his title.

Teofimo Lopez’s destructive right hand had dropped him to one knee, then down again, just 40 seconds into the second round. Commey claims he wasn’t dizzy once he reached his feet and could’ve continued if referee David Fields would’ve afforded him more time to recover in their December 2019 lightweight title fight at Madison Square Garden.

Fields’ decision to stop their scheduled 12-round, 135-pound championship bout 1:13 into the second round seemed completely reasonable because Lopez unloaded a barrage of unanswered power punches on Commey once Fields allowed the action to continue. An exposed Commey was backed against the ropes and either unwilling or unable to throw punches back at an attacking Lopez.

Before he knew what hit him, Commey’s championship reign was over, barely nine months after it began when he stopped Russia’s Isa Chaniev in the second round. The emerging, electrifying Lopez (16-0, 12 KOs) had taken his IBF lightweight title, the belt the unbeaten Brooklyn native needed to secure his coveted showdown with Vasiliy Lomachenko in 2020.

That devastating defeat marked the first time Commey was knocked out in a career he launched in February 2011. Commey’s only previous losses were back-to-back, 12-round, split-decision defeats to former IBF champ Robert Easter Jr. and Denis Shafikov in 2016.

With Smith-Vlasov postponed indefinitely, there’s a brighter spotlight on the Commey-Marinez match, which will headline a show set to start at 10 p.m. EST and 7 p.m. PST. 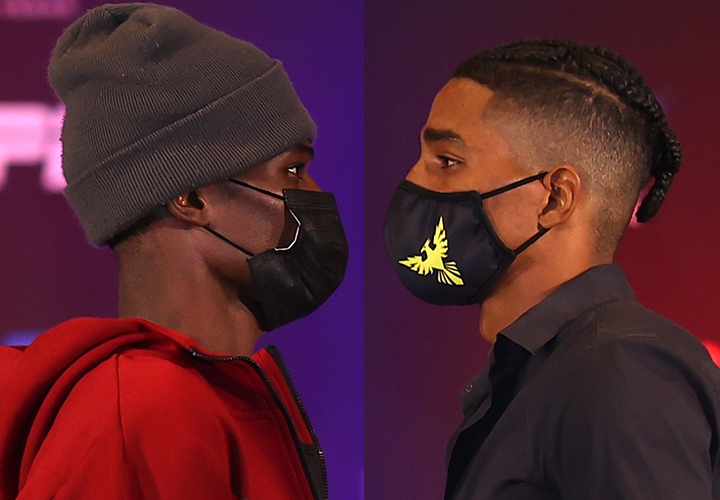 The 33-year-old Commey’s handlers consider it a perfect opportunity for Commey (29-3, 26 KOs) to redeem himself in his first fight since losing to Lopez. They think a revitalized Commey can make a run at another world title in a division loaded with young talent.

“We still believe Richard Commey could be champion again,” Lou DiBella, Commey’s promoter, said during a virtual press conference this week. “And I know Richard believes he can be champion again. We had built into our deal with Teofimo a fight – win, lose or draw – afterward with Top Rank [Lopez’s promoter]. And my conversations with Top Rank basically involved, you know, wanting to make a significant fight for Richard that could help elevate him to championship-level stuff in the future. In order to do that, you have to fight a championship-level guy.

“And everyone on our team had reviewed Marinez’s last fight. I don’t think there’s any of us that believed he had lost [to Rolando Romero]. I think Marinez should be undefeated. I think he absolutely himself is a championship-caliber fighter. But I think he’s someone that Richard will beat. And we wanted to get Richard the most significant fight we could make for him. That’s what the Marinez fight is. … I think it’ll be a great opportunity for Richard to re-establish himself as what we all know he is, which is one of the best lightweights in the world.”

Marinez seemingly did enough to out-point the rugged Romero in that 12-round fight for the WBA interim lightweight title, yet all three judges scored it for Romero.

Frank Lombardi somehow scored 10 of the 12 rounds for Romero, who won 118-110 on his card. Glenn Feldman (116-112) and Don Trella (115-113) had it closer, but Marinez still suffered his first defeat in a bout Showtime televised August 15 from Mohegan Sun Arena in Uncasville, Connecticut.

Marinez might give Commey more trouble than he can handle with his boxing ability, though Commey’s team chose Marinez in part because he is not considered a puncher, nowhere near as powerful as Lopez. Commey’s opponent has won only 35 percent of his pro bouts by knockout, and while credible and risky, Marinez isn’t considered as dangerous as some of the other opponents that were presented as options for Commey’s return from the Lopez loss.

Most Internet sports books have made Commey a 3-1 favorite, in part because Marinez hasn’t faced anyone as accomplished as Commey during his five-year-pro career. DiBella realizes, though, that his fighter has plenty to prove versus Marinez.

“I think if he beats a fighter as good as Marinez and shows the whole world that he’s back to where he was, I think that there are loads of [good fights for him],” DiBella said. “Look, it’s a very talent-rich, star-rich division, with Ryan Garcia and Devin Haney sitting there. You know, there’s Teofimo Lopez still sitting there, though I think [a rematch with Commey is] the most unlikely situation. But there are a lot of other quality lightweights and guys holding belts and championship-caliber fighters. And I think if Richard wins a fight of this significance, he’s certainly not gonna go to something less significant.”