DiBella: Regis Prograis Is Not Fighting Maurice Hooker At 147 Pounds

Maurice Hooker is willing to reschedule his fight against Regis Prograis.

The former WBO junior welterweight champion just doesn’t want to face Prograis at a catch weight of 143 pounds anymore. According to what Brian McIntyre, Hooker’s trainer, told Sports Illustrated’s Chris Mannix on Wednesday, Hooker only wants to reschedule their fight if the contracted maximum is the welterweight limit of 147 pounds.

Lou DiBella, Prograis’ promoter, told BoxingScene.com that Prograis will not agree to fight Hooker at 147 pounds. Prograis still considers himself a 140-pounder and he begrudgingly agreed to fight Hooker at a 143-pound limit only because the 5-feet-11 Hooker contended that he couldn’t get closer to 140 pounds.

“My guy is not a welterweight,” DiBella said. “Once he goes up to welterweight, that’s where he’s gonna stay. But he has unfinished business with Josh Taylor and Jose Ramirez, and we thought Maurice Hooker. And people signed contracts. It used to be that signed contracts meant something. We haven’t said no to anything, really, but my guy is not taking the fight at a weight he doesn’t wanna fight at. Regis is not going to 147 to fight Maurice Hooker.” 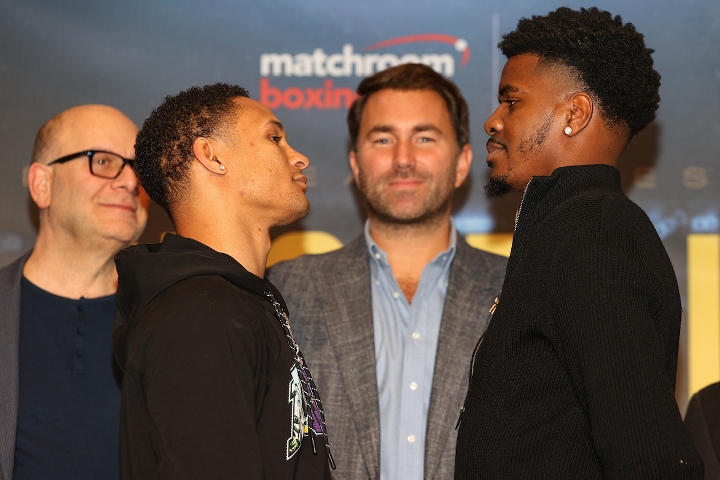 DAZN executives have had talks with DiBella and Hooker’s co-promoters, Eddie Hearn and Roc Nation Sports, about rescheduling the Prograis-Hooker fight for some point in August or September.

The former 140-pound champions were supposed to headline a DAZN card April 17 at MGM National Harbor in Oxon Hill, Maryland. That show was canceled once the COVID-19 pandemic essentially shut down the boxing business in the middle of March.

The 30-year-old Hooker (27-1-3, 18 KOs) weighed in at 144¼ pounds for his last fight, a first-round, technical-knockout victory over Mexico’s Uriel Perez (19-5, 17 KOs) on December 20 at Talking Stick Resort Arena in Phoenix. That was the Dallas native’s only appearance since WBC/WBO champ Jose Ramirez (25-0, 17 KOs) stopped him in the sixth round of their 140-pound title unification fight July 27 at College Park Center in Arlington, Texas.

The 31-year-old Prograis has fought at the welterweight limit once, in April 2014, and above it one other time, at 151 pounds in November 2013. Those were low-level fights early in Prograis’ career, however, before the strong southpaw became completely committed to the 140-pound division.

Some of us are sitting here "weight-shaming" Prograis while Hooker has a history of struggling to make weight. Either Hooker needs to move on to other business at 147 that we KNOW he'll have problems with, or make the 143…

[QUOTE=1hourRun;20606003]I'm surprise to see you here, Peter Fury. I thought you stopped watching mens boxing considering you now train women. I heard you have to change your strategies for Savannah Marshall, as you [B]were[/B] accustom to 3 minute rounds, not…

[QUOTE=petero;20605946]They will all be on the sidelines watching the Tartan Tornado gather up ALL the belts at 140[/QUOTE] I'm surprise to see you here, Peter Fury. I thought you stopped watching mens boxing considering you now train women. I heard…

[QUOTE=1hourRun;20603929][img]https://i.imgur.com/sIo5S3n.gif[/img] Former IBF jr. welterweight champ Ivan Baranchyk is taking on Jose Zepeda, presumably later this year. Both are highly ranked by the IBF-WBC-WBO. Regis Pro and Dibella need to hustle otherwise 'Rougarou' maybe sitting on the sidelines watching the…

[QUOTE=Mister Wolf;20604945]So while Taylor and Ramirez move up to the big leagues this guy plans to stay behind to play gatekeeper to some kids.[/QUOTE] I haven't heard that Taylor and Ramirez are moving up and I wouldn't call Regis Prograis…