Promoter Lou DiBella and manager Keith Connolly instead emphasized Derevyanchenko deserved to defeat Golovkin in their 12-round middleweight title fight at Madison Square Garden. An extremely determined Derevyanchenko gave Golovkin perhaps the most difficult fight of his 13-year pro career, but he lost a unanimous decision that left Derevyanchenko’s representatives requesting a rematch.

What bothered DiBella most is that narrowly losing a unanimous decision denied Derevyanchenko what he is convinced should’ve been a magnificent moment for this courageous contender.

“Triple-G has already cemented his legacy,” DiBella said during the post-fight press conference. “He’s done it many, many times. And he is already gonna go down in history. Tonight was Sergiy’s night. That was his moment. And I just feel gutted for him that – I’m not gonna call the judges’ decision a robbery. I mean, I’ve seen robbery robberies. This wasn’t a robbery. But Sergiy was robbed of his defining moment.” 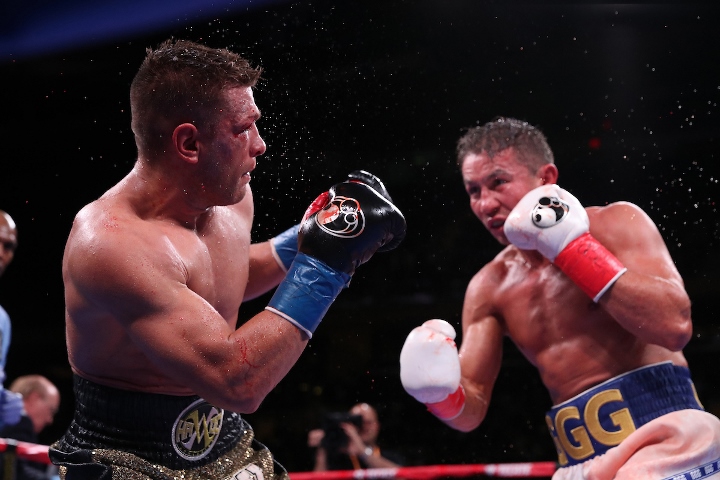 Lombardi and Molinski scored seven rounds apiece for Golovkin, who won by three points on their cards because he recorded a knockdown in the first round. Morgan scored six rounds apiece for Kazakhstan’s Golovkin and Ukraine’s Derevyanchenko, but that knockdown accounted for the one-point difference on his card.

“You know, I just looked at my Twitter feed for two minutes,” DiBella said. “And a lot of people were aghast that people were booing Triple-G. And I put up a Tweet, because I really mean this. They weren’t booing Triple-G. Nobody in their right mind would boo Triple-G. No fight fan can boo Triple-G. Triple-G is one of the great fighters in the history of our game, one of the great guys in the history of boxing. And by the way, he fought a great fight tonight. He just didn’t win. And they were booing what they just thought was an unjust decision. I’m not gonna use the word robbery.

“But do I think it was a just decision? No, I don’t. I never will. I was scoring the fight as honestly as I could. I wasn’t sitting there, giving rounds I didn’t think my guy won, to him. And I scored it 8-4 in rounds. I mean, I thought that [the first round] was a two-point round, obviously. But I had it a three-point fight. I didn’t go into the ring necessarily believing we were gonna get the decision because the star, you know, this happens so often in our sport. But tonight was Sergiy Derevyanchenko’s night. It was.”

Connolly commended Derevyanchenko (13-2, 10 KOs) for fighting through a first-round knockdown Connolly and DiBella insist was the consequence of a foul, as well as that nasty gash over his right eye.

“I think the public should demand a rematch,” Connolly said. “I’m not gonna say it was a robbery because I don’t wanna sound sour, even though I am a little sour. But that was a clear-cut victory for Sergiy tonight.”

[QUOTE=Boxing Hero;20106932]I couldn't agree more. Just because ggg went the distance with Canelo in the first fight they called it a draw. Some people started crying robbery. But Canelo clearly won the fight. The most you could have given ggg…

[QUOTE=ladiesman217;20106895]When the heavily favored fighter does not dominate, the audience tends to give the underdog too much credit that if the fight is close, you have to give it to the underdog. I hate that mentality![/QUOTE] This is one of…

Props to both! I would like to see a rematch. If Golovkin and Canelo never fight again that would be fine with me but a rematch with SD would be a good one.

I get that some people have the urge to call it a robbery but it really wasn't. That was a close fight with several swing rounds and a KD. SD won one round clearly and GGG won one or two…

Whatever the case is, there is nobody out there that made GGG look more human than the Technician. I thought Derev won. Completely outboxed him. GGG looked clueless and frustrated in there. GGG is the de facto, protected asset, because…