Diaz: To Win World Title On Super Bowl Card Is Opportunity Of A Lifetime

Joseph 'Jo Jo' Diaz didn’t expect to wait as long as he did to get his second crack at a major title, but can certainly appreciate having to be made to work for the opportunity.

Nearly two years after suffering a 12-round title fight loss to Gary Russell Jr. for his lone career defeat, the 2012 U.S. Olympian is back on the title stoppage. Four wins have paved the way for a crack at defending 130-pound titlist Tevin Farmer, with their bout as part of a loaded Super Bowl-themed show taking place January 30 in Miami, Florida, mere miles from the site of Super Bowl LIV.

“It wasn’t an easy road back but I’ve been ready for this opportunity to fight for another world title,” Diaz (30-1, 15KOs) told BoxingScene.com. “Losing to Gary Russell, then missing weight for my win over Jesus Rojas (in August 2018) which cost me the (secondary) featherweight title, it told me that I had to get my mind and body right if I wanted to win a world championship.

“Moving up in weight and winning three more times, I feel like everything is clicking and I’m ready for this fight. Of course, I still had to do more than that in order to get this title shot, but it’s here and I’m just excited to be part of this show.” 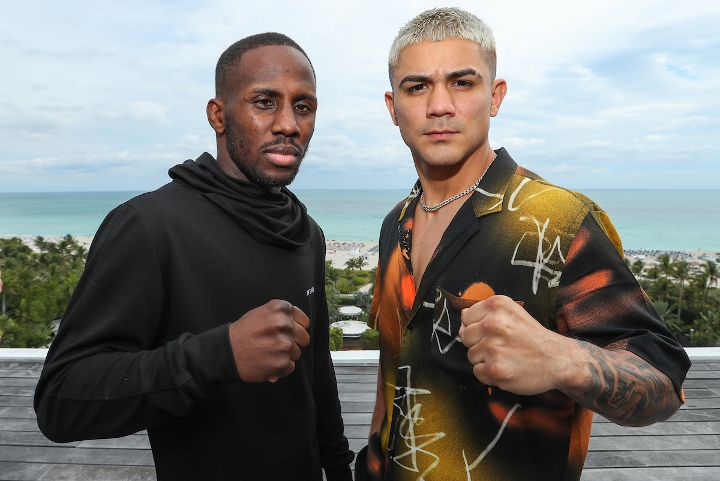 A key tactic in landing a crack at Philadelphia’s Farmer (30-4-1, 6KOs) was engaging in a feud through social media, which ultimately spilled over into real life. The two had to be physically restrained after going face-to-face jawing at one another in Las Vegas, just days ahead of Diaz’s win over Freddy Fonseca last May.

Their rivalry had been long established by that point, with the two continuing to go back and forth through Twitter. It was enough to prompt their handlers—Golden Boy Promotions for Diaz, DiBella Entertainment and Matchroom Boxing for Farmer—to work out terms to finally get them in the ring. The pair of southpaws were hoping to have fought by now, with several potential dates coming and going before landing in South Beach.

“That’s the best part of it, besides fighting for the world title,” Diaz noted of the event taking place three days before the Super Bowl. “There will be tons of celebrities in town and at the fight. The YouTube guys (Jake Paul and AnEsonGib, who fight in the evening’s chief support) will be bringing in all their fans who probably don’t watch boxing but will be watching that night.

“Obviously I wanted to fight for the world title sooner than this, but it worked out this way for a reason. Now I have a chance to dethrone Tevin Farmer on a show that everyone will be watching, making a lot of new fans and making sure all these people who don’t normally watch boxing have a reason to tune in that night and every time I fight.A chance to win the world title on (the Super Bowl card), is an opportunity of a lifetime. I want to be defined by beating the best and now I get to do it in front of more fans and viewers. I have a chance to become a world champion and a star all in one shot.”

This is self sabotage. Stop putting underpowered fighters against one another on these big cards. No one new to the sport is going to see Farmer and think “whoa, this is exciting. Let’s see more of that!” Put some knockout…

Diaz didn't look convincing in his previous fight but neither did Farmer. If I had to pick, I'd go with Farmer by UD since he is a slick fighter and could outbox Diaz, but we'll see what the outcome is.…

I think Farmer out boxes him

Hearn really screwed over Farmer.....used him as bait to try to lure Davis to dazn and then completely discarded promoting him. Farmer and DiBella are idiots for staying with Hearn. Now that Hearn saw Davis leave the division, you don’t…

I been waiting for this fight!