Christopher 'Pitufo' Diaz made sure to stay ready for any big opportunity to come his way.

At the same time, that was never to be mistaken for accepting just any opportunity. That stance led to his upcoming fight with New Mexico’s Jason Sanchez (15-1. 8KOs), which takes place Tuesday evening live on ESPN (8:00 p.m. ET/5:00 p.m. PT) from MGM Grand Conference Center in Las Vegas, Nevada.

“I’m happy with this fight, I’m facing a real opponent who has already fought at the championship level,” Diaz (25-2, 16KOs) told BoxingScene.com. “I was already in training camp for about seven weeks by the time I got the call to ask if I wanted to fight on ESPN. I’m always in shape, but didn’t want to fight against just anybody.

“They first offered an opponent whose name I never bothered to remember. I wasn’t happy with it, the fight wasn’t going to do anything for my career.” 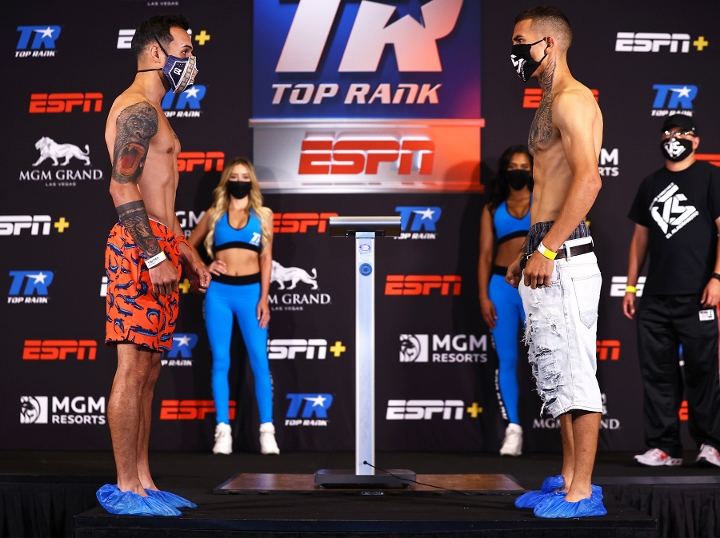 With that came the decision to pair him up with Sanchez, a solid mid-level contender from Albuquerque similarly eager to return to the title stage. His lone career loss came in a 12-round clash with what would serve as the final featherweight title defense for unbeaten Oscar Valdez.

“He gave Oscar Valdez a tough test,” Diaz recalls of their clash which aired live on ESPN last June in Reno, Nevada. “He’s still hungry and that’s what I want, somebody who wants to beat me.”

Diaz remains a featherweight hopeful, eager to move past two previous losses he fully intends to convert into learning lessons. The 25-year old contender from Barranquitas, Puerto Rico came up well short in a failed bid for a junior lightweight title, dropping a 12-round decision to Japan’s Masayuki Ito in July 2018. The bout was the last time Diaz campaigned at 130 pounds, since dropping back down to featherweight where he will fight for the fourth straight time.

A 10-round loss to Shakur Stevenson (14-0, 8KOs)—a 2016 Olympic Silver medalist and now a reigning World Boxing Organization (WBO) featherweight titlist—marks his lone blemish over that stretch. Stevenson made his 130-pound debut earlier this month, kicking off Top Rank’s post-pandemic boxing series on ESPN with a one-sided 6th round stoppage win over Puerto Rico’s Felix Caraballo. The bout could serve as the start of a run toward becoming a two-division titlist, which would in turn free up at least one belt at featherweight.

Diaz is currently ranked at featherweight by the WBO and who would love to punch his way to the top of the queue. With that desire came the insistence to take on a challenge as purposeful as his fight on Tuesday. It serves in supporting capacity to Australia’s Andrew Moloney who makes his U.S. debut and first defense of his WBA “Regular” 115-pound title versus Joshua Franco in the evening’s main event.

“This is why I wanted to fight someone like Jason Sanchez,” insists Diaz. “Watch, our fight will be the fight of the night. I know I’m ready for this, and to once again fight for the world title. All my focus is on [Tuesday] night. Once that’s done and my hand is raised, I would love to start looking at fighters like Michael Conlan, Jessie Magdaleno, those guys ranked ahead of me right now.

“There’s a lot of big fights to be made in this division. So, I want to make my own statement. When I was training to stay in shape, I was focused but still not sure what was next. Once I got that call to fight this guy, my focus went from 80% to 200%. It’s now or never. I have to win on Tuesday to keep my career moving. After this fight, everything will change.”