Devin Haney’s place is secure on the Nov. 9 DAZN card, even as the hunt remains to finalize an opponent for the occasion.

The unbeaten lightweight will enjoy his fourth fight of a breakthrough 2019 campaign, as he will serve in supporting capacity to the rematch between (and respective pro debuts of) YouTube celebrities KSI and Logan Paul. The show takes place at Staples Center, marking the first career appearance in the greater Los Angeles area for Las Vegas’ Haney (23-0, 15KOs), who turns 21 a week after the event.

An official challenger has yet to be named for the bout, although veteran contender Petr Petrov (41-6-2, 22KOs) has been named as a potential leading candidate. 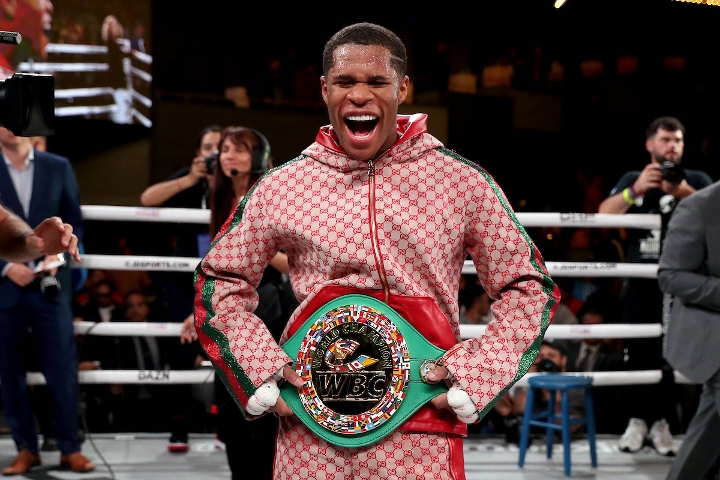 Eddie Hearn, Haney’s co-promoter mentioned Petrov—a Russia-born lightweight who is now based out of Spain—as a possible choice in a recent interview with IFL, noting that a formal announcement is expected within the next week or so.

Haney is coming off a sensational four-round stoppage of previously unbeaten Zaur Abdullaev this past September in New York City. The bout marked his second straight DAZN headliner since signing with Hearn earlier this year, along with picking up the interim version of the World Boxing Council (WBC) lightweight title, with the full version among the three belts in the possession of Vasiliy Lomachenko.

Whether or not the title will be at stake in November could also dictate the level of opponent which will be approved. Petrov is not currently ranked in the WBC Top 15, although that status could change over the course of the sanctioning body’s annual convention which takes place Oct. 20-26 in Cancun, Mexico. It is not uncommon for boxers to suddenly emerge in—or disappear from—the rankings, though often coming upon review of a formal request made by said athlete’s representatives.

Should the assignment go to Petrov, it will serve as poetic justice in being denied a previous opportunity to appear on DAZN. The 36-year old former title challenger was ready to jump in on less than one day’s notice to face Ryan Garcia, who was left without an opponent for a planned Sept. 14 fight in Carson, California following the same-day apprehension and arrest of originally scheduled Avery Sparrow. Garcia dropped off the card altogether, leaving Petrov to stick with previous plans—a showcase fight on a Sept. 20 card in Ontario, California, where he emerged victorious to extend his current three-fight win streak. The run follows back-to-back losses to then-unbeaten foes Terry Flanagan—for a lightweight title—and Ivan Baranchyk prior to the latter’s super lightweight title reign.

Regardless of opponent selection, the placement will help Haney mark time while awaiting a mandatory crack at Lomachenko while hoping to raise his profile among a new demographic.

Another significant undercard has previously been announced, as unbeaten two-division and reigning super middleweight titlist Billy Joe Saunders (28-0, 13KOs) faces Argentina’s Marcelo Coceres (28-0-1, 15KOs), who moves up from middleweight for his first career title fight. Both boxers will make their respective debuts in the United States in the contest, which will mark Saunders’ first defense of the 168-pound title he claimed in a 12-round win over Shefat Isufi this past May in Stevenage, England.

[QUOTE=Mateuz asato;20132676]How did you arrive at the conclusion[/QUOTE] Well that's a good question. Cuz on my other thread I talk about how more seasoned members might be more qualified to make those assumptions... But for me, the first thing obviously…

[QUOTE=CauliflowerEars;20130451]:beerchug: I started a thread yesterday inviting all to name and identify the [I][SIZE="3"]"Alts"[/SIZE][/I] that are active now. It will give us a clue as to who the Alts are and give them a chance to come clean (obviously doubtful).…

[QUOTE=Lomasexual;20129452]Assess yourself. Why go to the effort of creating an alt? Is it really so important to post stupid comments that you need to create alt accounts to do so? Find out a way to get some self respect. Your…

No worries, with "The Creep"Eric Bottjer I'm sure they will dig some bum up, he's good at that type of matchmaking.