Devin Haney Only Moving Up To 140 For Mikey Garcia

Former lightweight champion Devin Haney (24-0) is progressing well from right shoulder surgery after his November unanimous decision victory over Alfredo Santiago. He relinquished his title when he learned that his injury would require him to go under the knife and is now the champion in recess.

His father Bill recently said that a move to 140 may be necessary in his next fight because none of the top names in the lightweight division are willing to face him. Devin, however, said that there is only one name that he is willing to move up for at the moment. 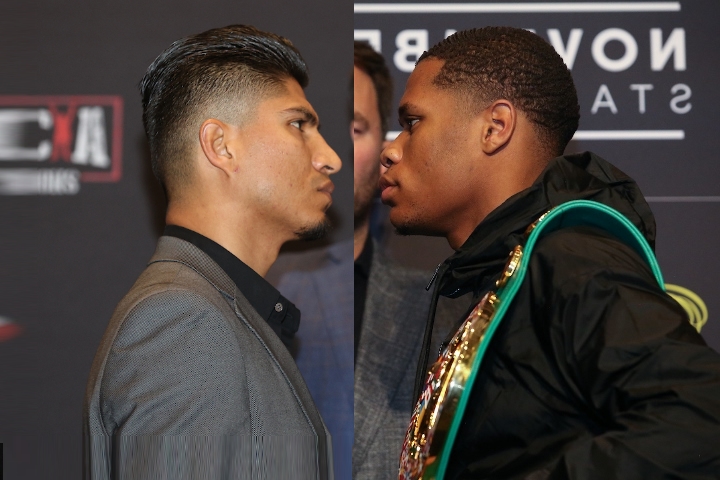 Garcia was in action on February 29th when he scored a knockdown against Jessie Vargas in route to a unanimous decision in Frisco, Texas. Vargas was having a lot of success until he was caught and dropped in the 5th round.

“I think that Vargas was doing good. He was letting his hands go and using his speed. He was touching Garcia but Garcia, his ring IQ and his experience was the difference in the fight,” Haney told BoxingScene.com.

Haney is targeting a date in July for his return to the ring where he will have a chance to test out his shoulder.  In a perfect world Haney would face Garcia after his summer bout.

“I wouldn’t say the July fight. I would need a fight back to get back in my groove and get back into the swing of things and after that I would love to. Me against Mikey Garcia is a huge fight and I would rather have a different type of opponent for my first fight back,” said Haney.

As far as the lightweight division, Vasiliy Lomachenko and Teofimo Lopez are scheduled to face each other in a three belt unification fight.  Haney says he isn't interested in that fight because Top Rank chairman Bob Arum has already said that he isn't interested in having either fighter face Haney anytime in the near future.

“I really don’t even care about they fight to honest. Neither one of those guys or Arum have no intentions of fighting me so I really don’t plan on speaking on it,” Haney stated.

No way Haney will do any damage to Garcia. It will be Mikey inside 12 or a wide UD...

I know Devin Haney is unknown, have talent and he going to get better, but I feel that Mikey Garcia is going to defeat him in this current point. We need to see more of Devin Haney against a true…

[QUOTE=vitruvian;20503608]Only two guys (really one) that have a chance against Mikey down there are Loma and maybe some day Ryan Garcia. I don't think Lopez, Davis, or Haney would last too long against Mikey Garcia. I would certainly entertain any…