Devin Haney: I Agree With Floyd Mayweather - There Are Too Many Belts In Boxing

Floyd Mayweather Jr. had a full-blown tirade last week criticizing sanctioning bodies and promotional companies, including his own, for bestowing too many belts on boxers, and for enabling the “champion” billing on pugilists.

The WBA’s true champion, labeled as the “super” champion, is Teofimo Lopez, who also holds the IBF, WBO and WBC Franchise titles following his win earlier this month against Vasiliy Lomachenko. 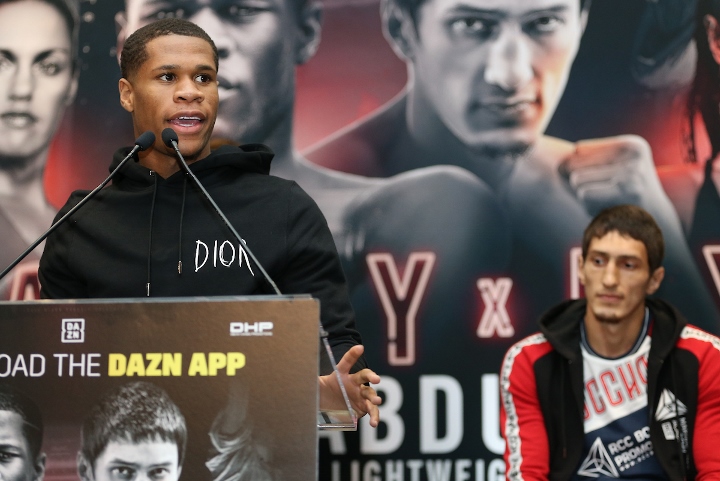 The WBC’s lightweight champion is Devin Haney, who was elevated from interim to full champion last year once the former champion Lomachenko was elevated to his Franchise status. The move made many in boxing circles call Haney an “email” champion because he never actually fought for the title he owns.

Haney said he’s just one of the many fighters who are victims regarding the proliferation of too many belts in the sport, and the problems they present to fans — many of which are left with a muddy picture of who the actual champion is.

“I don’t think that [Mayweather Jr.] told a lie. There are too many belts. That's the problem, in the lightweight division. When people have mandatories, they make a whole new belt for guys to duck and get out of a fight. I definitely agree with [Mayweather Jr.],” Haney told Sean Zittel of Fight Hype.

The Las Vegas-based Haney is a close confidant of Mayweather Jr., as he’s had an increasingly growing relationship with the Fighter of the Decade in recent months.

“When Floyd said that, people were coming at me. But I'm just like, 'I agree!' ... I was the mandatory, I didn't ask for [the WBC] franchise belt, I never asked for another belt. I wanted to fight the mandatory [Lomachenko]. I worked my way [to Lomachenko] ... That's not my fault. Top Rank and Loma asked for the [WBC Franchise belt]. I would never ask for a Franchise title. If I were to fight Lopez, I would not petition to fight for the Franchise title. That's not my thing. That's not something I'm interested in because I want to make the best fights happen."

Mayweather’s diatribe on Showtime’s YouTube channel was a long one during the media workout of Davis ahead of his PPV showdown Saturday with Leo Santa Cruz.

He echoed many of the sentiments shared by fans and principles involved from every corner of the sport.

“I wanna say this right now about the sport of boxing, and I want everybody at home to hear me when I say this — a belt, I’m tired and [when] I’m at home – and this goes for any company. I don’t care if it’s Top Rank, if it’s Golden Boy [Promotions], if it’s Mayweather Promotions, if it’s PBC — there’s too many champions in the sport of boxing right now,” said Mayweather Jr. “Too many champions. It’s not a such thing as a super champion, not at all. And I’m not taking nothing away from no fighter. It’s too many belts.

“Now, we look at the lightweight division, OK. And I wanna say the fight the other day [Lopez-Lomachenko] was a hell of a fight. Congratulations to the winner. He done his job. He went out there and did what he had to do. But if Devin Haney is the WBC champion at lightweight, right, and Gervonta ‘Tank’ Davis is the WBA champion, now it’s safe to say that Teofimo is the IBF and the WBO champion. But I can’t knock what he has done, because I have to take my hat off to him, you know, for what he has done.”

“I don’t wanna knock no fighter, but I’m tired of seeing fighters after the fight, everybody got a championship belt now,” Mayweather said. “Now boxing, all these belts is like trophies. The WBC, the WBA, the IBF and the WBO, y’all have to clean this sh-t up. Y’all have to clean this up. This is bad for boxing. Ain’t a such thing as no super champion. You guys are just taking extra money from all these fighters, getting extra money from sanctioning fees. And this goes for my company as well. We gotta clean this sport of boxing up. This sh-t, this don’t look good. When you look on TV now, everybody’s a champion. You see all these fighters posing with a belt.”

Blacks are mad because a latino has all the belts if haney or davis had the belts we wouldn't be seeing this sudden complaining about too many belts.

We the fans been saying this long before Floyd!

[QUOTE=tokon;20849402]Yes, I don't disagree with anything you say but "boxing" supports the alphabet organisations, not the other way around. Don't ask for sanctioning, don't pay the fees, see where they go.[/QUOTE] True it's more of a symbiotic relationship. I'd just…

[QUOTE=Eff Pandas;20847452]The problem for boxers is they got bigger problems than making a stand against ABC groups. They gotta worry about the guy they are fighting trying to knock their ass out & staying in shape & other sh^t like…