Devin Haney handled an opponent considered perhaps the most challenging of his three-year pro career like a seasoned, special fighter Friday night.

The unbeaten Haney picked apart Xolisani Ndongeni to the head and body, and soundly defeated him in their 10-round lightweight fight in Shreveport, Louisiana. Haney dropped Ndongeni during the second round, but he wasn’t able to hurt him bad enough to drop the resilient South African contender again in the main event of a “ShoBox: The New Generation” tripleheader at StageWorks. 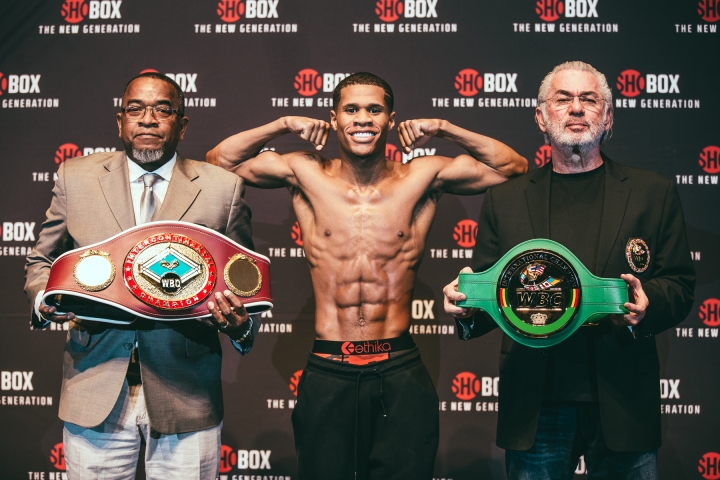 The 20-year-old Haney improved to 21-0 and inched closer toward the lightweight world title shot he covets.

About the only thing Haney didn’t accomplish, much like in his previous decisive victory over Mexico’s Juan Carlos Burgos, was record a knockout.

South Africa’s Ndongeni, 28, lost for the first time in his eight-year pro career (25-1, 13 KOs) in what was an even bigger step up in class for him than it was for Las Vegas’ Haney.

Before Friday night, Ndongeni had fought just once outside of South Africa. His previously unblemished record had been built largely against veterans from his home country, some of whom were past their primes.

In his first fight on American soil, Ndongeni defeated Mexico’s Juan Garcia Mendez (then 19-1-1) by unanimous decision in a 10-rounder Showtime televised in November 2016 from Corona, California.

Though clearly losing, Ndongeni fought back as Haney stalked him and went for the knockout in the 10th round. Haney had him backed against the ropes and holding late in the 10th, but he couldn’t finish Ndongeni.

Haney really tried to top Ndongeni during the ninth round. He unloaded an array of body and head shots, but he couldn’t drop Ndongeni again. Ndongeni offered just enough resistance, too, to make Haney realize he had to respect his opponent.

In the final seconds of the eighth round, Haney hit Ndongeni with two hard lefts to the body and several hard rights to his head.

Ndongeni mounted a minor comeback early in the seventh round, when he landed to Haney’s body, backed the younger, faster fighter into the ropes and landed a right hand to the head. Haney responded, though, by landing numerous right hands, including an uppercut, during the second half of the seventh round.

Haney had a terrific fifth round, but Ndongeni got back into what was developing into a one-sided fight during the sixth round. He handled Haney’s body shots better in the sixth and landed enough clean shots of his own to keep the match competitive.

Haney’s vicious right to the body badly hurt Ndongeni at the 35-second mark of the fifth round. That shot sent Ndongeni into retreat mode for the remainder of the round.

A right hand to the body by Haney made Ndongeni back away from him with a little under 1:10 to go in the fifth round. Haney connected with an overhand right to the side of Ndongeni’s head just before the two-minute mark of the fifth round.

Haney landed a left-right combination as Ndongeni backed into the ropes just after the midway point of the fourth round.

While Ndongeni was moving backward, with his hands down, Haney caught Ndongeni with a short, chopping right hand that knocked him to the seat of his trunks at the 1:34 mark of the second round. Ndongeni got up quickly and fended off an aggressive Haney well enough to make it to the end of the second round.

Toward the end of the second round, Haney drew a warning from McDaniel for attempting to hit Ndongeni with a punch he threw over his shoulder, as Ndongeni stood behind him.

Haney and Ndongeni each spent the first round trying to establish his jab.

Ndongeni’s best punch of round was a right hand that landed to the side of Haney’s head with 51 seconds left in it. Haney began landing during the final 20 seconds of the first round, though – first with a straight right hand, then with a right-left combination and finally with a flush right hand just before the bell sounded.

[QUOTE=Mcphilly84;19425715]Let's all calm down about Haney. Which other fighter in the Ring or Boxrec top 10 is he actually going to beat? I get it - he looks like a strong boxer, he has good timing, strong jab and short,…

[QUOTE=Kannabis Kid;19425951]Na man just na you are giving this South African who kept his hand low the entire fight and couldnt throw a straight punch to save his life more credit than he deserves I will never post on this…