Last week it emerged that Sergiy Derevyanchenko would not face the now-former IBF world middleweight champion Saul 'Canelo' Alvarez, with the sanctioning body ordering Derevyancehnko to face Gennady Golovkin, with a date looking to be set for late September/October.

Derevyanchenko, after spending time in Ukraine, is set to return to the United State  to train for Golovkin, and will initially return to the New York base of Andre Rozier and Gary Stark Sr this week to prepare for his second attempt at the world middleweight title.

One of Derevyanchenko's trainers comes in the form of New York famed trainer Andre Rozier, who has given a preview on what steps will need to be taken by his Ukrainian charge in order to be victorious against the former WBA WBC, IBO and IBF world middleweight champion. 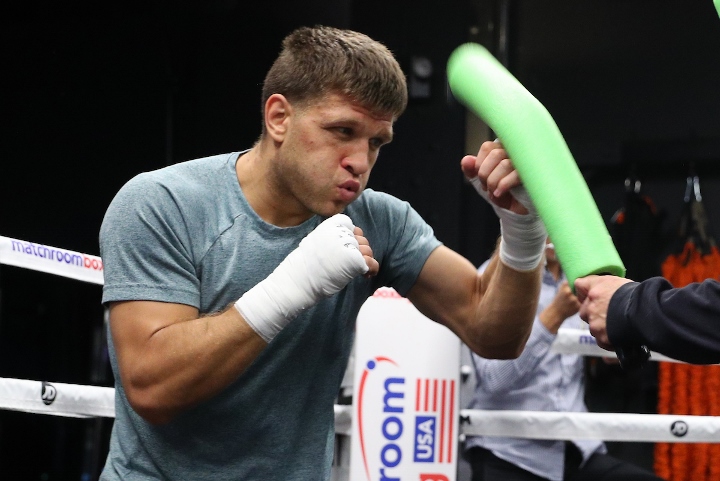 The Brooklyn native, Rozier, opened up on his plans for Derevyanchenko for this camp

He said, “This fight is the biggest of Sergiy’s life so he will have mine, Gary Stark Sr, Terrence Simpson, Lenny Wilson and the whole of the Havoc Team’s undivided attention for this training camp and we believe all of us working together will provide Sergiy with the preparation that he needs to beat Golovkin.

“We haven’t decided where the camp will take place yet as Sergiy has a big input in that. We may head out to the excellent SNAC facility for this one as we want to give Sergiy every advantage going into this fight. The fact that we aren't facing Canelo changes nothing, if anything it motivates us more as I believe this is a harder fight."

Rozier is no stranger to the threat of Golovkin, having been in the opposing corner to the Kazak star on two previous occasions with Curtis Stevens and Daniel Jacobs. The incredibly busy trainer of 7 world champions who also heads up Havoc Management and Advisory, as well as Havoc Media & PR, gave his take on the challenges that GGG will face.

Rozier stated, “In my opinion, GGG is an undefeated fighter. I believe and most of the world believe that he won both Canelo fights. He is a tremendous fighter but Sergiy is too and  I believe Sergiy will emerge victoriously. His skill set is unique to the middleweight division, he makes very few mistakes that Golovkin can take advantage of and he is much fresher as a professional.

"It's these components that will make the fight the most competitive of Golovkin's career and will be what Sergiy needs to emerge as the new IBF middleweight champion in a couple of months time. From a trainer's perspective, I've had two attempts at Golovkin already but I am certain that the third time will be a charm as Sergiy is a completely different animal than I've ever taken into battle with Golovkin before.”

[QUOTE=Truth Serum;19982358]Warning. This video contains actual footage of the fight. Canelo Supporter discretion is advised. [/QUOTE] artorias boxing?!?! That dude has the worse [B][U]edited[/U][/B] videos, no rounds or time on the rounds :lol1:

[QUOTE=Truth Serum;19982332][B]It's the other way around. That video is like Kryptonite to a Canelo PED Sympathizer![/B] Read the comments in that vid. It'll convert you into a Canelo hater like the rest of them Need a link, Superman?[/QUOTE] You can't…

[QUOTE=j.razor;19974583]And what where the times left in each round of each punch that "landed"?[/QUOTE] Warning. This video contains actual footage of the fight. Canelo Supporter discretion is advised. [url]https://youtu.be/yHClg4dqMFk[/url]

[QUOTE=j.razor;19982061]Funny how NO Sissy-g fans want to go through the video. :lol1:[/QUOTE] It's the other way around. That video is like Kryptonite to a Canelo PED Sympathizer! Read the comments in that vid. It'll convert you into a Canelo hater…

[QUOTE=Truth Serum;19975292][B]Watch it for yourself [/B]instead of being indenial. Someone else put a Youtube vid of the 2nd fight with every confirmed punch landed. Let me know your thoughts![/QUOTE] Funny how NO Sissy-g fans want to go through the video.…