Depressed Thurman Worried Whether He Would Ever Fight Again

He had been off for so long, right in the middle of his physical prime, the injury-plagued welterweight champion couldn’t help but wonder whether he’d ever box again. Thurman admitted during a conference call Tuesday that he endured some dark days in 2017 and 2018, when he tried to recover from elbow surgery and a hand injury.

Thurman initially thought that he’d return to the ring in May 2018, a full 13 months after he had surgery to remove calcium deposits from his right elbow. Subsequent damage to his left hand prolonged an already lengthy layoff until January 26, when Thurman came back to beat game underdog Josesito Lopez by 12-round majority decision at Barclays Center in Brooklyn. 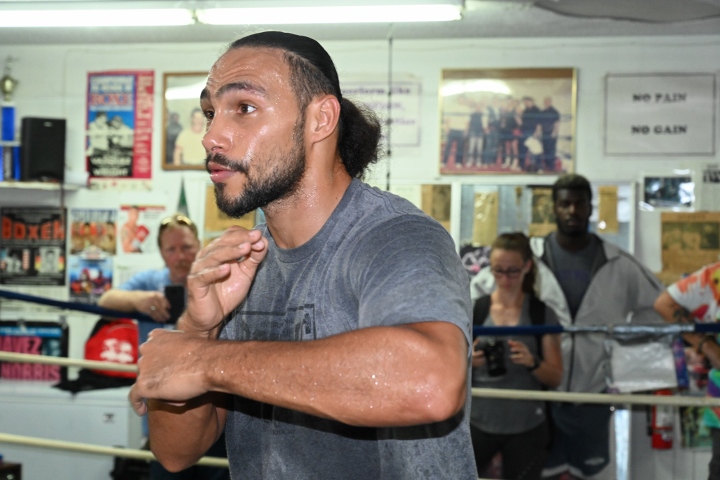 The 30-year-old Thurman had to survive some troublesome moments in the seventh round against Lopez. His victory still led Thurman (29-0, 22 KOs, 1 NC) to the biggest fight of his career, a showdown with Filipino icon Manny Pacquiao (61-7-2, 39 KOs) on July 20 at MGM Grand Garden Arena in Las Vegas.

With that FOX Sports Pay-Per-View bout barely a week away, Thurman detailed his mental state when it seemed like this type of career-defining fight might never materialize.

“I’m a very passionate individual,” Thurman said. “I’m a dreamer. It’s in human nature [that] not every day is gonna be our best day. And, for me, my thought process started to get a little morbid, you know? I started having to ask myself the question, ‘Are you ever gonna fight again? Is your career over at the age of 28, 29 years old? Are you done? Is all that you’ve accomplished all that you’ll ever accomplish in your career?’ And, if so, you know, I mean it’s sad, it’s upsetting. It’s still something to be proud about, being a two-time world champion, unifying the WBA with the WBC, when I defeated the undefeated world champion, Danny Garcia, at the time. But, you know, I’m still in my prime, so it was quite depressing to start thinking like that.”

Returning to trainer Dan Birmingham’s gym in St. Petersburg, Florida, helped Thurman get out of that funk. Slowly but surely, the weight he had gained came off and Thurman started feeling better about himself.

“Obviously, I got myself out of that train of thought,” Thurman said. “And getting in the gym also helped because as you’re not training, you’re not feeling good, either. As you train and you lose weight, everybody feels better about themselves. And training is a natural way to increase endorphins in the brain. Like I said, we’re human. Not every day can be your best day. I had some depressing moments and some thought patterns at that time.

“But luckily for me, my doctors kept encouraging that [I] will be back. And I could’ve got back at the end of 2018, but I talked to my team, I talked to my wife and I was encouraged that nothing good was coming out of 2018. So, let’s just wait for 2019. Let’s start fresh. Let’s hit it in January. And, you know, patience can be a virtue sometimes. And I believe we’re having a tremendous year. And I’m obviously a lot happier, to be back in the sport.”

[QUOTE=Southpawology;19892969]Fell in love got married and then got soft. The best fighters are raging womanizers.[/QUOTE] This is what I have been saying! Not the second part though. Keith hasnt seemed like his heart is in it and I wouldnt be…

[QUOTE=T.M.T;19892986]i'm to the point where i don't like thurman period.[/QUOTE] Personally I much prefer his personality to the boring as hell Spence. At least Thurman has some personality and charisma.

[QUOTE=buddyr;19893067]what took you so long? He's been a clown. The best thing for the welterweight division next saturday is for Pac to win. [B]If Thurman wins, he's gonna sit on that victory for the next year and a half with…

It's funny how he gradually changed his tune from talking smack to PAC and then feeling demoralized. Manny retire this guy already!!!