In a bout that saw Tyson Fury control large portions of the fight with his ring generalship but also saw Deontay Wilder score explosive knockdowns in rounds nine and the ultra-dramatic 12th. In the end, the bout was a poorly received split draw.

Fury out-landed Wilder 84-71 overall, 46-40 jabs and 38-31 power and in the round-by-round breakdown, Fury led 9-3 in total connects and landed power punches as well as 6-2-4 in landed jabs, but while Fury won his rounds by mostly small margins (two or fewer connects in seven of his nine rounds in terms of total connects), Wilder won his rounds by larger gaps (2, 6 and 6, with the final two figures being the knockdown rounds of nine and 12). That dynamic might explain the wildly divergent scorecards.

Rematch anyone? Wilder landed just 17% of his power shots after landing 55% in his previous 8 fights. Fury limited Wilder to 71 total connects (6 per round) and Klitschko to 52 (4 per round). Heavyweight avg. is 15 landed per round. 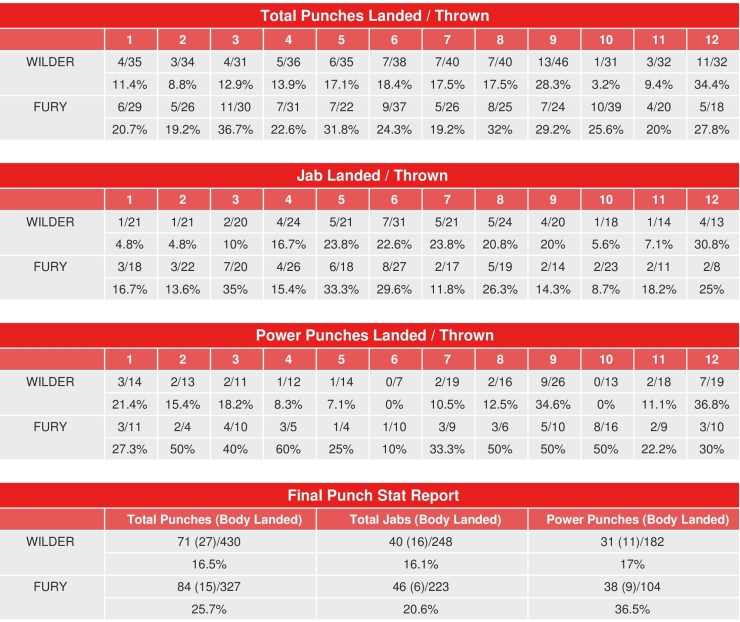 [QUOTE=lfc19titles;19319193]But you know better than all of them right ? You know better than ex boxers ? You team wilder troll[/QUOTE] right on...Teddy Atlas said Fury won too. oh well, we continue to pay for corruption/US boxing:banghead:

end of discussion. I can't stand Fury, but he won that fight easily.

It's always interesting to look at the punch stats after the fight. 2 rounds that I gave to Wilder Fury outlanded him in both jabs & power shots. I scored it 113-113 with the 2 KDs being the difference. Fury…