Deontay Wilder apparently has no plans of coming up for air from his deep, deep rabbit hole of excuses.

In the latest leg of an unexpected PR blitz, Wilder doubled down on all the reasons – each one more fanciful than the next – on why he lost to Tyson fury in their ballyhooed rematch Last February, including the much-lampooned theory that Fury wore doctored gloves in that fight. The proof? According to Wilder, he has fingernail marks inside his ear.

“I haven’t yet heard valid proof of how gloves flap all the way back, why your hands were in the middle of the glove, why did my ear have scratches deep inside my ear? Because of your (Fury’s) nails,” Wilder (42-1-1, 41KOs) told Brian Custer on The Last Stand PodCast. “It’s so many different facts and proof that we have. But it just shows the greatness of it." 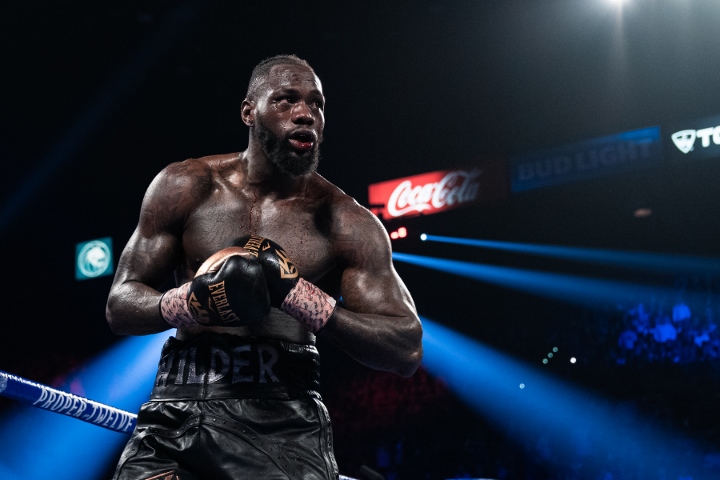 The “Glove Gate” conspiracy theory initially exploded shortly after Wilder-Fury II, when numerous videos went up purporting to show that Fury had manipulated his gloves. Wilder, who had been quiet all summer long, broke his silence nearly two weeks ago in a viral video post on his social media in which he seemed to piggyback on the Glove Gate bunkum.

"I saw in the first fight when Ricky Hatton was pulling down your gloves to put your hand in the improper position," Wilder said in the video. ”Y'all tried the same method the second time, but this time, you scratched flesh out of my ears which caused my ears to bleed.

“It's impossible for a brand new 10 ounce glove to bend, to keep a smushed-in form or to have loose space. I highly believe you put something had in your glove. Something the size and the shape of an egg weight. It's the reason why the side of my face swelled up in an egg weight form and it left a dent in my face as well. But in the midst of it all, you still couldn't keep this king down. You would have had to kill me. In the end, it took a crab in the bucket referee and a disloyal trainer to throw the towel in just to stop me."

Wilder recently fired assistant trainer Mark Breland for stopping the fight in the seventh round, a move he interpreted as a form of betrayal. He has spared few on his team from criticism, including Jay Deas, his head trainer and co-manager, whom he still retains, but his most pointed invectives have been reserved for Fury. Wilder is adamant that Fury (30-0-1, 21KOs) hoodwinked his way to an illegitimate victory, insisting that the British heavyweight has a history of malfeasance.

"He cheated. He flat out cheated,” Wilder told Custer. “That wasn’t the best man. That was a coward. He got a long reputation of being a known cheater. And if you known to be a known cheater, why you gonna stop now? The gist of it, if they have the opportunity to cheat and you don’t cheat, you’re known as a sucker.”

"[Y]ou can go back to the rap sheet and history of him cheating and cheating even going back with the Klitschko fight,” Wilder continued. “So he wasn’t no better man at that fight. It’s so sad that I’m so great in this sport that they had to cheat me. [It’s] what makes me even more powerful, my legacy even stronger than it already is.”

[QUOTE=REDEEMER;20898814]I’m not in the U.K so that’s a fail right there . No media has shown anything except how ignorant Wilder is and people going with this ,what’s your opinion on the fingernail thing now ? How can an egg…

[QUOTE=REDEEMER;20897817]How did Fury get away with taking his gloves off in the ring with everyone watching and handing them over ? You know all this stuff is on video right ? Gypsy magic ?[/QUOTE] Hand the gloves over to the…

[QUOTE=Cool Scant;20898435]fury and Uk media only put out partial video which doesn't mean anything. No2 the commission is obviously incompetent if you can see fury has no padding in the knuckle area of the glove according to the pic from…

[QUOTE=Tom Joad;20897758]Ha ha! Did he really? I didn't even know that![/QUOTE] Yeah when he was on the Joe Rogan podcast he said Fury was able to get up from the knockdown in the first fight because of gypsy magic He…

[QUOTE=REDEEMER;20897817]How did Fury get away with taking his gloves off in the ring with everyone watching and handing them over ? You know all this stuff is on video right ? Gypsy magic ?[/QUOTE] fury and Uk media only put…