Deontay Wilder: Breazeale's Not Next Unless Fury's 'A Coward'

The 6-foot-9 Fury (27-0-1, 19 KOs) rose from ninth- and 12th-round knockdowns -- the latter off a vicious right hand, hybrid left hook-uppercut combination -- as Wilder (40-0-1, 39 KOs) failed to earn his eighth knockout in as many title defenses on December 1 at The Staples Center in Los Angeles.

"When I seen my son get knocked down heavily like he did, I’d have settled for the draw," said John Fury, calling Tyson's resilience "the best effort you’ll see from anybody in any field of sport” during an interview with British Boxing Television. “Deontay Wilder...believed in his power right until the end...I did not believe in his power, but I believe in it now. Believe me, I do."

“I’m the guy who hits the hardest in the division, period. I bring an aggressive style, excitement and devastating knockouts," said Wilder, a 2008 Olympic bronze medalist. "All of my knockout victims have felt it, and Fury even told them after our fight that my power is for real. I come to dominate and knock you out, and I won’t leave the ring until I knock you out." 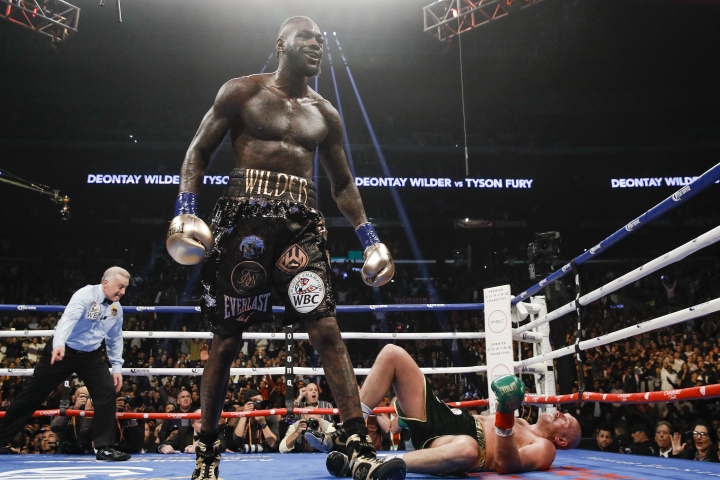 The 6-foot-7 Bronze Bomber craves a rematch with the“Gypsy King," whom he hopes isn't getting cold feet from watching replays of their crowd-pleasing battle and the final-round blow that left him flat on his back, staring at the ceiling and seemingly out cold. Fury reached his feet, however, before referee Jack Reiss counted to 10, in fact, at 9½.

“I don’t know how confident Fury is after watching himself get knocked out, and believe me he was knocked out. He’s probably 50-50 on it: 50 percent of him wants the rematch, and 50 percent of him is thinking about that knockout and don’t want the fight. You’ve gotta be thinking about that knockout, knowing that it can happen again. That’s gotta leave something lingering in the back of his mind that this can happen again," said Wilder, 33, of Tuscaloosa to BoxingScene.com.

"But if he’s a true warrior and the true ‘Gypsy King’ that he claims he is, then all of that doubt will go out of the window, he’ll wanna prove that, no matter what, he was right that he won the fight, and he’ll fight me again. As for myself, I’m a warrior, and if people say it’s a draw, one side being for him, and one side being for me, then let’s run it back and do it again. We can’t leave people indecisive about what went on in what they feel was a controversial ending. Let’s give them a clear view and run it back once again, and I’ll guarantee you I’ll come out on top like I did the first time."

“The Bronze Bomber’s” desired return bout with Fury has received the blessing of WBC President Mauricio Sulaiman. If not Wilder-Fury II, Sulaiman seems to favor a unification between Wilder and IBF/IBO/WBA/WBO champion Anthony Joshua (22-0, 21 KOs), according to a report by Tris Dixon of BoxingScene.com.

“You’ve got the best heavyweight in the world right here in America," said Wilder, who fought previously unbeaten 6-foot-4 Cuban southpaw Luis Ortiz  in March, scoring a three-knockdown 10th-round TKO after being badly wobbled and nearly out on his feet in the seventh round.

"No one has done what I’ve done in 2018, fighting killer after killer in Luis Ortiz and Tyson Fury. I’m coming back in 2019 already trying to do a rematch. That says a lot about me and my character and about me being the king of the heavyweight division. I know I’m the best and I try to show that to people. If you doubt me, I’m gonna to continue showing you, always ending my fights in devastating knockouts."

Wilder chose Fury after failed negotiations to make a fight with the 6-foot-6 Joshua, doing so over his designated mandatory challenger Dominic Breazeale.

A  2012 U.S. Olympian, Breazeale's ninth-round stoppage of Carlos Negron on December 22 at Barclays Center in Brooklyn, New York, represented his third straight KO since losing by seventh-round TKO to Joshua in June 2016.

Wilder was ringside for the 6-foot-7 Breazeale's victory over Negron, holding his 10-month-old daughter, Kaorii. She is Wilder's youngest in a brood seven comprised of three boys and four girls, the eldest being 13-year-old Naieya.

“Breazeale is definitely not going to be next. With all of the excitement from the Fury fight, we can’t leave it as a draw. There’s no such thing and as a draw in my vocabulary, only a winner and a loser," said Wilder.

"The only way me and Breazeale fight is if Tyson Fury wants to be a coward and don’t want the second fight with me. If that happens, then, of course, we’ll fight Breazeale. But as long Fury is down for it, then you know I’m down for it and the Fury fight’s gonna be on. So for now, I’m looking forward to the rematch."

[QUOTE=Bad Bart;19407590]God, the Matchroom fangirls really are the worst thing to happen to boxing. The heavyweight division is about to pop off and there's nowhere to enjoy that fact anywhere because you have these dudes that whack off to Eddie…

[QUOTE=Bad Bart;19407922]Hahahaha! You have no idea how pathetic you sound! Hahahaha!!!![/QUOTE] If you are smiling and not angry my job is done. Would you like me to bring forth some pathetic comments you have said in the past? However, I…

[QUOTE=Bad Bart;19407922]Hahahaha! You have no idea how pathetic you sound! Hahahaha!!!![/QUOTE] If you are smiling and not angry my job is done. Would you like me to bring forth some pathetic comments you have said in the past? However, I…

[QUOTE=Noelanthony;19407846]I never rant I usually just poke fun at some of the crap I hear you saying. I don’t know none of you personally so my opinion is just aimed at that specific comment. I don’t consume my thoughts on…

[QUOTE=Bad Bart;19407733]'You rant every moment'!!!! HAHAHAHAHA!!!! I've rarely chimed in, look at my comment history you ****ing weirdo. It's just that what I've said has obviously struck a chord. I understand considering how emotional you are! HAHAHAHAHA!!! BTW, there's a…