Lebedev knocked out Altunkaya with a straight left at 1:03 of the third. Altunkaya was also down in round two after a left hook to the liver.

The WBA recent ordered their world champion Oleksandr Usyk, to make a mandatory defense against Lebedev.

Three weeks after his 39th birthday, Lebedev reminded everyone that this age matters little when you have a championship caliber punching power and world class skills. Fighting in front ot a partisan Uralic crowd at the Traktor Ice Palace, he proved his worth in the expense of Germany-based Turk Altunkaya. 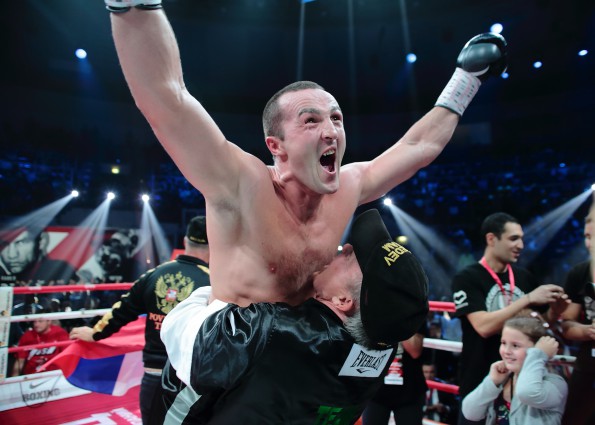 Lebedev, named WBA champion in recess, hasn't been seen in the ring for more than a year. Altunkaya, meanwhile, was just 1-2 in his latest fights, lost inside the distance to both Krzysztof Glowacki and Beibut Shumenov, the last time just two months ago in Astana.

It was been discovered that Lebedev was in another league when compared to WBA #9 Altunkaya, 30, even despite understandable rust after a long lay-off and some wear&tear following a number of hard-scrap battles in his rampaging career. The first round, however, was tedious, Altunkaya utilized his footwork to move well along the ropes, while Lebedev wasn't that successful in cutting off the ring.

Things got better for the Russian in the second round. Altunkaya was winning the jab contest but Lebedev, unrated yet with a history of titles behind his back, began to corner his opponent more smoothly. His punches got meaner, his glances felt dangerous, and he finally put Altunkaya down with a solid left hook to the liver. Altunkaya was dazed but showed toughness surviving until the final bell. The break, however, was too short for the Turk, as he began to get pummelled from the opening bell of round three, Finally, and overhand left to the temple of Altunkaya staggered him and put him down for the count.

Zauer Abdullaev (10-0, 6 KOs) got the biggest win of his young career with a twelve round unanimous decision over world title challenger and tested veteran Hank Lundy (29-7-1, 14 KOs).

Abdullaev was making the first defense of his WBC Silver lightweight belt.

Abdullaev, lankier of the two at 5'9'', was also busier of the two, but Lundy gave him fits with his roll-with-the-punches defense and occasional stinging hooks and uppercuts. Both fighters looked fresh in the opening rounds, and Lundy was a bit busier in rounds four and five. Yet Abdullaev, 24, turned back the tide after a mid-point to trouble Lundy, ten years his senior.

In a battle of journeymen, Russian traveller Alexey Evchenko (17-11, 7 KOs) stopped Bruno Leonardo Ronay (21-6, 18 KOs) of Argentina, forcing his opponent to retire on a cut after six complete rounds.

No less than three vacant minor super featherweight belts were at stake in a fight between Russian lightweight champion Nikita Kuznetsov, 23, and local favorite Mark "Canelo" Urvanov. 22... and they all remained vacant following an unpleasant ten-round draw between the young fighters. Kuznetsov moved to 9-0-2, 4 KOs, while Uravanov is now 13-2-1, 6 KOs. Scores were: 99-91, 95-95, and 94-97. Eurasian Boxing Parliament, IBF Youth and WBC CISBB 130lb titles were at stake.

Twelve years and a number of fights following his last stoppage loss (to Kevin Mitchell), Belarussian veteran Andrey Isaev (30-14, 9 KOs) was stopped again - this time by Ruslan Kamilov (4-0, 3 KOs). The bout was stopped after three complete rounds of action.

[COLOR="Magenta"]Sadly, Denis looked a little fat, had a bad haircut, and just looked old in general. He's an all time great cruiserweight imo. I'd like to think he keeps getting these types of soft fights at this stage of his…

Fat Russian guy beat a journeyman, that should be the title.

Altunkaya is a disgrace...he just came there to lay down...he was hardly hit. Also nice win for Zaur Abdullaev

Please tell me he didn't call out Usyk.