Oscar De La Hoya considers the outcome of the Floyd Mayweather Jr.-Manny Pacquiao fight the consequence of timing more than anything.

De La Hoya believes the Mayweather-Pacquiao result would’ve been “a lot different” had they boxed before finally fighting in May 2015. Mayweather, who was 38 when they fought, out-pointed Pacquiao, then 36, convincingly in their 12-round welterweight fight in Las Vegas.

“Pacquiao would have beaten him easily,” De La Hoya told the Philippine Daily Inquirer after a press conference Thursday for the Pacquiao-Lucas Matthysse fight. “In their prime? Absolutely.” 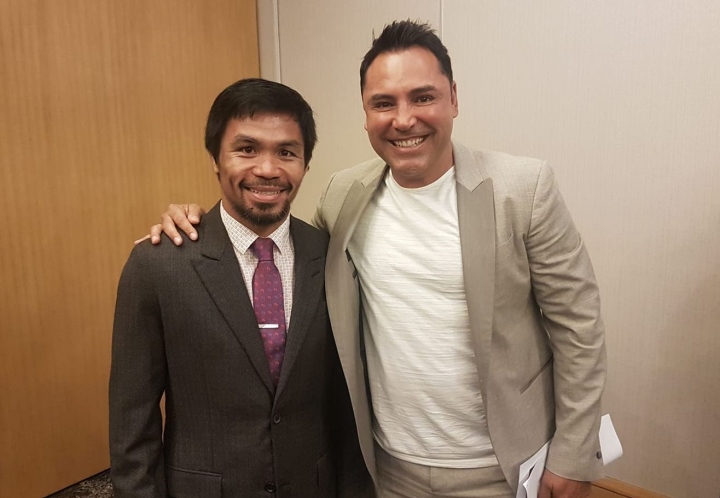 The retired De La Hoya, whose company promotes Matthysse, lost a split decision to Mayweather in May 2007.

“The Golden Boy” retired after Pacquiao surprisingly dominated him in their December 2008 bout. De La Hoya declined to continue after eight one-sided rounds against the Philippines’ Pacquiao.

The 41-year-old Mayweather retired for the third time after stopping UFC superstar Conor McGregor in the 10th round August 26 in Las Vegas. The 39-year-old Pacquiao plans to continue fighting after facing Matthysse on Saturday night.

Mayweather-Pacquiao generated more than $600 million in overall revenue. Their 12-round, 147-pound title fight was met mostly with criticism because it lacked action.

“I’ll tell you the truth – I’ll give Floyd the advantage over Manny any day because Manny has been in wars,” De La Hoya said. “Manny has fought better opposition in their prime. He has more wear and tear. He has had a longer, better career than Floyd and Floyd fights once a year. He takes care of himself. He trains all the time, so Floyd is fresher. He doesn’t fight like Pacquiao. Pacquiao gets hit and keeps coming. That just wears you down. So I have to give Floyd the advantage, as much as I love Pacquiao.”

Argentina’s Lucas Matthysse (39-4, 36 KOs, 1 NC) will defend his WBA world welterweight title against Pacquiao (59-7-2, 38 KOs) at Axiata Arena in Kuala Lumpur, Malaysia. Their championship match, Pacquiao’s first fight in more than a year, will be streamed live by ESPN+ as part of a doubleheader slated to begin at 9 p.m. ET/6 p.m. PT.

Oscar is both correct and butthurt at the same time here. Never forget he gave boxing the blueprint to beating Floyd - which never worked!

Basically the reason why he waited for him to planked and lose to bradley and couldnt be able to KO the algerias of the world anymore the suddenly he has no problem with it not being a flat fee, and…

[QUOTE=WesternChamp;18932001]the pac/cotto fight took floyd's confidence away. never seen him acted that way. he was shooked!! lol.[/QUOTE] And that fight makes the whole mayweather clan so shook, especially his father. lmao.

[QUOTE=travestyny;19785395]Pacquiao's own father said Pacquaio lost :lol1: So did your father, Lomachenko :lol1:[/QUOTE] It's all just your imagination. It was after pac beat cotto that Floyd own father cleary said it on video that he don't want his son to…

[QUOTE=pasawayako;19785231]Floyd himself knew it that's why he ducked pac. Heck floyd own father said that he wouldn't let his son fight a prime pac.[/QUOTE] Pacquiao's own father said Pacquaio lost :lol1: So did your father, Lomachenko :lol1: