When Oscar De La Hoya is asked to wear his prognosticator hat, his prediction for the rematch between Andy Ruiz and Anthony Joshua is given to his fellow Mexican countryman.

“I think we’re going to have the same result,” said De La Hoya, founder of Golden Boy Promotions. “Andy Ruiz probably has his number. Ruiz is going to get better, faster and stronger. I don’t think Anthony Joshua is going to correct anything.” 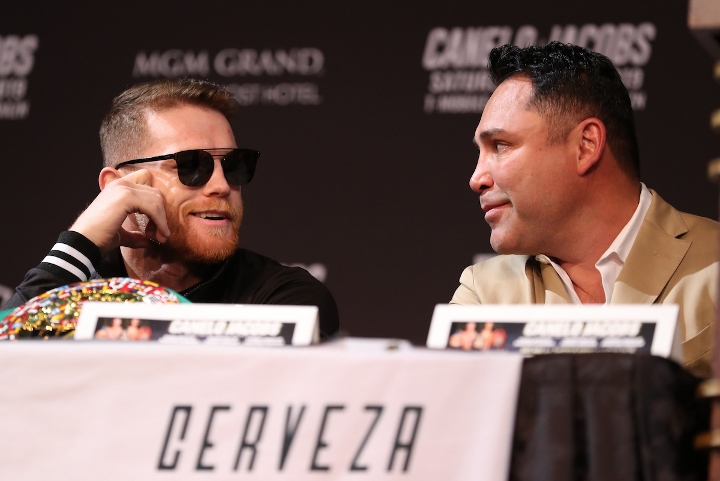 De La Hoya said if he’s ever offered a sizable fee much like Matchroom head Eddie Hearn scored in Saudi Arabia, to stage a fight with Alvarez, or any of his world champions, he’d “absolutely” take the fight there.

Although the Hall of Fame fighter never fought outside of the US in any of his 45 career fights, he knows all about high stakes rematches.

De La Hoya thinks Joshua won’t make the necessary corrections that will be needed to win the fight.

“[Joshua’s] been fighting the same way for all these years,” said De La Hoya. “As a fighter, it doesn’t make me think that he can change things up. But who knows. In boxing, when you’re a heavyweight and have that heavy punch, anything can change. I just think Ruiz has the better chin, and has less distractions than what Joshua has.”

[QUOTE=moochi;20234184]Canelo isn't a global superstar .. he's a Mexican and Mexican American superstar. He's been gifted too many fights and that's part of the reason why the rest of the world don't rate him.[/QUOTE] He's a superstar in Mexico and…

[I]I'd take the filthy lucre![/I] And DLH slips further even further down in my estimation.

I am not sure where people get their numbers from, stating that Joshua is making 70 million. Where are these official purses?

This wouldn't work for Canelo. His core fanbase is in Mexico and the western United States. The fight would bomb on DAZN and would get less ratings on Mexican television. This works out perfectly for AJ because he sells PPV…

Corrupt canelo would be a suitable face for saudi Arabian boxing