De La Hoya: People Will Know Who Vergil Ortiz is After May 4

Shakur Stevenson, the 2016 U.S. Olympic silver medalist, regained the spotlight this month after cruising in his step-up bout against Christopher Diaz. Lopez and Stevenson are signed with Top Rank. 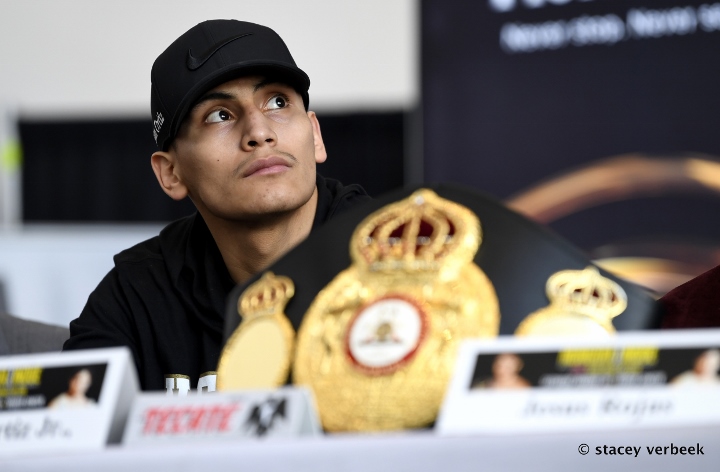 Garcia has made a name for himself, and likely the most recognized from the top prospects with more than 2.5 million followers on Instagram.

Ortiz hasn’t received the same attention as the other up-and-comers, but that’s OK with the undefeated junior welterweight prospect.

“Not at all,” Ortiz said after being asked if he’s bothered by the lack of attention. “I’m not a hater at all. If they get success, I’m happy for them. That’s a big thing for them, I know that I’ll get it later. I’m not in any rush at all.”

Ortiz will get a grand opportunity to build his brand on May 4 when he meets Mauricio Herrera in the co-main event to the Saul “Canelo” Alvarez-Daniel Jacobs undercard.

With Alvarez considered the biggest draw in boxing, plenty of eye balls will be on Ortiz, who has a tough challenge against the veteran Herrera.

Oscar De La Hoya, Ortiz’s promoter, is confident that his fighter will make the most of his exposure on Cinco de Mayo weekend in Las Vegas.

“This is his moment to shine,” De La Hoya said. “We’ve always believed that he has all the talent in the world to win a world title at such a young age. … This is going to be a strong test for Vergil Ortiz. Mark my words, after May 4 after the fight, people will know who Vergil Ortiz is.”

[QUOTE=RingGuru;19700456]Vergil definitely has the goods, but problem is who is GBP going to put him against in the future? All the talent in that division is with PBC[/QUOTE] Pbc has no champions in that weight class

Vergil definitely has the goods, but problem is who is GBP going to put him against in the future? All the talent in that division is with PBC

[QUOTE=T.M.T;19700090]racist little girl I'll leave that to you. What's worse is you're dick sucking a hype job.[/QUOTE] Your momma is a hype job punk! I gave that biitch a chance to prove herself and I put that hoe on Sunset…

[QUOTE=BigStomps;19699874]Vergil is a hype job??? You hating ass punk! I'm sure if he was black and signed to Al Haymon then you'd be sucking his dick like you do all the black fighters.....[/QUOTE]racist little girl I'll leave that to you.…

I like the kid Vergil Ortiz. He deserves the push over what they're trying to do with Ryan Garcia.