Jaime Munguia will be fighting Saturday on a date that’s been entirely reserved for Canelo Alvarez ever since Alvarez first became a stateside sensation.

Since 2010, Alvarez has fought seven times on Mexican Independence Day Weekend. But this year, Golden Boy failed to secure a summer deal in time for Alvarez to continue his September tradition and follow up the Cinco De Mayo beating he put on Daniel Jacobs.

Oscar De La Hoya, who promotes both Alvarez and Munguia, said the latter fighter was the next best option in his bullpen to represent Mexico on the special holiday.

“Jaime stepped up to the plate. He knows how important boxing is on that date, right next to Cinco de Mayo,” De La Hoya told BoxingScene.com. “He has to give a great show, and go out there guns blazing, because that’s what people expect. They expect a knockout and a great fight, especially on that date. Jaime was the next best option after Canelo to represent that weekend.” 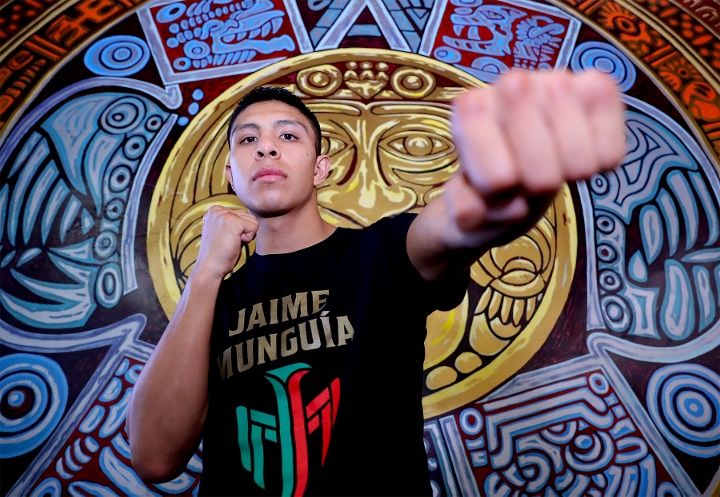 Munguia (33-0, 26 KOs), the 154-pound WBO champion, echoed much of the same sentiment during his media workout Wednesday at the Azteca Boxing Club in Los Angeles ahead of his fight against Patrick Allotey (40-3, 30 KOs). The fight will take place at the Dignity Health Sports Park in Carson, Calif. and will be streamed live on DAZN and compete with Top Rank’s car headlined by Tyson Fury and Otto Wallin on ESPN+.

"It's very important to me that I'm headlining on this special day. It's a big responsibility but it's very exciting and I promise to do a good job for all my fans,” said Munguia. “My new trainer, Erick Morales, gets more out of me. I'm training harder and running harder. I'm going to give the best and I hope I can deliver the best to the fans.”

De La Hoya picked up the torch of fighting on the two Mexican holidays from his predecessor Julio Cesar Chavez, an adversary he twice beat, and he’s hoping Munguia can capitalize on his newfound opportunity for more palatable chances in down the line.

“I looked forward to fighting on both holidays. It meant that I was going to fight in a major event, and I was proud to represent my heritage on both of those dates,” said De La Hoya. “Mexico loves Jaime. It’s a matter of who he fights,”

De La Hoya is hoping that Munguia puts on a strong showing so that he can take the stage with the sport’s biggest draw sometime in the near future.

“If he fights Canelo within two years and wins, that might be the passing of the torch. There are different variables that come into play. It’s just a matter of timing. He has to pass the test on Saturday first.”

“Life is about opportunities. If they give me the Canelo fight for the next one, I will take it anytime,” Beltran told BoxingScene.com. “If they wait one year, even better for us. It will be a competitive fight. I believe in my fighter.”

Munguia, who’ll be moving up to 160 after the fight, hopes to put on a definitive performance Saturday following a shaky majority decision win against Dennis Hogan in April so that he can get the Canelo conversations cracking.

“As a Mexican, I'm representing my country and it's a huge responsibility but I'm happy to be taking it on,” said Munguia. “Patrick Allotey is coming ready to fight me and of course, I want to win by knockout. I felt really good during training camp and I hope to give a spectacular show."

I like mungia but don't think he has a shot at beating canelo, Morales has a better chance at beating him

This fight is a disgrace. Allotey isn't a top 100 fighter. Most of his opponents had losing records. This is a bigger mismatch than Lara vs. Ramon Alvarez.

Yeah but this Card is complete SH#T Oscar...Respectfully! Only fight I look forward to tonight is Pedraza vs Zepeda honestly and that is on Tyson Fury Card

Wrong. Terremoto Santa Cruz VS G. Davis would have been 10x better than that crap had Davis not run up to 135 with his tail between his legs to chase a Gamboa fight.