De La Hoya: Matthysse Fight May Be The End of Pacquiao

They will battle for Matthysse's "regular" welterweight championship of the World Boxing Association.

De La Hoya, who promotes Matthysse, confirmed that the fight could be broadcast on ESPN, and ruled out any mishap with the promotion. 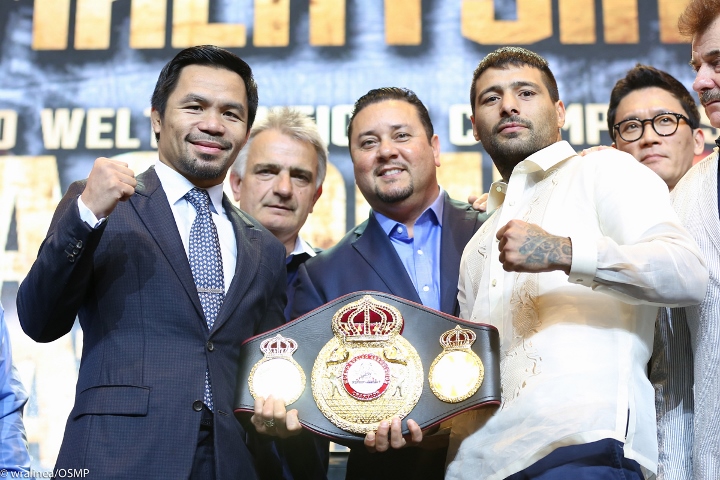 De La Hoya plans to travel over to support the promotion of the event on July 10.

Pacquiao, who ended De La Hoya's career in 2008, is now close to the end of his own. He was last seen in the ring back in July 2017, when he lost an upset twelve round unanimous decision to Jeff Horn in Brisbane, Australia.

"For me, every legend has his end and I think that this fight with Matthysse may be the end of Pacquiao," De La Hoya said to ESPN Deportes.

De La Hoya also made it clear that there are no issues with the event.

Rumors continue to circulate that Pacquiao-Matthysse will not come off as planned.

And Pacquiao's longtime promoter, Bob Arum of Top Rank, has made several comments regarding the possibility of the event falling out and matching Matthysse against Terence Crawford. Arum is not involved with the card, which Pacquiao is promoting through his own company.

"I'm going to Malaysia on July 10 to be with Matthysse and Pacquiao, that fight is going to happen without any problem," said De La Hoya.

"Matthysse is going to fight Pacquiao period, there is no other option. I don't know why Bob Arum is saying [the event could fall out], I don't know if he just doesn't have confidence in the work that Pacquiao is doing in Malaysia or maybe he thinks that Pacquiao is not going to carry it out because he does not have things in order, but the truth is that I know [the event will happen]."

[QUOTE=KidDinamita;18913586]For sure he can afford them, first with stilettos and fishnets then playing with cutlery isnt so nice.[/QUOTE] Now he wants to become Jaime Munguia's promoter. That kid must be VERY careful. :spank:

[QUOTE=Tatabanya;18913486]As a so-called ATG and being a wealthy man, he can afford these precious utensils. Someone less gifted would have to content himself with Japanese rice sticks.[/QUOTE] For sure he can afford them, first with stilettos and fishnets then playing…

[QUOTE=KidDinamita;18913421][IMG]https://newbridgesilverware.com/images/rose-mobile.jpg[/IMG][/QUOTE] As a so-called ATG and being a wealthy man, he can afford these precious utensils. Someone less gifted would have to content himself with Japanese rice sticks.

[QUOTE=Tatabanya;18904525]You would love to, huh, Oscar? You still have flashbacks of that night in which Pacquiao kicked the shìt out of you to send you back to fishnets and stilettos once and for all, right?[/QUOTE] [IMG]https://newbridgesilverware.com/images/rose-mobile.jpg[/IMG]

[QUOTE=McNulty;18912672]Your arguments are 90% unreasonable and you're just repeating the old scribes. Step your game up man and stop using reverse euhemerization on fighters like Hagler. Think for YOURSELF and stop listening to them telling you what to think.[/QUOTE] That's…