Welterweight contender Vergil Ortiz Jr., the explosive 2019 prospect of the year, has been moving up the ladder at quick pace and his promoter, Golden Boy CEO Oscar De La Hoya, believes he is ready to face the best the division has to offer.

“He has such big potential. We’re super excited about Vergil Ortiz. He’s so talented he can beat any welterweight out there right now,” De La Hoya told BoxingScene. “Any (Premier Boxing Champions) fighter, we would love to make the fight.

“The only guy that I would think twice about would be (world titlist) Terence Crawford, but still it’s a fight that I would love to make now. I would put him in with Crawford next. We would most definitely do Crawford versus Vergil.”

De La Hoya said it would be no issue on their end to do the fight with Crawford promoter Top Rank.

“I think working with (Top Rank chairman) Bob (Arum) has always been a pleasure so I am sure it would be no problem,” said De La Hoya, who was promoted by Arum for most of his career and despite massive issues with each other as rival promoters in years past they work well together now. 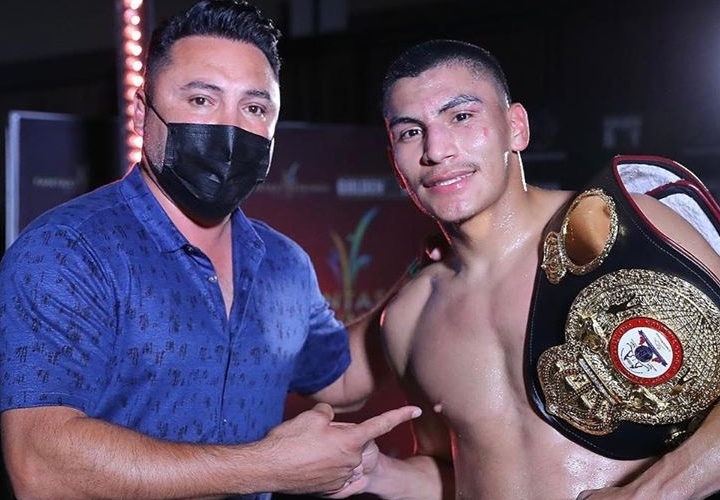 Ortiz (16-0, 16 KOs), 22, of Grand Prairie, Texas, has dominated throughout his career since going pro in 2016 and has stepped up his opposition since moving up to welterweight in 2019. In the 147-pound division Ortiz has knocked out former junior welterweight title challengers Mauricio Herrera and Antonio

Orozco as well as Brad Solomon and Samuel Vargas. Herrera, Orozco and Solomon had never been previously knocked out.

Ortiz is coming off a seventh-round knockout of Vargas on July 24 in Golden Boy’s first show since it was able to begin putting on cards again during the pandemic.

De La Hoya said Ortiz, who is trained by Robert Garcia, will be back in action in the first quarter of 2021, either February or March.

Ortiz believes he is also and loves the idea of challenging Crawford for his world title.

The 33-year-old Crawford (37-0, 28 KOs), who has won titles in three weight classes, holds the WBO welterweight title and made four defenses. Ortiz is No. 2 in the sanctioning body’s rankings, meaning a mandatory position is not far off.

“So, maybe I get a mandatory on that or something,” Ortiz said. “I’m not gonna turn that down. I’m not a fighter that will turn down a belt opportunity for money. Winning a belt is going to give me opportunities so I want to fight for the belt. Hopefully, I can force a mandatory or something like that.”

Ortiz said he was honored by De La Hoya’s comments about his willingness to match him with a fighter of the caliber of Crawford, who is universally viewed as one of boxing’s best pound-for-pound fighters.

“That makes me feel great. I’m grateful that I have the confidence of my promoter behind me and I feel like I can do it too. I agree,” Ortiz said. “We can make the fight next. I’ll happily take it. Definitely.”

Crawford has been unable to land a fight against one of the division’s top names because they are all with PBC – unified world titlist Errol Spence Jr., titleholder Manny Pacquiao and former titleholders Danny Garcia, Shawn Porter and Keith Thurman. The lack of a major fight for Crawford has led to serious issues between him and Top Rank’s Arum, who was so upset over problems related to Crawford’s fourth-round knockout of former world titlist Kell Brook on Nov. 14 that he told BoxingScene he has turned over all matters related to Crawford fights to Todd duBoef, the Top Rank president and Arum’s stepson.

While it’s far too early to begin working on Crawford’s next fight, duBoef said Top Rank would be open to making a match between Crawford and Ortiz.

“We will look always look for the biggest matches for Crawford,” he told BoxingScene. “We have always said we will fight anyone.”

Golden Boy has a contract for its fights to appear on streaming service DAZN and Top Rank has a deal with ESPN. But the companies have made deals for their fighters to fight on the other platform here and there. De La Hoya said the broadcaster would not be an issue if Crawford was interested in facing Ortiz.

“(The broadcaster) would depend obviously because the fighter wants to see the money, but I think it’s a fight that could easily be made,” De La Hoya said.
Ortiz said he watched Crawford’s fight with Brook closely.

“Brook was doing good in the first two, three rounds. He was using his jab pretty good,” Ortiz said. “Crawford had a little tough time but then he capitalized on Kell Brook’s mistake. (Brook) didn’t throw his jab all the way out. He just showed that he was coming in and he paid the price for it.

“I couldn’t tell you exactly how (a fight with Crawford) would go down but I feel like I have a size advantage. I have a good jab. I’m smart in the ring. That’s probably the most important part right there.”

[QUOTE=NachoMan;20921081]Thanks, Face. We probably agree on a bit more than we imagine. I also doubt that TC takes this fight. Not because he is afraid of any young lion, but because its a somewhat lower money, lose-lose proposition. If he…

[QUOTE=theface07;20919619]As much as I hate to admit it, I agree with you. People are still calling the kid a prospect because of his age and the limited amount of time he's been a pro but the advances he's made and…

[QUOTE=Bronx2245;20919948]I wouldn't go there now either! Rashidi is really the best (if no Thurman, Ugas, or Pacquiao) option! Both GBP! Ellis is a Top 10 WW! I don't understand why GBP is hesitant in making that happen?[/QUOTE] You know boxing

[QUOTE=Bandman;20919880]so you're just fishing for any excuse to not give him credit then.. got it lol. Ortiz is green and would get flatlined by Crawford. Oscar might be a cokehead but he aint stupid.[/QUOTE] What excuse? Wanting a guy to…