Vasyl Lomachenko says he needed to take the Jorge Linares fight in order to go down in the history books.

The 30-year-old double Olympic gold medalist will be looking to become a three-weight world champion when he moves up to 135-pounds this Saturday to take on the reigning WBA and Ring Magazine lightweight world champion, live and exclusive on BoxNation.

Ukrainian ace Lomachenko has already proved he is not scared to take on the biggest challenges having fought for a world title in only his second bout as professional. 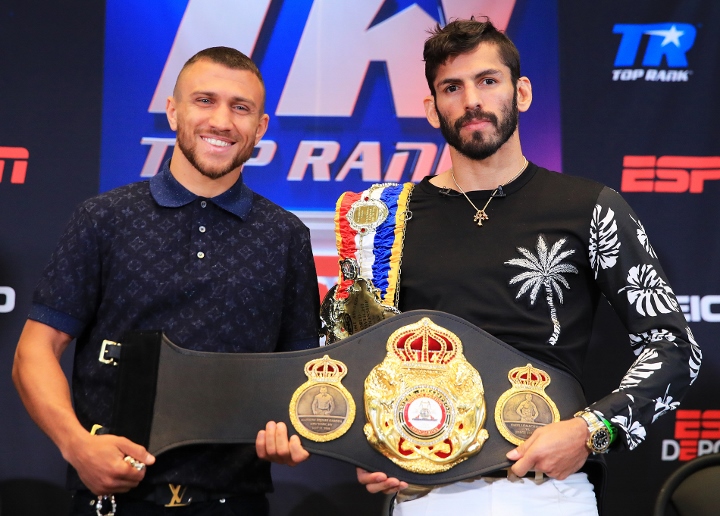 11 fights in and he is looking to continue with that mindset against Linares where he hopes to help write a chapter of his career that will cement a legacy that will last through the ages.

“Linares is one of the best fighters in his weight class. I don’t think it’s going to be easy work. I already proved where I am, and I plan on being at the top of the sport for a very long time. I do not plan on slowing down,” he said.

A legend in his own right Oscar De La Hoya, whose Golden Boy Promotions represents Linares, is well aware that Lomachenko is one of the very best fighters around but believes that the Venezuelan’s bigger size and skill will be too much for him on the night.

“Jorge has established himself as the world’s best lightweight by taking on any and all comers over his storied career, but a win on Saturday night would put him on an entirely different level,” said De La Hoya.

“We fully understand that Lomachenko is universally seen as the best fighter on the planet, but he’s never faced anyone with the size and skill of Jorge, and I am confident that he will retain his WBA and Ring Magazine world championships,” he said.

Because you lie that’s why and I exposed you and your lies. If you were man enough to state you were wrong (which you’ve never done) then I wouldn’t feel compelled to s hit on you and the other POS.…

now we know why he was so confident. those scorecards smh...

[QUOTE=Shadoww 702;18767058][B][I]You and the word [U]honest[/U][/I][/B] [B][I]won’t ever go together EVER pendejo! You bet on Linares and lost again just admit it! Or just admit that you know Lomachenko is the better fighter just like you stated GGG was the…

[B][I]You and the word [U]honest[/U][/I][/B] [B][I]won’t ever go together EVER pendejo! You bet on Linares and lost again just admit it! Or just admit that you know Lomachenko is the better fighter just like you stated GGG was the better…