There has been a lot of reports of the fight between Manny Pacquiao and Lucas Matthysse, scheduled for July 14th in Malaysia, not taking place as there are some financial issues plaguing that event.

Golden Boy Promotions and Matthysse had been waiting on some money due to them the past few weeks.

But the founder of Golden Boy, Oscar De La Hoya, reached out to BoxingScene.com on Monday morning to say - "I read comments on Bob Arum taking about Lucas Matthysse, look. We have a fight with Pacquiao coming up within three weeks. He's looking strong, he's looking great, looking forward to it and fight is full steam ahead." 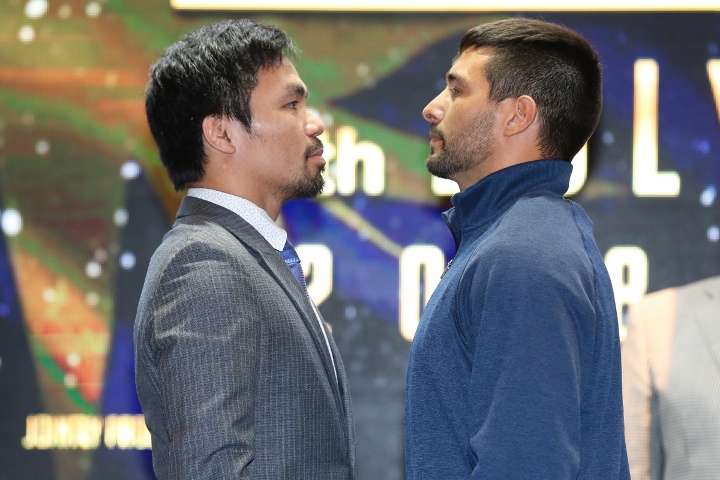 Pacquiao and his handlers have been denying any and all reports of the fight being in jeopardy.

De La Hoya made it clear: "We have a fight."

Arum had been openly talking about Matthysse perhaps facing WBO welterweight titlist, Terence Crawford if this upcoming fight was cancelled.

"I fee very, very confident the fight is going to happen, let's put it that way," was De La Hoya's answer when asked if he was given assurances that they would receive the money due to them.

"I can't give you specific details of our deal but I feel very, very confident it's going to happen."

Matthysse, who holds a version of the WBA welterweight title after stopping Tewa Kiram in eight rounds on January 27th, has been training with Joel Diaz in Indio, California the past couple of months and is set to depart to Malaysia soon.

"I might be there for about ten days, I want to go out there and help Manny promote and do my rounds in Malaysia. I have my plane tickets already. So we're set to go, we have a fight," De La Hoya insisted.

[QUOTE=Aaronpryorz;18891215]Stfu, u used to worship Arum when pac n floyed had beef. Floyd been telling pac to leave Arum, but u sided with Arum. Now u on the same page with Floyd huh?[/QUOTE] You don’t know what you’re talking about,…

If the Malaysian promoter can't produce the money, they better do it in the Philippines where Manny can get lots of sponsors. There is still time.

We're going to Malaysia to watch the world cup of boxing! Vamos Amor!

[QUOTE=Bluebird;18891034]Pac doesn’t need Arum, he organized this fight against Arum’s will. He could always get financiers from countries like Japan, China and Singapore to finance his next fight. Arum could start manipulating somebody else, Pac’s done with him.[/QUOTE] Floyd has…

[QUOTE=Bluebird;18890776]Pac used to be his biggest cash cow, but now, Pac is promoting his own fight. Arum has been demoted to a fight distributor in the USA. Now he’s pissed off because he can’t control Pac anymore. I hope Crawford…