As Oscar De La Hoya, who has not fought since 2008, continues training and planning to come out of retirement there has been much discussion about who might serve as the Golden Boy’s comeback opponent.

Some have suggested former middleweight world champion Sergio Martinez, who won his Aug. 21 return to the ring by seventh-round knockout after six years in retirement, would be a logical foe.

The representative for former welterweight and junior welterweight world titlist Marcos Maidana, who has been retired for six years but is eyeing a comeback, has discussed the possible fight with Eric Gomez, the president of De La Hoya’s Golden Boy Promotions. 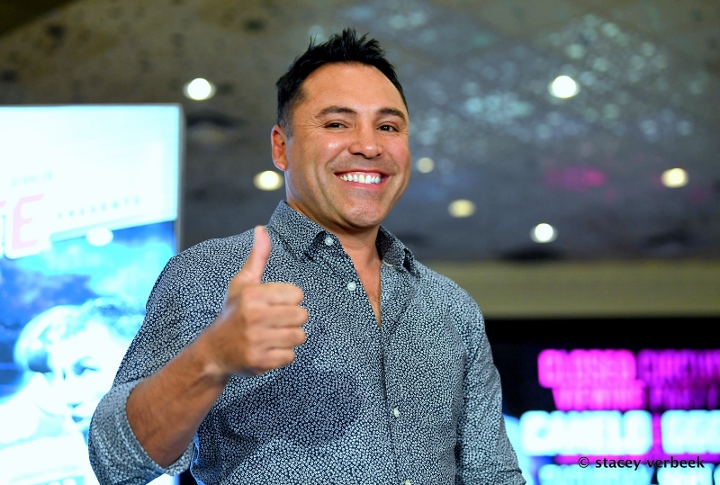 And after reading about De La Hoya’s planned ring return, former welterweight world titlist and Ghana native Ike Quartey (37-4-1, 32 KOs), 50, who lost a disputed split decision to him in a world title fight that headlined a major pay-per-view card in 1999, said he was very interested in ending his 14-year retirement if he could get a rematch.

But De La Hoya, the International Boxing Hall of Famer, who won 10 world titles in six weight divisions, has steadfastly said that should his return come to fruition he wants to face a current top opponent.

Top of his mind is middleweight world titlist Gennadiy Golovkin (40-1-1, 35 KOs). You read that right: De La Hoya wants a piece of GGG and thinks it would be an easy fight to boot.

“You know how easy GGG would be for me? Oh, my gosh,” De La Hoya told BoxingScene.com. “It would be a high-profile fight, that’s for sure.”

When reminded that he was 47 and had not boxed for 12 years – since being beaten up for eight rounds by Manny Pacquiao – and that Golovkin was nine years younger than De La Hoya and still an elite fighter, De La Hoya quickly responded: “He’s older as well.”

When reminded that GGG’s punching power is legendary, De La Hoya’s response was, “I always took a good shot and I always took apart fighters like him. In my mind it would be that easy. I would definitely consider it, that’s for sure.”

Whether De La Hoya actually does return or not is not 100 percent just yet. He said if he does he would ideally like to fight in the first quarter of 2021 and probably at middleweight.

De La Hoya said he was aware of Quartey’s comments and admitted that they did pique his curiosity.

“I heard. I wasn’t really interested but it definitely got my attention,” De La Hoya said.

As part of his decision-making process about whether he truly will commit to a ring return, De La Hoya said he would be paying close attention to the eight-round heavyweight exhibition bout between legends Mike Tyson and Roy Jones Jr., who are both over 50 and coming out of retirement to meet in a pay-per-view headliner on Saturday night at Staples Center in Los Angeles.

‘I’ve already bought the pay-per-view for Tyson-Jones. I’m the first one to turn on my TV and I’m excited to watch and see how Tyson feels and how he looks because that’s going to be a huge determining factor (in if I come back),” De La Hoya said. “But it’s not going to be the only factor in the decision that I make.”

When asked what the Tyson-Jones exhibition had to do with his own comeback, for what he hopes is a real fight and not an exhibition, De La Hoya said, “Because Tyson has been working out now for quite awhile. We had similar careers, similar paths. We’ve had the fast life outside the ring. I want to see how he looks. If his body breaks down in one round and Jones beats him or knocks him out then I have to think twice about doing what I’m going to do. I’m 90 percent that I will come back.”

Should De La Hoya’s return happen it remains to be seen on what broadcast platform he would fight. His Golden Boy Promotions has a lucrative output deal with streaming service DAZN, but De La Hoya the boxer has no contractual ties to any broadcaster.

More seriously, De La Hoya (39-6 30 KOs), the pay-per-view king of his era, said: “It’s obviously an open market for me and it’s a whole different negotiation for me. But whatever works best for me, whether it’s ESPN or DAZN.”

A De La Hoya comeback on DAZN would surely drive subscriptions, which is what DAZN is aiming for. If De La Hoya boxed on an ESPN platform he would have to go through his former longtime promoter Bob Arum of Top Rank, which has exclusive rights to boxing on all ESPN platforms.

Oscar vs Floyd 2? Why not? It makes more money than GGG. Maybe Oscar knows Floyd won't do it? Why woudn't Floyd do it? He's looking to fight novices, Japanese bantamweights, why not a 50 year old former crossdresser?

Oscar knows GGG can be bought. Oscar bought GGG to play soft with Canelo twice. Oscar knows GGG is just a money hunter now. Why won't Oscar dare challenge Canelo? We saw Canelo and GGG are about the same level.…

[QUOTE=Cool Scant;20911086]DAZN gonna make Oscar take a GGg beat down since he was unable to get Canelo to fight GGG a third time[/QUOTE] After the beating GGG will give him, Canelo will feel so bad that he will rejoin Golden…