De La Hoya: Canelo vs. Munguia is Possible in The Future

This past Saturday night, Munguia badly struggled to win a twelve round majority decision over Dennis Hogan to retain the WBO junior middleweight title.

There were many at ringside that saw Munguia losing the fight by as many as three rounds, and the Mexican boxer admittedly told reporters that he believed the contest would end up as a draw. One judge had it a draw at 114-114, and two others sided with Munguia with scores of 115-113 and 115-112. 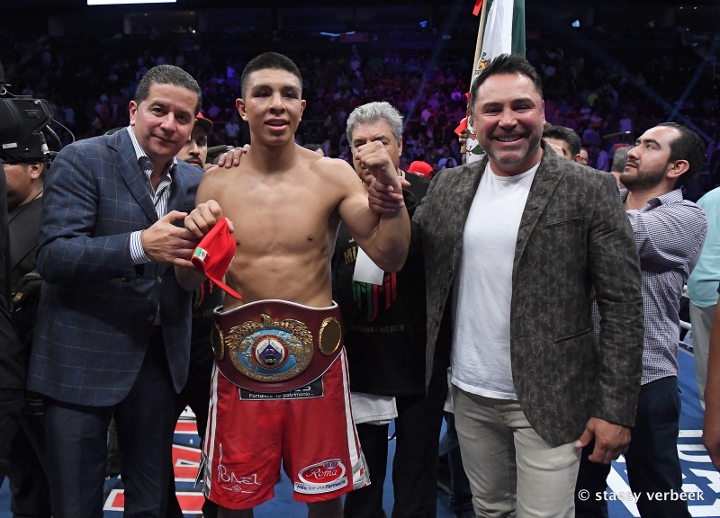 Munguia also stated that he was tired during the contest, possibly from the strain of getting down in weight to 154-pounds.

The Mexican banger, according to his team, was going to make another defense before a move up in weight to 160-pounds.

Based on his recent performance, a move to 160 could be coming sooner than later.

Canelo is back in the ring on May 4th, in an IBF, WBC, WBA middleweight unification against Daniel Jacobs.

De La Hoya cautions that Munguia would likely have to secure a world title, at middleweight, to secure Canelo.

According to the WBO rules, if Munguia moves up - as the 154 champion he would become the mandatory to the WBO's middleweight champion, who at the moment is Demetrius Andrade.

"If they are at the same weight, at 160 pounds, and if Munguía is crowned champion in that division, then there is no reason on why that fight can not take place. We'll see what happens, because Canelo is at the level where he wants to fight with world champions."

[QUOTE=budfr;19661498]Juding by your nickname you are a psycho, borderline retarded. Men lovers like you like to talk about men´s faces, let´s see are you black? white? in either case I can name you many from your race that are ugly.…

maybe as a tune up fight, nothing else...

[QUOTE=PsychoPat;19659940]Of course it is you slippery bastard, let me guess it'll be billed as the face of boxing against the future of boxing right? When in reality its a fight between a highly skilled boxer puncher vs a slower then…

Fishnets Delahoya will cash out his hype job Munguia.

Munguia will Never be a threat to Canelo.