Floyd Mayweather needn’t do business with DAZN for the sports media platform to celebrate his in-ring greatness.

The over-the-top (OTT) media service will ring in Mayweather’s 43rd birthday on Monday with a schedule block streaming some of the greatest fights of his storied career. ET, DAZN will run eight fights back-to-back, beginning with Mayweather’s 4th round knockout of Victor Ortiz to reclaim his old welterweight title. The September 2011 bout will air at 1:00pm ET, the first of eight of his greatest hits ranging from 2007-2014, all of which originally aired live on Pay-Per-View. 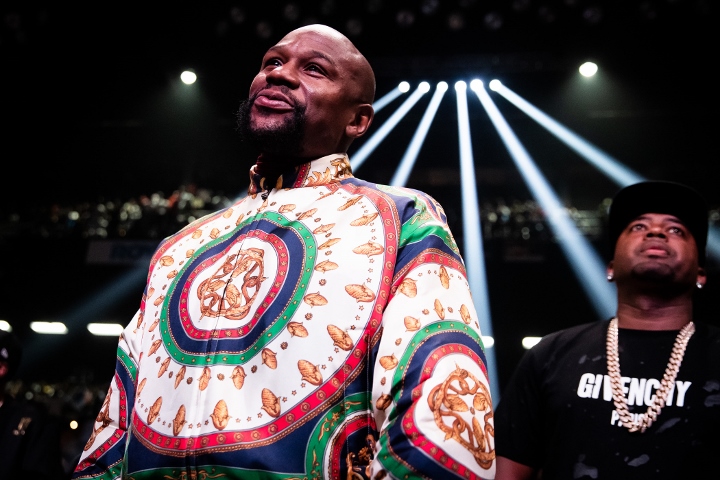 Interestingly, the final fight of the night will feature the sport’s current biggest draw, Saul ‘Canelo’ Alvarez (53-1-2, 36KOs) in the lone loss of his career. That moment, of course, came at the hands of Mayweather whom outboxed the Mexican superstar over 12 rounds. Their September 2013 Showtime PPV headliner—which aired live from MGM Grand in Las Vegas—established financial benchmarks at the time as the highest grossing PPV event and live gave in boxing history.

Mayweather himself has since trampled those marks, both of which were achieved in his May 2015 win over Manny Pacquiao. That bout is not on the viewing block, nor is his last-ever fight when he stopped UFC superstar and boxing newcomer Conor McGregor in the 10th round of their August 2017 clash to advance to 50-0 to end his career.

The bouts which will be shown are as follows:

The final seven fights of Mayweather’s career all carried Showtime branding—with his aforementioned win over Pacquiao serving as a joint venture between Showtime and HBO—and with the premium cable outlet serving as the current home for his promotional stable.

Still, that has not deterred the DAZN brass from celebrating his career—and birthday—in efforts to flaunt its vast archive. The streaming service offers archived footage for the careers of Mayweather, Oscar de la Hoya, Manny Pacquiao, Bernard Hopkins and ‘Sugar’ Shane Mosely, along with current platform stars like Alvarez, Anthony Joshua and Gennadiy ‘GGG’ Golovkin.

This week’s offerings will also tap into Saturday’s headliner from The Ford Center at The Star in Frisco, Texas, pitting Mikey Garcia (39-1, 30KOs) and Jessie Vargas (29-2-2, 10KOs) in a battle of former multi-divisional titlists.

DAZN will present past fights featuring Vargas, who headlined the first-ever DAZN-USA card in October 2018. Footage of past fights featuring Garcia will be available via highlight ahead of a show whose theme ‘Everyone is suddenly doubting Mikey Garcia. Except himself’ speaks to the former four-division titlist’s self-belief of becoming a five-division champ.

Before that journey begins, DAZN rewinds to celebrate the boxing life of a man whose own self-belief far exceeded industry-wide doubt that he could go on to become the sport’s most lucrative star in history. as well as one of the very best to ever lace ‘em up.

This could be valuable streaming data. Who's fights gets the most re-watched streaming hits. Fighters should still get paid for this.

[QUOTE=djtmal;20416652]they saving manny for an exclusive on why was Floyd so scared to fight him in 2010...then they have exclusive footage of Margarito and Khan stalking him...[/QUOTE] Manny ducked the test :rofl: margacheato & princess khan?? :rofl:

[QUOTE=The Big Dunn;20416264]Maybe Floyd and DAZN got something in the works.[/QUOTE] They're just using fights from Golden Boy's library.

Do they think that will get them more subscibers?