David Price Smiles: Anthony Joshua Was Given The Easier Fight!

Molina (25-3, 19 KOs) and Price (21-3, 18 KOs) were the two frontrunners for Joshua (17-0, 17KOs) when former division ruler Wladimir Klitschko suffered a calf injury and withdrew from the idea of fighting next month.

Price is not expecting Molina to come in there as a serious test - and believes the Texan was selected as the "safer" option. 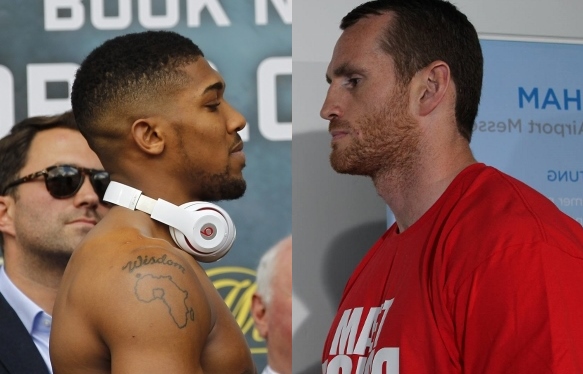 Molina has been out of the ring since knocking out former two division world champion Tomasz Adamek earlier this year. Last year he challenged WBC champion Deontay Wilder and had the champion in serious trouble before he was knocked out a few rounds later.

"They've taken the safer option without a doubt," Price said to Nick Parkinson. "I always thought that Joshua's team -- not Joshua himself -- think that Molina is a safer bet. It's less likely that something will go wrong.

"My selling point is the excitement I would bring. But Joshua's people began to realise there's a serious chance of him getting knocked out if he fought me. I thought I was going to get it at one point but, the longer it's gone on, the less likely it has become that I would get it. There's not going to be many champions picking me out as a voluntary defence and I think it's boiled down to his trainer [Tony Sims], and I can't blame him. Molina was the safer option.

"But the thing with Eric Molina is that I don't think he's going to come to win at all and that's the difference -- I would have come to win. Molina has fought for a world title and even in his best win against Tomasz Adamek he was very defensive, and almost journeyman like. He doesn't take many chances. If he sits on the ropes this fight will be over in a couple of rounds. If he fiddles about for a bit, it might go five rounds.

"It won't bring the same anticipation or excitement as fighting me would. A fight between me and Joshua wouldn't have gone the distance and it would have been a war while it lasted."

Omg you have no clue......yes u r right he is a champion and if you know anything about boxing you will know he was called out by Charles Martin so AJ snapped up the chance just like anyone would so…

Why was this article written ? Does this site have a new comics section ?! David Price is only a threat to himself b/c he keeps deciding to get back into the ring...lol. This clown needs to have a cat…

[QUOTE=Elotero;17163900]:rofl: Only movie I ever slept through in a theatre[/QUOTE] Only movie I remember doing that in was Stephen kings thinner and awoke half way to the end and the movie projected melted??? Speaking of king I was once invited…

[QUOTE=BigZ44;17163684]Lol, all Nic Cage movies are ****e! Except for National Treasure, only because Diane Kruger is in it[/QUOTE] Leaving Las Vegas and Bad Luetenant are tops. One he self destructs on a alcohol binge with a prostitute who took it…