There shouldn’t be any good reason for a fringe heavyweight contender and a career opponent to have to fix a fight in which the outcome went exactly as expected.

At least, that’s what David Allen and Dorian Darch hope will come from a probe into their recent ring adventure together.

BoxingScene.com has learned that an investigation is being contended by the United Kingdom’s Gambling Commission, over concerns of heavy betting action surrounding the aforementioned heavyweight clash. England’s Allen scored a two-knockdown, 3rd round stoppage of Wales’ Darch in a February 8 bout, which aired live on Sky Sports in the UK and on DAZN in the United States in supporting capacity to the ring return of Kell Brook in his hometown of Sheffield, England. 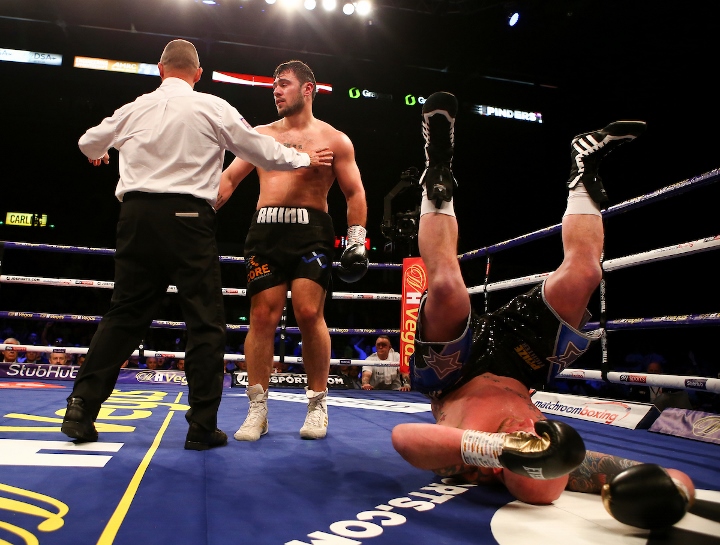 "In briefing, we don't comment on ongoing investigations or confirm they exist because doing so could harm any investigation or could unjustifiably damage reputations," Steph Barr, communications executive for Gambling Commission informed BoxingScene.com of the company's general practice while not speaking to this specific allegation. "We may comment on a case after its conclusion but many cases are led by other bodies including sports governing bodies or law enforcement agencies."

The development was first reported by The Sun in the U.K., whose report references betting service SkyBet as having noticed a significant increase in betting activity on the very outcome produced that night. Chatter—and for the moment is all that has officially come of any such allegations—of a potentially pre-determined outcome surfaced as the action unfolded on Saturday.

Allen spent most of the first two rounds of the scheduled six-round affair flicking his jab and potshotting, never really sitting down on any of his punches while Darch—who had been knocked out 9 times among his 11 prior defeats heading in—did his best to keep pace, though often missing the mark. Allen’s decision to box cute didn’t sit well with his corner, who urged the ‘Doncaster de la Hoya’ (among his many other nicknames, all of which were expertly rattled off by renowned ring announcer David Diamante) to pick up the pace in round three.

The advice was heeded in a big way, with Allen charging like ‘The White Rhino’ he also claims to be, which resulted in Darch (12-12-1, 1KO) twice hitting the deck. The latter of the two knockdowns saw the 35-year old Welshman fall flat on his back, them sit up in an effort to rise to his feet. It didn’t quite take, as Darch shook his head before laying back down on the canvas as referee John Latham counted him out.

From there came cries of something afoul—which were immediately countered and dismissed as rubbish.

“Fix? [I]f so I want a bigger cut,” Darch quipped on his Twitter account hours after the fight. “Should have chucked a couple of quid on myself if I knew lol. People are nuts get hit down once get back up, get wobbled to my boots with a left hook but still dull enough to try and act hard and pretend not to be hurt and call him on and I've taken a dive brilliant x.

“If I would av covered up like a koala and lost on points would that have been a fix?x”

Despite the best attempt by both parties to laugh it off, any such matter requires the Gambling Commission to at least look into allegations to determine the validity of such claims. As much is underway, with BoxingScene.com having learned that the British Boxing Board of Control (BBBoC) has been made aware, although for now it is a subject matter for which the Gambling Commission will take the lead.

"Our Sports Betting Intelligence Unit works with all the major sports governing bodies and take any allegations of match-fixing very seriously," notes Barr. "Where appropriate we will support others or take enforcement action as required. For example, all operators supplying services to consumers in GB must tell us about suspicious betting patterns or individual bets – where appropriate we share that information with partners as part of investigations."

According to boxing betting expert Jim Karas, several sportsbooks have not yet paid out any bets placed on Allen to win in round three, given the current open investigation.

For now, the result stands as a knockout win for Allen, his first since a 3rd round stoppage of one-time Top 10 heavyweight contender Lucas Browne last April. The career-best victory was followed by a punishing 10th round stoppage at the heavy hands of countryman David Price last July. Allen sat out the rest of the year, with at least one planned comeback thwarted over concerns for his well-being outside the ring.

The seven-year pro heavyweight has never quite evolved into a full-fledged contender. Among the more honest boxers when it comes to self-assessment, he points to his current status to offset any such cries of wrongdoing.

“People were saying it was a fix because I was planning on it being a six-round move around,” noted Allen (18-5-2, 15KOs). “A few of my mates had a lot of money on the points win and it didn’t come in but I am not the sort of guy who picks a round to win, I am not really good enough to do that.”

Not all of the commentary external to the fight has come in an accusatory tone.

“Reading Dave Allen fight was fixed,” Billy Joe Saunders, England’s unbeaten two-division and reigning super middleweight titlist stated on his verified Twitter account. “Plz stop talking s--t people always trying to bring people down in this world he won his fight fair and square against a game opponent who took some big shots and is limited why would he do this at that stage when [he has] been in bigger fight[s].”

[QUOTE=CocoonOfHorror;20387338]Any UK-based punters know what a typical max bet on a round prop in a minor undercard fight is? Betfair/exchanges and matching are the thing I'm most interested in. How much was matched at what odds? And how much was…

Yeah no way would Eddie Hearn be involved something this minor, guy has a something like a billion dollar dazn contract, probably tens to hundred million dollar sky deal, plus the rest, risking it all on a $50K fixed fight…