A laboring start gave way to an explosion from Allen, who twice floored Darch with the latter putting him down and out at 0:53 of round three.

Allen (18-5-2, 14KOs) has been out of the ring since a 10th round stoppage loss to countryman David Price last July, a fight which drew concern for his health and well-being as he was hospitalized. There were opportunities to return to the ring in the final quarter of 2019, only for a team decision to keep him benched until the new year. 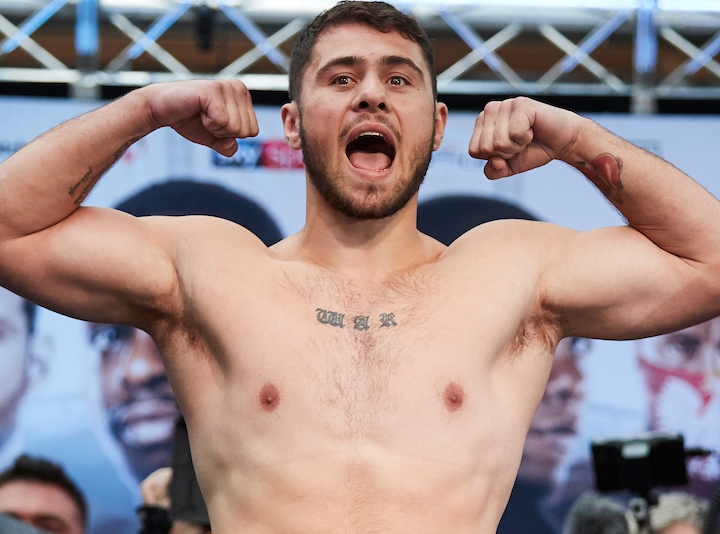 With that came his appearance on Saturday’s show, where the heavyweight gatekeeper showed up at a puffy 262 ¾ pounds simply for the sake of getting rounds under his belt. His mere presence was enough to turn away Wales’ Darch (12-12-1, 1KO), who is now winless in his last nine starts. Allen played with his food in round one, flicking a lazy jab and short right hand while bouncing on his toes.

Darch attempted to take advantage of his opponent’s invitation to fight back, offering a decent account of himself in round two although never to the point of turning the tide.

It was enough to awake a sleeping giant, as Allen decided to put up a fight in round three. The moment he did, the fight was essentially over. Darch hit the deck seconds into the round, managing to beat the count although it was clear that the end was near.

Allen closed the show in emphatic fashion, a sequence set up by a left hook downstairs and then a crushing left hook to the chin. Darch froze in place before retreating, with the follow up putting him flat on his back for the ten count.

The win is Allen’s first since an impressive 3rd round stoppage of Lucas Browne last April.

The bout served in supporting capacity to the ring return of local hero Kell Brook, as the former welterweight titlist faces Massachusetts’ Mark DeLuca (24-1, 13KOs) in a scheduled 12-round junior middleweight contest.

[QUOTE=Rockybigblower;20377478]With that win Dave Allen is back in contention. As Eddie Hearn will tell you...these guys are just one good win away from a title shot vs AJ. Then he will throw them in against Chisora or Whyte for the…

[QUOTE=Rockybigblower;20377478]With that win Dave Allen is back in contention. As Eddie Hearn will tell you...these guys are just one good win away from a title shot vs AJ. Then he will throw them in against Chisora or Whyte for the…

Got to be honest I thought Dave Allen was finished but now I think he is the greatest fighter in the world. It's hard to see anyone beating him

[QUOTE=LetOutTheCage;20377170]Wish Allen would go away, this fight card by Hearn has largely been a joke.[/QUOTE] With that win Dave Allen is back in contention. As Eddie Hearn will tell you...these guys are just one good win away from a title…

Careful just watched a PBC video of Ortiz struggling to get an unfit Allen out when he was fed him as cannon fodder, that's his claim to fame and how he got his break. Of course, now Ortiz has been…