Dave Allen Blasts Out Samir Nebo In One, Continues Roll

Dave Allen got another stoppage win to continue his fairytale story in the sport.

The Conisbrough heavyweight was set for 10 rounds of action on Saturday night.

Allen, who won an official eliminator for the British title with a stunning fourth-round stoppage over Nick Webb back in July at the O2 Arena in London, took on Germany’s Samir Nebo. 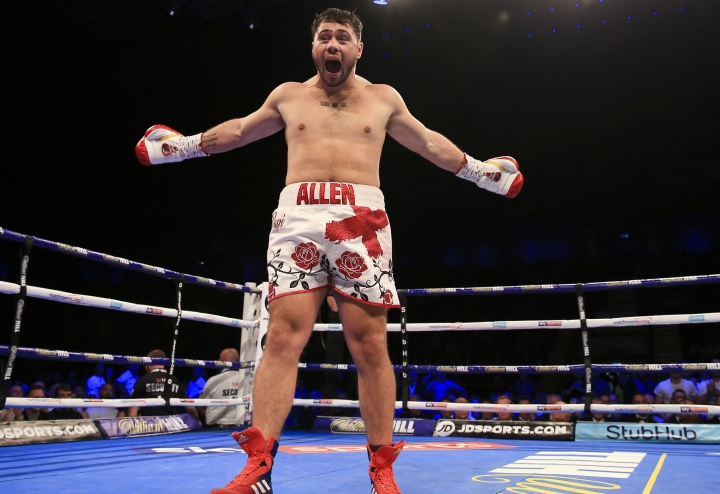 And the visitor felt the power of the likeable man, who calls himself ‘The Doncaster De La Hoya’, exclusively live on Sky Sports, as part of the supporting cast to Lewis Ritson’s clash against Francesco Patera for the vacant European lightweight title at the Metro Radio Arena in Newcastle.

Allen landed a brutal left hook after just 65 seconds of the opener to send Nebo to the canvas, writhing in pain and unable to continue.

The hope now will be that Allen can remain active towards the back end of the year and potentially fight at least once more pre-Christmas.

Eddie Hearn is an amazing promoter. He somehow made guys like Sam Eggington and Dave Allen recognizable names.

[QUOTE=jackkeane6;19192499]You clearly don’t know a thing about boxing. I hate AJ but Wilders clearly ducked him[/QUOTE] AJ's coach, carl froch, lennox lewis and most of the globe all know AJ dont want the fight. Even AJ has come out and…

[QUOTE=DougalDylan;19192770]Your joking Wilder is protected more than ever the WBC rankings are one big rig . How did Fury get that position on the basis of Sefari and Pianeta ? Al Haymon and Finkel spent a lot of money doing…