Danny Roman: I'd Like To Unify With Rey Vargas or Isaac Dogboe

A sellout crowd of more than 12,600 fans packed Ford Center at The Star in Frisco, Texas - In the televised co-feature, Danny Roman defended his WBA Super Bantamweight World Championship with a unanimous decision over previously undefeated Moises Flores in a 12-round fight that was scored 116-112, 118-110, 120-108.

The champion Roman (24-2-1, 9 KOs) was the faster and sharper fighter from the opening bell. Roman, who was making the second defense of his 122-pound belt, pounded the body repeatedly over 12 rounds, connecting on a staggering 50 percent of his body shots.

Flores (25-1, 17 KOs), who failed to make weight for the title fight and was unable to win the belt, tired in the latter half of the fight and was largely a stationary target for Roman for 12 rounds. 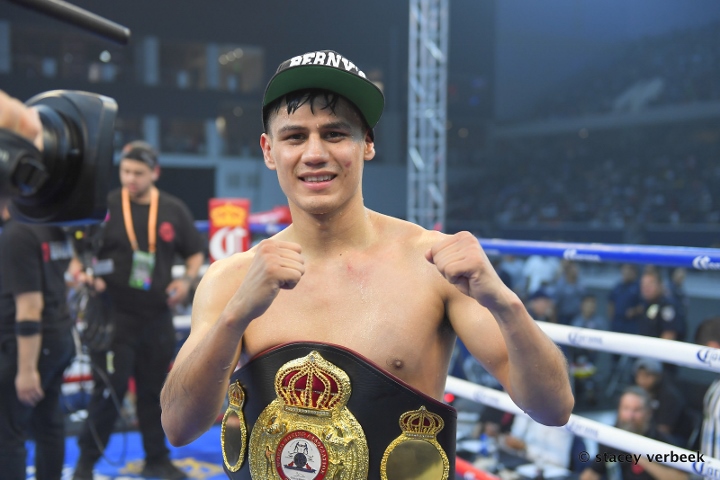 Both fighters threw more than 1,000 punches, yet it was Roman who was the more effective boxer, connecting on an impressive 42 percent of his power shots.

"I was trying to box him. We tried to do a smart fight," Roman said. "We tried to take him out, but unfortunately we couldn't.

"I would like to unify. I would like to challenge any of the champions. I'd love to face Rey Vargas or Isaac Dogboe. I don't mind going back to Japan either."

"I know I messed up in training," Flores said. "I didn't make the weight, but I still wanted to perform and give it everything I have.

"We both hit each other a lot. I hit (Roman) with some good shots, I just couldn't finish him. I was probably around 60 percent energy-wise. From the fifth round on I had to just fight with pure heart.

"(Roman) put on a great show for the fans, and that's what makes me feel great. That's all I wanted was to put on a good fight."

Dogboe will whoop Roman. It won't go the distance.

[QUOTE=Cadet Bonespurs;18869786]Dogboe would destroy him....he likes phone booth boxing a little too much[/QUOTE] Dog bowls a good fighter but hes not special. Every clean punch Magdelano landed in the 1st 3rds buckled his knees, a good combination puncher with a…

This fight was better than Mares vs. Santa Cruz.

Vargas sucks. All the other champs beat him.

Dogboe would destroy him....he likes phone booth boxing a little too much