It may be that part of the appeal of former World Jr. welterweight champion and welterweight beltholder Danny Garcia (34-2, 20 KO) is the perception of vulnerability.

That might not be the same as actual vulnerability. As Garcia has proven many times over the years, he’s a hell of a tough out. Lucas Matthysse and Amir Khan can attest to that.

Dotted around nights like those are closer, more debatable contests. Lamont Peterson, Mauricio Herrera, and Ashley Theophane are three men who could make at least a reasonable for having done enough to best Garcia over the years. All came up just short. Still only 31, Garcia’s sole official defeats came to Keith Thurman and Shawn Porter, two of the top four-five active welterweights in the world.   It’s one of the toughest careers to figure in recent vintage.

Is Garcia a guy who fights to the level of opponents or a game overachiever? Could he be both?

If it’s the former, look for a memorable affair on Saturday night (Fox, 8 PM EST).

Garcia will face 29-year old Adrian Granados (20-6-2, 14 KO) in the sort of battle that, on paper, would appear to be something to keep Garcia occupied until rematches with Thurman and Porter, or fresh clashes with a Manny Pacquiao or Errol Spence, could come available.

Fights aren’t contested on paper and Granados is the sort of guy who can sneak up. In 2015, he changed the trajectory of his career with an upset stoppage of previously undefeated Amir Imam and came up just short in a split decision loss to Adrien Broner in 2017.

As Brandon Rios showed last year, an underdog can still make Garcia work and give the fans a hell of a show win or lose.

What that presents in an interesting quandary for viewers. Coming over free airwaves on Fox, Garcia-Granados will air opposite ESPN’s first foray into pay-per-view as Terence Crawford defends the WBO welterweight belt against Khan. 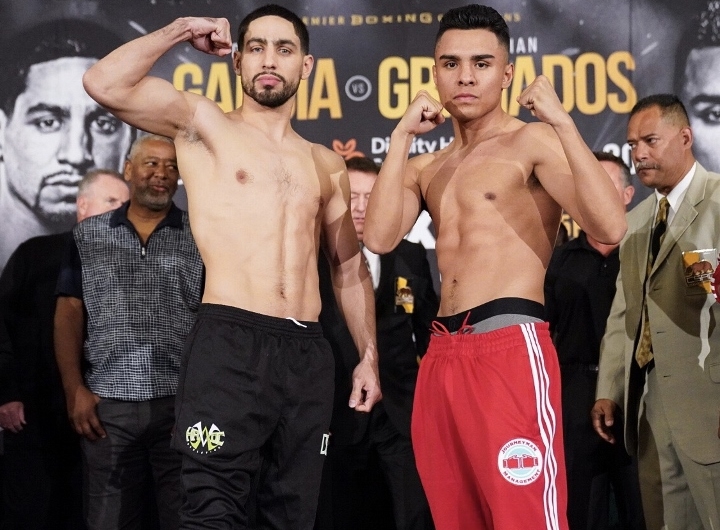 With many families also budgeting in spring vacations and Easter Sunday, is Garcia-Granados the sort of solid bargain alternative that could keep them from sending extra coin the way of Crawford-Khan?

Fight fans have long complained about counter programming in boxing. The thinking goes that boxing’s audience has dwindled over the years and growth is best served by more singular spotlights. It’s an argument that doesn’t make much sense given how many major sports counter program themselves and other sports all year long. Not everyone wants to watch every fight or every style clash of fighters.

That said, boxing still so overwhelmingly moves their calendar to Saturday’s it can make for real congestion right now. Last weekend, Showtime, FS1, and DAZN all had shows at the same times. Three shows at once on a Saturday is becoming a dizzying regularity.

This Saturday is one of those times though where counter programming could be a really good thing. Crawford-Khan isn’t an easy sell. The undercard is pretty good for those who want to watch rising stars Teofimo Lopez and Shakur Stevenson in good development matches for both, but the main event is tricky.

Khan is a streaky, chinny fighter with lots of physical talent who hasn’t really looked very good since a knockout loss to middleweight champion Saul Alvarez. Crawford is heavily favored with good reason. That doesn’t mean the odds will be right. Khan is still a pretty young guy and if he gave Crawford hell it would be no surprise.

If he gets decked again, that would be no surprise either.

In 2019, boxing is generating television revenues in lots of places. ESPN is asking pay-per-view prices this week, asked for a monthly subscription fee for it’s ESPN+ app if fans wanted to see Vasyl Lomachenko last weekend, and for cable subscribers still gets a healthy chunk of basic cable bills for every household they are in. DAZN comes with a fee. Showtime comes with a fee and pay-per-view possibilities. Fox is in the pay-per-view game now too.

With that many fee possibilities, there will be more Saturday’s like the one coming up. Every fight isn’t worth every penny being asked but those are choices individual consumers will have to make. For fans feeling like they’re stretching their budget too far, who still need their boxing fix, counter programming that provides the potential for real action at a more bargain rate will be critical to servicing the whole of the fan base.

Garcia-Granados has a good chance to fit that bill.

One week to go before the best card of the year so far (on paper). The DAZN show headlined by Srisaket Sor Rungvisai-Juan Francisco Estrada II kicks off a hell of a couple months on the streaming service…Part of that run includes the finally resolved Ivan Baranchyk-Josh Taylor Jr. welterweight clash. The WBSS may not come back for a third iteration but everyone should want to see the second round of tournaments through…Ratings were less than stellar for the Claressa Shields-Christina Hammer fight last week. It might be a good idea to attach Shields to a couple of high profile undercard slots if possible to expose her to more of the audience as they attempt to build a new brand for women’s boxing in the US. This scribe would happily watch the hell out of Shields-Cecilia Braekhus no matter the television slot…The Gifted was just coming into its own. Too bad that Fox cut that one loose…Jarrell Miller blew it but it’s hard to get too worked up about the fight falling apart if it ultimately does. Miller had done nothing of real substance to earn a title shot…Tiger Woods winning the Masters was as well spent a Sunday as there has been in quite some time.

If thats considered a good fight then it doesnt say much for the rest of boxing on tv. Granados is 20-6.

Nice article- except for one thing: "Saturdays" does not have an apostrophe.

I dont got any problem having 2 shows on the same time I got DVR to solve that problem... most of the time I just watch the one that is more interesting then on Sunday morning o see the other…

If it wasn't for Shakur and Teofimo, I wouldn't have dropped $70, and just watched DSG vs. Granados for free! Thank God for DVRs!