Danny Garcia: My Legacy Will Be Incomplete Without Winning Title At 154

Danny Garcia wants to add another welterweight title to his resume as soon as possible.

The two-division champion from Philadelphia is willing to fight any elite welterweight whenever the COVID-19 pandemic ends, and the boxing business returns to normal. Eventually, however, Garcia will move up to the junior middleweight division.

It always was part of Garcia’s plan to compete at the 154-pound limit, which could happen once he fights twice more within the welterweight division. Garcia explained his desire to move up seven more pounds during a recent episode of “The PBC Podcast.”

“I wanna become a champion in a third division,” Garcia said to co-hosts Kenneth Bouhairie and Michael Rosenthal. “And I feel like that was always my goal, to win a belt at 140, 147 and 154. And those were my goals in the boxing world. So, I feel like until I win a title at 154, then my legacy’s not complete, as far as like me, my goals.” 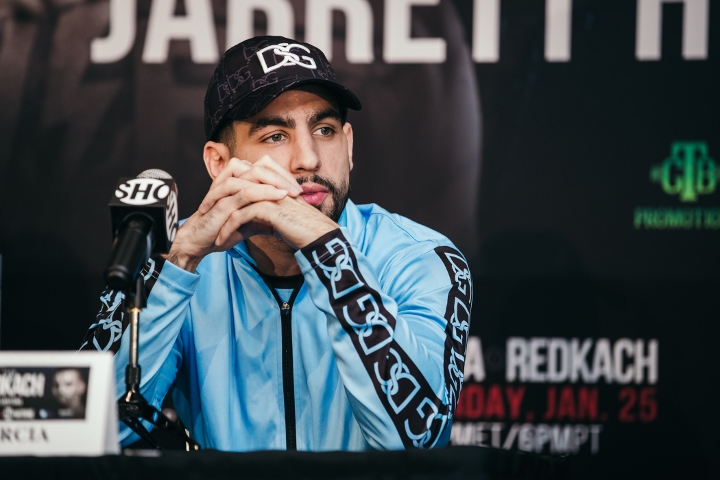 “I feel like I have two more big fights left at this weight class, at 147,” Garcia said. “You know, either a [Manny] Pacquiao or a [Errol] Spence, and then I feel like I wanna rematch [Keith] Thurman or [Shawn] Porter, get that victory. And then I feel like there’s nothing else for me to do at 147, because those are all the fights that people wanna see me fight. And I faced everyone at 147 already. So, I feel like a new journey could be at 154.”

Thurman and Porter are the only opponents who’ve beaten Garcia since he made his pro debut in November 2007.

Thurman (29-1, 22 KOs, 1 NC), of Clearwater, Florida, edged Garcia by split decision in their 12-round, 147-pound championship unification match in March 2017 at Barclays Center. Las Vegas’ Porter (30-3-1, 17 KOs) beat Porter by unanimous decision in their 12-round fight for the then-unclaimed WBC welterweight crown in September 2018 at Barclays Center.

“I wanna win another welterweight title,” said Garcia, who’s also a former WBA/WBC 140-pound champion. “I feel like I need another big win at 147, and then I wanna win a title at 154. I feel like my legacy will be complete after that.”

[QUOTE=JakeTheBoxer;20531899]This guy has better resume than many more hyped guys. Holt, Khan, Matthysse, Morales, Judah, Malignaggi, Peterson, Guerrero, Rios If Crawford is future HOF, than Garcia is the king of HOF`s.[/QUOTE] Genius! Danny Garcia has an excellent resume! Better than…

Hopefully, he can win a title at 54 and call it a career because obviously his heart is not in the sport anymore. He is only in it to make a living. Fight fans be damned! All he ever fight…

This guy has better resume than many more hyped guys. Holt, Khan, Matthysse, Morales, Judah, Malignaggi, Peterson, Guerrero, Rios If Crawford is future HOF, than Garcia is the king of HOF`s.

He wants a title at 154? The only way he got a title at 147 was fighting Guerrero for Floyd's vacated WBC belt. Haymond probably gave Mauricio Sulaimán a hand job and some cocaine to even get that made as…

[QUOTE=Mister Wolf;20531239]Egis would be a step up from Rob Salka, Shot Paulie, Shot Brandon Rios, Journeyman Adrian Granados, Journey Baranchek(Who was losing fights at 130lb), or Shot Robert Guerrero. You got anyone to name who Danny actually beat at welterweight…