Danny Garcia likely never had Adrian Granados on his radar at any point prior to being offered such a fight, but the name for years has made the former two-division titlist smile.

“I’ve seen Granados fight a few times,” Garcia mentioned of his upcoming opponent, as the two collide atop the April 20 edition of PBC on Fox at Dignity Sports Health Park in Carson, Calif. “And by the way, thank you for fighting that one dude who called me a cherry picker.”

The “dude” in reference is Amir Imam, who for much of 2015 served as the mandatory challenger to the 140-pound title Garcia held. The fight never came about, with Garcia instead opting to test the welterweight waters before abandoning the division altogether. 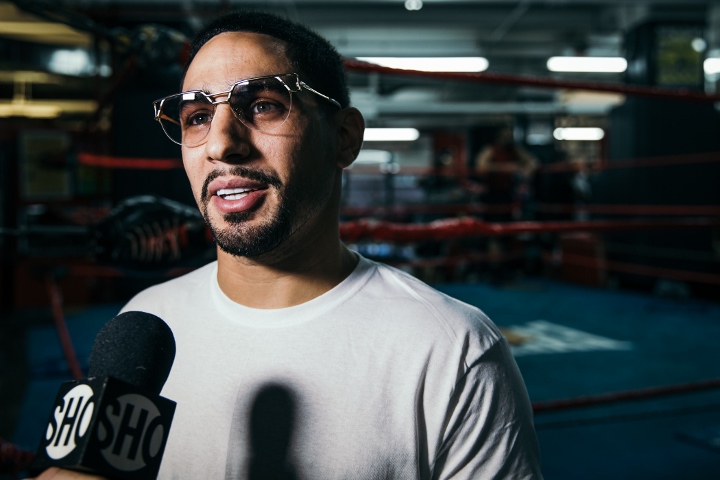 Imam chose to bide his time by taking a stay busy bout with Granados, a Mexican-American from the Chicagoland area who scored a career-best win in the form of a shockingly one-sided 8th round upset knockout.

“You knocked him out, so thank you for that,” Garcia (34-2, 20KOs) extended to Granados, though the extent of his complimentary mood during Tuesday’s press conference at The Palm in Los Angeles. “Other than that, though, your ass is grass.”

The bout will mark Garcia’s first since a heartbreaking loss to Shawn Porter in their vacant welterweight title fight last September. It was the second defeat in the span of three fights for the Philly-Rican, who dropped a tightly contested decision to Keith Thurman in their March ’17 welterweight title unification bout.

If he has any say about it, Granados plans to make it three losses in four fights—and has a far different recollection of the aforementioned favor extended to his upcoming ring rival.

“Danny mentioned that I beat Amir Imam, who called him a cherry picker,” Granados (20-6-2, 14KOs) stated, though providing additional context. “But then he bashed me, saying Imam lost to some dude with three or four losses. So, as far as an ass-beating, I’m definitely coming here to kick his ass.”

The fighting words introduced were met in jest rather than haste.

“It’s all good,” Garcia calmly replied. “It’s a big fight, I expect him to be confident. His ass is grass, though, and I’m the lawnmower, baby.”

The remarks drew a hearty rise out of the crowd, but—for Garcia—not the final say.

“As far as you cutting the grass, ain’t nobody cut grass better than Mexicans,” Granados shot back, offering his own figurative pre-fight guarantee.

[QUOTE=deanrw;19608134]Today I overheard him telling Granados that he was a jive turkey.[/QUOTE]And he probably went home and called his wife his "Home Squeeze".

[QUOTE=AdonisCreed;19600603] [B]Mauricio Herrea beat him :) [/B] I think Granados will do good early on but he'll leave himself open to get knocked down by Danny and lose a decision.[/QUOTE] True unofficially, but Danny's improved since then; not just relying…

[QUOTE=yoshik;19600621]Mikey's done with WW. No action there.[/QUOTE]I wouldn't say that just yet! Omar Figueroa Jr., DSG, and Pacquiao, are all viable opponents! Pacquiao said he wants to come back to Dallas, but he didn't say he'll be fighting Errol Spence…