NEW YORK – Other than that Ivan Redkach fought from a left-handed stance, not much of what Redkach presented Saturday night replicated what Garcia should expect from Manny Pacquiao or Errol Spence Jr.

Garcia basically beat up an overmatched Redkach for most of their 12-round welterweight fight and cruised to a unanimous-decision win at Brooklyn’s Barclays Center. Judge Tony Paolillo scored 10 rounds for Garcia (118-110) and judges Glenn Feldman and Don Trella scored nine rounds apiece for the former two-division champion (117-111).

Philadelphia’s Garcia hopes his victory over Redkach leads to a much more meaningful fight against Pacquiao (62-7-2, 39 KOs), the WBA welterweight champ, or Spence (26-0, 21 KOs), who owns the IBF and WBC belts.

“You know, either or,” Garcia told Showtime’s Jim Gray when asked whether he’d prefer facing Pacquiao or Spence. “Either of those fights I would like to have.

About the most remarkable thing about the Garcia-Redkach fight is that Garcia said Redkach bit him on his left shoulder during the ninth round.

The 31-year-old Garcia (36-2, 22 KOs), a former WBC welterweight champ and ex-WBA/WBC 140-pound champ, was regularly listed by Internet sports books as a 25-1 favorite to defeat Redkach in a monotonous match that unfolded accordingly.

If nothing else, Redkach (23-5-1, 18 KOs) avoided what would’ve been the third knockout defeat of his 10-year pro career.

Before Saturday night, he’d been stopped by John Molina Jr. and Dejan Zlaticanin. 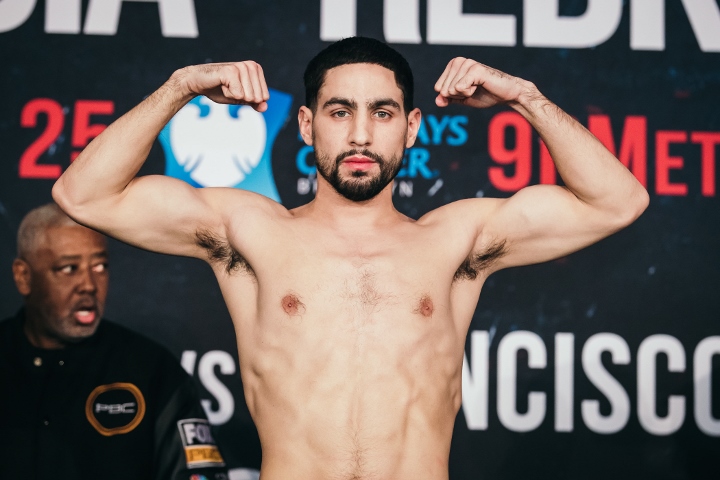 Redkach dropped Molina in the second round of their back-and-forth slugfest, but Molina came back to drop Redkach in the third and fourth rounds. Molina won that junior welterweight brawl by fourth-round knockout in December 2017 in Lancaster, California.

Zlaticanin, then undefeated, dropped and stopped Redkach in the fourth round of their lightweight bout in June 2015 in Birmingham, Alabama.

Redkach continued to show toughness in the 10th, 11th and 12th rounds, but Garcia was in complete control by then and Redkach couldn’t hurt him.

A New York State Athletic Commission physician examined Redkach before the ninth round. Once it began, Garcia continued to batter Redkach with right hands and body shots.

Garcia blasted Redkach with a right hand in the second half of the ninth round. Redkach responded by waving Garcia forward.

Later in the ninth, Garcia caught Redkach with a thudding right hand that lifted Redkach off his feet.

Garcia continued attacking Redkach’s body throughout a one-sided fifth round in which Redkach took a significant amount of punishment.

A counter left hook by Garcia knocked Redkach off balance about 55 seconds into the fourth round. Garcia drilled Redkach with a right hand about 20 seconds later.

Garcia attacked Redkach’s body later in the fourth, which caused Redkach to stick out his tongue at the aggressive Garcia.

Garcia had trouble catching Redkach with clean punches throughout the third round. Redkach didn’t land much on Garcia in that third round, either.

Following an uneventful first round, Garcia grazed Redkach with a right uppercut as Redkach backed into a neutral corner with just over a minute to go in the second round. Redkach quickly fired back a right hand that landed.

Redkach landed this higher-profile fight against Garcia because he knocked out Devon Alexander in the sixth round of Redkach’s welterweight debut June 1 in San Jacinto, California. Down 48-47 on all three scorecards, Redkach dropped Alexander three times in sixth round before their 10-rounder was stopped.

The 32-year-old Alexander (27-6-1, 14 KOs) isn’t much older than Garcia, but the former welterweight and junior welterweight champion is widely viewed as a faded fighter.

Garcia fought for the first time since he knocked out durable veteran Adrian Granados in the seventh round of their April 20 fight at Dignity Health Sports Park in Carson, California. Granados (20-8-2, 14 KOs, 1 NC) had never been stopped inside the distance before Garcia knocked him down three times and knocked him out.