Daniel Roman: I Want My Name To Be Mentioned As The Best Of The Night

By the time he ran through Shun Kubo to claim his first world title, the word was out that Daniel Roman was no longer a spoiler but instead a junior featherweight to watch.

The streaking all-action boxer from Los Angeles has since become a unified titlist, though somehow remains better known as a show-stealer.

“I guess it’s a compliment,” Roman (27-2-1, 10KOs) joked to BoxingScene.com. “It’s just the way I fight, it comes natural to me. It’s flattering that when I’m on a card my fight is the one that everyone remembers. I just love boxing, and I love to fight.”

The aptly-nicknamed baby faced assassin once again has the opportunity to walk away with the fight that everyone best remembers as he defends his unified titles versus Uzbekistan’s Murodjon Akhmadaliev (7-0, 6KOs), a 2016 Olympic Bronze medalist who has taken the express route to the title stage. 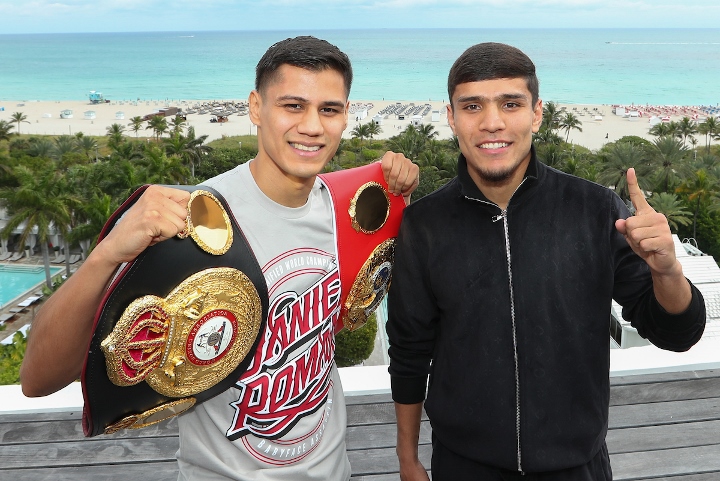 Their clash serves as part of a loaded pre-Super Bowl show in Miami, Florida, with the DAZN-streamed bill topped by unbeaten middleweight titlist Demetrius Andrade (28-0, 17KOs) in a voluntary defense versus Ireland’s Luke Keeler (17-2-1, 5KOs). Also on the show, resurgent junior lightweight Tevin Farmer (30-4-1, 6KOs) attempts the 5th defense of his crown versus 2012 U.S. Olympian and former title challenger Joseph ‘Jo Jo’ Diaz (30-1, 15KOs), a matchup along with Roman-Akhmadaliev which have generated the most positive pre-fight press among the boxing’s hardcore fan base.

Roman’s accolades have been earned the hard way, having rattled off 19 straight wins after stumbling out to an 8-2-1 career start. The bulk of his run was established on the very Thompson Boxing Promotions fight circuit in Ontario, California where he suffered his lone two career losses, along with the first of three straight wins over unbeaten opposition. An eight-round shutout of previously undefeated Marlon Olea led to his ShoBox debut in January 2017, claiming the “0” of San Antonio’s Adam Lopez which paved the way for his first career title shot.

A ninth-round stoppage of then-unbeaten titlist Kubo was the first of two road fights in Japan for Roman, turning away the challenge of Ryo Matsumoto in his first title defense. His third title defense came on the undercard of the inaugural stateside edition of DAZN-USA, scoring a 10th round stoppage of England’s Gavin McDonnell in an Oct. 2018 performance which left fans in anticipation of his next one.

Roman went well beyond the call of duty in his response to that claim, outlasting then-undefeated TJ Doheny in their Fight of the Year-level 12-round war to unify two titles last April in Inglewood, California. The fact that it stole the show from a fantastic rematch which saw Juan Francisco Estrada claim the World 115-pound crown to avenge a prior defeat to Srisaket Sor Rungivisai spoke volumes of Roman’s appeal to boxing diehards.

It’s also what has the sport’s most faithful tuning in this Thursday in a bout which most see as a 50/50 matchup and believed to be the fight of the night.

Roman wouldn’t have it any other way—though of course will settle for one welcomed alternative.

“Especially on this Super Bowl, three world title fights plus another world champion (record-setting seven-division titlist and pound-for-pound entrant Amanda Serrano in a non-title fight), yeah everyone is going to be looking to steal the show,” Roman admits. “So, it means a lot that people look forward to our fight the most.

“Don’t get me wrong, though. If I can get [Akhmadaliev] out of there without having to go to war, I’d love that too. A good fight and a smart fight can be just as [productive]. But yeah, I want my name to be mentioned as the best of the night, whether it’s the best fight of the night, the best performance—or both.”

I got Roman winning this.