Daniel Jacobs: Caleb Plant Has A Lot Of Flaws; He Hasn't Been Tested

Daniel Jacobs has altered his rankings of super middleweight champions.

The unbeaten Plant, who owns the IBF super middleweight title, took offense to the comments Jacobs made to Hearn. Plant dubbed Jacobs “old” and “on his way out” during a subsequent interview with FightHype.com. 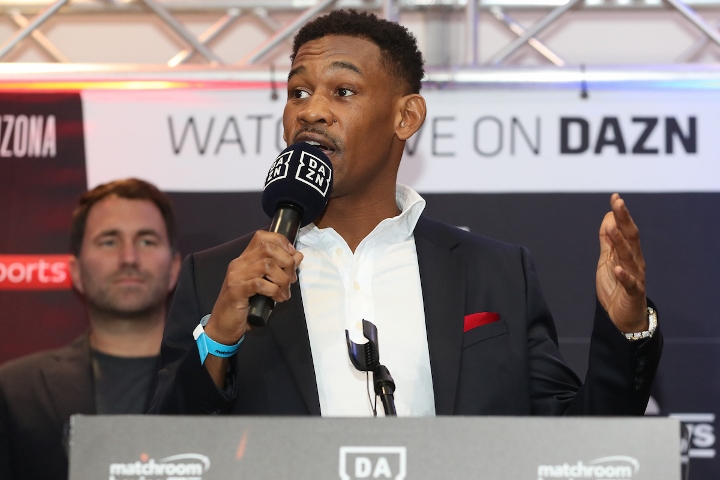 “Obviously, a boxer wants to get [under] another boxer’s skin,” Jacobs said during a recent appearance on “The Ak And Barak Show” on SiriusXM. “He wants to say things. I was only being honest when someone asked me who I thought was the weakest link [among the super middleweight champions]. But I did forget about B.J. Saunders. And I would like to say B.J. Saunders, out of the champions, is the weakest link.

“But I don’t take back my statements, as far as what I said about Caleb Plant. He does have a lot of flaws. I think he hasn’t been tested. I think he’s still kinda fresh, he’s still kinda green, and if he wanna get it on, he already know. And I’m the type of fighter, I can go. I have opportunities to work for other, different promotions. If that fight wants to be made, we can do it. You know, I’m his big brother. He know what’s up.”

Meanwhile, the 27-year-old Plant (20-0, 12 KOs), of Ashland City, Tennessee, contended during the aforementioned FightHype interview that a bout between him and Jacobs is unlikely because Plant is part of Al Haymon’s Premier Boxing Champions organization and Jacobs is promoted by Eddie Hearn’s Matchroom Boxing USA. Jacobs has just one fight remaining on his Matchroom contract, though, and still is advised by Haymon.

“Danny Jacobs is a good fighter, and he’s been around for a while,” Plant said. “But he’s more of an athletic fighter. You know, he fights more off his athletic ability. … I don’t think Danny Jacobs is the man for the job. You know what I’m saying? He’s been beat, he’s been in some tough fights, and I just don’t think that he’s an A-class fighter.”

Nevertheless, the thought of boxing Jacobs appeals to Plant.

“I would love to fight him,” Plant said. “I would put a boxing lesson on him.”

Jacobs (36-3, 30 KOs) also mentioned that he would like to settle a personal score with Gabe Rosado. A fight with Philadelphia’s Rosado (25-12-1, 14 KOs, 1 NC) appears much more likely to happen next for Jacobs than super middleweight title fights against Plant, Saunders or Smith.

[QUOTE=Chollo Vista;20568755]I remember asking you several years ago who did you fight and what's your boxrec. Several year's later we're still waiting for your answer? You're a lying simpleton :lol1:[/QUOTE] I've been ghost from the forum for like a year…

[QUOTE=Chollo Vista;20568732]You're a liar, just saying. I use to spar Canelo. Prove I'm lying? See how silly you are as a poster?[/QUOTE] Lolololol Great reply Lolololol

As much as I respect Daniel Jacobs; He is out of his goddamned mind. Caleb Plant kicks his ass. I mean he doesn't stand a chance. For one, he is not going to over power Plant and he's sure as…

[QUOTE=Robi13;20569012]what proof do you have that you in fact did fight 😂 anyone can talk sh.it and say anything... like trumps my uncle[/QUOTE] Guys like myself, Ghost of Dempsey, Rockin.. all the guys that I know have fought, have educated…

[QUOTE=4truth;20568857]Plant looks good but still a bit of an unknown quantity. I got Jacobs till I see something different.[/QUOTE] I agree. I don’t see him keeping up with Jacobs.