Daniel Dubois To Return On July 13 - Joe Joyce Next?

Daniel Dubois claimed yet another title with what many will see as his most risky performance to date.

The 21-year-old took on Richard Lartey of Ghana in something of a firefight, exclusively live on BT Sport, at the SSE Arena in Wembley, London.

Dubois, last in action at the Royal Albert Hall in Kensington just seven weeks ago, was rocked on a few occasions against the visitor, and was tested during certain moments when he traded punches with his opponent. 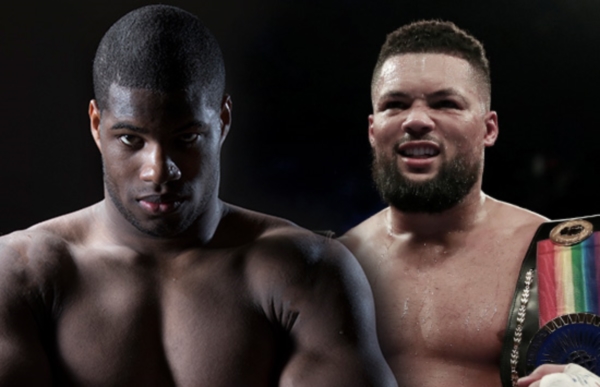 But Dubois -- who was pushed back for the first time in his career by some stiff shots -- landed a huge right hand that dropped Lartey, who struggled to get to his feet.

The referee Bob Williams called a halt to proceedings after one minute and 50 seconds of the fourth round to award Dubois the vacant WBO Global heavyweight crown.

"I was so busy trying to hit him with hurtful shots that defence left my mind for a few rounds," said Dubois, who is now on a collision course with Commonwealth heavyweight champion Joe Joyce. "But then I started boxing smart and I learned my lesson, adapted to it and coped after being clipped a few times. It's about being careful at all times."

Joyce, who was at ringside for the fight having recently signed with Frank Warren and will return to the ring himself on May 18 at the Lamex Stadium in Stevenage, as part of the supporting cast to Billy Joe Saunders' vacant WBO interim super-middleweight title clash against Shefat Isufi, exclusively live on BT Sport in the UK.

"The big fights are being lined up and all I've got to do is keep winning, keep improving and sooner or later I'll be sharing the ring with these guys," Dubois added. "As long as the preparation is good, I believe I can beat anyone. It's a great experience and I showed that I have the heart to make it."

Joyce said: "[The fight with Dubois is] an option. I should be out in July [after May] and we'll see what's out there. I'm going to discuss my options and it's an interesting one.

"I'm on the verge of world title level, I've got fights for the WBA 'regular' and European [titles] lined up, but I want to be a world heavyweight champion."

Both Dubois and Joyce, along with WBC International Silver champion Nathan Gorman, will feature at the O2 Arena in London on July 13, with a press conference expected to take place in the near future to confirm further details.

[QUOTE=Eff Pandas;19699876]Mike Tyson was a force of nature coming up. I don't see that in DDD...or hell ANYONE like I saw it in Mike back in the day. But sure I get your overall point & with this Joyce thing…

[QUOTE=GlassJoey;19702055]The sad thing is, I actually find watching them speak to be less awkward than anything that the main BT presenter does.[/QUOTE] The whole BT presentation and cast is abit hard to watch in general for me

[QUOTE=P4Pdunny;19701516]Dubois is as camera shy as they come and Joyce can barely string a sentence together. They should never be put together with mics again.[/QUOTE] The sad thing is, I actually find watching them speak to be less awkward than…

[QUOTE=DuckAdonis;19699840]Can you believe Lartey is only 27 years old? Wow![/QUOTE] Lol he aint 27, he had visa issues which stopped him from coming here to fight Joyce before and almost had Saturdays fight cancelled. I bet those are because he's…

[QUOTE=GlassJoey;19699785]They confronted each other on BT sports like they were actually secret lovers who don’t want the fight. I also can’t believe BT let Alan Partridge present their cards.[/QUOTE] Dubois is as camera shy as they come and Joyce can…