Daniel Dubois Knocks Out Nathan Gorman in Fifth Round

Daniel Dubois turned a 50/50 domestic pairing into the biggest moment of his pro career.

The unbeaten heavyweight made a huge splash in the division, scoring a 5th round knockout of countryman Nathan Gorman in their British title fight Saturday evening at O2 Arena in London, England.

Knockdowns scored in rounds three and five paved the way for Dubois’ biggest win to date.

The billed coin-fiip matchup was precisely that close in a nip-and-tuck opening round. Gorman offered a greater variety of punches than did Dubois who generally came straightforward. Neither left anything to chance in a fast-paced round two, both boxers letting their hands go early before Dubois seized the initiative.

A fun sequence at center ring saw both heavyweight score with potent right hands. Gorman initially appeared to get the better of it but a preceding left hook from Dubois coupled with the right opened a cut just outside Gorman’s left eye.

It would be the least of his problems just moments later. Dubois stormed out the gate in round three, taking the fight straight to Gorman. The tactic reaped major dividends, as a right hand shot had the pudgy but talented heavyweight in trouble and with a volley of punches forcing him to the canvas in a heap.

“I just thought, control him with the jab and work my right hand in and everything will go right,” said Dubois (12-0, 11KOs) of his game-plan, which was executed to perfection. 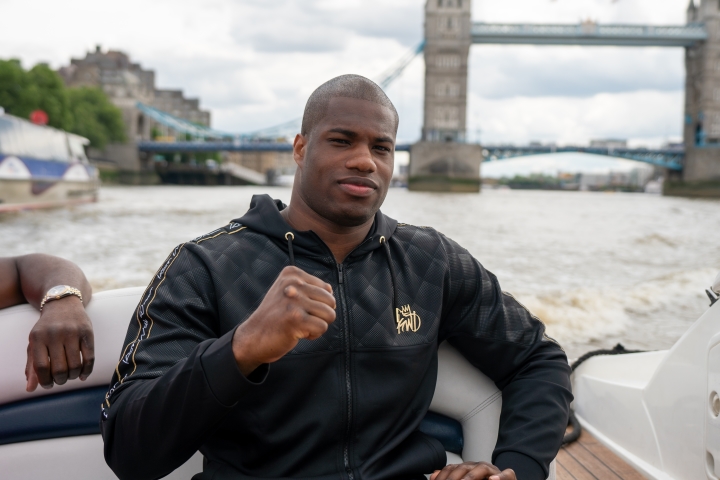 Gorman beat the count but had to withstand an ensuing onslaught from Dubois, who enjoyed by far his best round of the fight to that point.

“I felt like I was really in the fight, then I got caught with a good shot, you know. A very, very big shot,” Gorman said in suffering the first knockdown of his career. “He’s a big man, and I’ve always said, if you get caught right in the heavyweight division.”

Ever the soldier, Gorman picked himself and did his best to turn things around. Hailing from a boxing family whose famous relatives include his great uncle, the late bareknuckle fighting legend Bartley Gorman, as well as first cousins Tyson and Hughie Fury, the previously unbeaten 23-year old dug deep into his fighting roots in his best efforts to respond to Dubois’ power game.

Getting there, however, required an effort to minimize the incoming. Round four was more of a cat-and-mouse affair, Gorman wisely sliding backwards whenever Dubois threatened to go on the hunt. It was enough to slow down Dubois’ attack and also effective enough to set traps along the ropes, catching the 21-year old with a pair of uppercuts in what was easily his best sequence of the fight.

It only provided a false sense of security, however, as Dubois regained control in round five and never looked back - not that he would have to peer very far.

A right hand shot early in the frame had Gorman in trouble and also in retreat mode.

“I felt him faded. I could feel his body language,” Dubois insisted afterward.

The lack of firepower from Gorman proved a disastrous recipe against a knockout artist like Dubois, who closed the show in a big way. An overhand right caught Gorman clean on the side of the head, sending him to the canvas for the second time of the night.

“I’m a strong man, it worked tonight and he felt my power,” noted Dubois.

This time it was enough to end the fight. Gorman (16-1, 11KOs) believed he was up in time to beat the count, but not according to referee Victor Loughlin who waved off the contest at 2:41 of round five.

“I got back up, brushed myself off and I will be back,” promised Gorman following the first loss of his pro career. This is a good experience and learning curve. I’ll be back in the gym in a couple of weeks.”

Despite the loss, his promoter still envisions big plans for his future.

“What I’d really love to see after this, is Nathan in against Joe Joyce,” promoter Frank Warren commented on air, referencing the unbeaten 2016 Olympic Silver medalist who scored a 12-round decision win over Bryant Jennings in the evening’s chief support. “Nathan is just a tough guy, he never stops coming forward.

“It was a terrific fight between the two youngest boxers to fight for the British heavyweight title. Daniel Dubois really showed tonight that he is the future of the heavyweight division.”

Dubois was extended the distance for the first—and to date, the lone—time in his career in a 10-round decision versus Kevin Johnson, an American journeyman known for stinking out the joint for the sake of going rounds. It was nothing but knockouts prior to that point, and nothing but knockouts ever since.

Three straight stoppages have followed, all coming in a window of just four months in 2019. Dubois opened up the year with a 2nd round knockout of Razvan Cojanu this past March, his performances drawing comparisons to that of top-rated heavyweight contender Luis Ortiz who blasted out the journeyman in the same amount of time last July.

Just seven weeks later came a 4th round stoppage of Richard Lartey to set up the domestic rivalry with Gorman. The buildup was terrific heading into the show, with the night ending on cordial terms between the combatants.

It also ended with high hopes for the future of the winner, although he’s quick to remind the world that he’s still two months away from his 22nd birthday and barely two years into his promising but still very young pro career.

“I just need to keep learning,” insists Dubois. “Every fight is a learning fight for me and I’m learning on the job.”

That’s a scary proposition for heavyweight opponents in his future.

[QUOTE=Tecnoworld;19900905]Yoka is a step down just for his rating. He has better boxing skills compared to Dubois imo. And gorman could outbox Joyce, who's way slower than him (and Dubois).[/QUOTE] Yoka is nothing. Joyce is slow but all this talk…

First time I seen Dubois, I was impressed.

[QUOTE=soul_survivor;19900249]These match ups make no sense. Yoka would be a step down for Dubois and Gorman would just get beat again against Joyce. Dubois v Joyce makes sense but I think Joyce's handlers will keep him away for a while…

[QUOTE=JakeTheBoxer;19900633]Nice win, but no need to hurry now. Kid is 21, he still has a time. Wilder fought bums until he was 30 or something.[/QUOTE] Although I agree his team should take their time with him, however his talent will…

Dubois was impressive, i particularly liked his ram rod jab. He has good fundamentals and it seems like hes not too bad in the chin department. Gorman on the other hand fought scared and threw his punches like he was…