Crolla Explains Why Campbell Does Better With Lomachenko

Earlier this year ar Staples Center in Los Angeles, Anthony Crolla was dominated and wiped out by way of a brutal fourth round knockout at the hands of Vasiliy Lomachenko.

Crolla was practically carried about of the ring, in what was a mandatory contest. 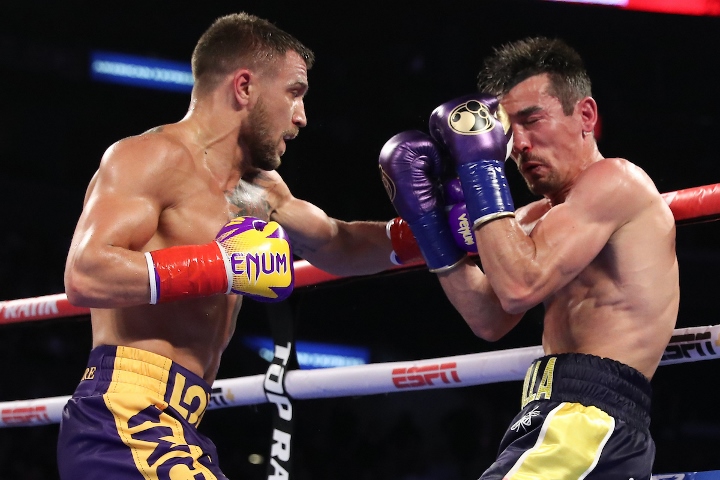 He does not expect Campbell to suffer the same fate.

Crolla feels the style and physical dimensions of Campbell will allow him to make a much better fight.

"Me and Luke are very, very differently stylistically, in fact we couldn't be further apart," Crolla told Sky Sports. "I think Luke is more suited stylistically to give Lomachenko a better fight. Olympic medallist, fantastic amateur. I believe, and this is what I think Shane [McGuigan], who is fantastic trainer, will have him doing, I believe he will be looking to keep it long, use those advantages.

"To me, it just depends on how aggressive Loma comes out. If he comes out so aggressive, he could get to Luke a lot earlier but I think he will look to box and I think for four rounds it will be pretty cagey.

"It will be good to watch from a pure boxer's point of view. I think it will be a real chess match at the highest, highest quality - two Olympic gold medallists, two world class fighters. I think Luke will have little bits of success, he's very good and bowling the back hand up and he'll be a lot bigger than Lomachenko but it's just how long you can keep Lomachenko off and how he closes the distance, super, super clever."

Crolla would love to give Campbell some pointers, but admits that he wasn't able to spot in flaws in his short time in the ring.

"Did I see any weaknesses, honestly no I didn't," added Crolla. "I didn't land enough. I remember landing one decent shot and it was the worst thing I could have done because he went through the gears a little bit then.

"I've been in boxing in 20 years and I've been in with some class fighters both in the ring on fight night and in sparring. Even in the second [Jorge] Linares fight where I got beat well, I got beat really convincing, I still felt comfortable going forward, trying to get my shots off even though a lot was coming back my way.

"Sometimes you've just got to be brutally honest and he was just levels above. He was that good the way he varies up the power of his shots, the speed of his shots, his positioning, always very well balanced. A very, very complete fighter."

Luke Campbell is a decent fighter. He is. Problem is, he's not an upper level fighter. He reminds me of Chris Algieri in how he approaches fights. If a guy is right in front of him he looks for openings…

[QUOTE=Roberto Vasquez;19878485]I said it before the Crolla/Loma fight - Only way for Campbell to win is to do something weird or unusual that Loma has never seen before.[/QUOTE] The best he can do to look better is to lay down…

[QUOTE=Mexican_Puppet;19877070]Highest quality? Campbell is a B class fighter, being generous. Linares schooled Campbell easily. This is another Cherry pick and mismatch to Loma. Another easy win. Gold medal? That means sh.it in the pros. Joshua won a gold medal and…

[QUOTE=observer;19877507]Somehow I don't think boxing long is the way to beat Loma... a volume puncher with an iron chin and a pressure style a la Margarito would've done better. Somebody relentless enough not to be discouraged by Loma's angles, willing…

Somehow I don't think boxing long is the way to beat Loma... a volume puncher with an iron chin and a pressure style a la Margarito would've done better. Somebody relentless enough not to be discouraged by Loma's angles, willing…