After sharing 24 rounds with Jorge Linares, Anthony Crolla knows the silky Venezuelan more than most.

With Linares' May 12th match-up with Vasyl Lomachenko just a few days away, Crolla spoke to the BoxNation Podcast about the potential fight of the year. 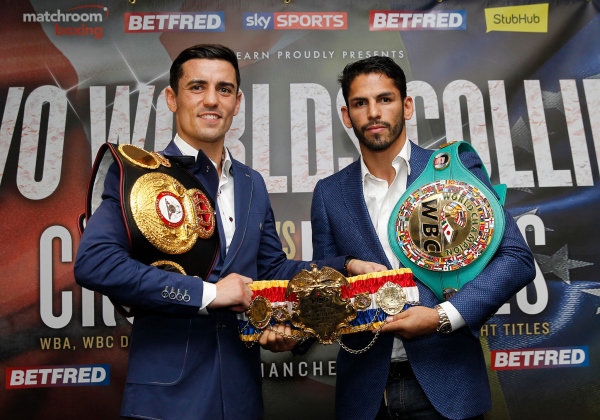 "This is the fight I'm looking forward to most of 2018. I think we've got two of the purest boxers on the planet, two of the most technically gifted pitting their wits against each other.

"It's interesting with Lomachenko moving up in weight as well. For the first time he's fighting someone naturally bigger than him. As amazing as a fighter Rigondeaux was, he was much smaller than Lomachenko. I believe this time there's going to be a few questions asked from Jorge Linares and it's a fight I cannot wait for," said the Mancunian.

Linares has not been trained by long-term coach Ismael Salas for this bout, since the Cuban chose to base himself in London with David Haye, and Crolla believes this could have an impact on the result.

"Yes that is my one worry. Jorge looks like he's had a fantastic camp, but I just believe that Salas and Jorge work together so well. He gets the best out of him. I hope on Saturday night that doesn't effect him too much. When you look at the career of Jorge Linares, he's never lost with Ismael Salas in his corner," he explained.

"Linares is a lot bigger than Rigondeaux, so I wan't to see how he [Lomachenko] handles that. There's no denying that Lomachenko is a special, special fighter but you have to question he's moving through the weights, he's moving fast. Sooner or later it has to come to an end...is it on Saturday? I'm not sure."

When pressed for his prediction, Linares revealed: "The head tells me that Lomachenko is a very special fighter. I really believe Linares can ask some questions. He looks in great shape, I just see a points decision.

"I'm hoping Linares gets the decision. I'm going with Linares, he seems in a great place. I'll be cheering for him early hours Sunday morning."

[QUOTE=DuckAdonis;18756422]I dont want to hear no excuses from you after the fight...i wont make any if Loma loses so[/QUOTE] I'm just making a bold prediction!

[QUOTE=Julia Slobberts;18756417]It will be revealed what a sissy Loma is when Linares batters him around a bit and makes him quit on his stool.[/QUOTE] I dont want to hear no excuses from you after the fight...i wont make any if…

It will be revealed what a sissy Loma is when Linares batters him around a bit and makes him quit on his stool.

I think Lomachenko will totally dominate Linares as he did with all the other guys. I foresee a stoppage in the second half of the fight.

Typical statement from a boxer who's own legacy would look better if the guy who beat him goes onto achieve bigger/better things.