Both Crawford, Khan and Top Rank CEO Bob Arum will be present at the press conference.

As BoxingScene.com first reported, Khan accepted a guarantee of $5 million to face Crawford on April 20th, on ESPN Pay-Per-View. 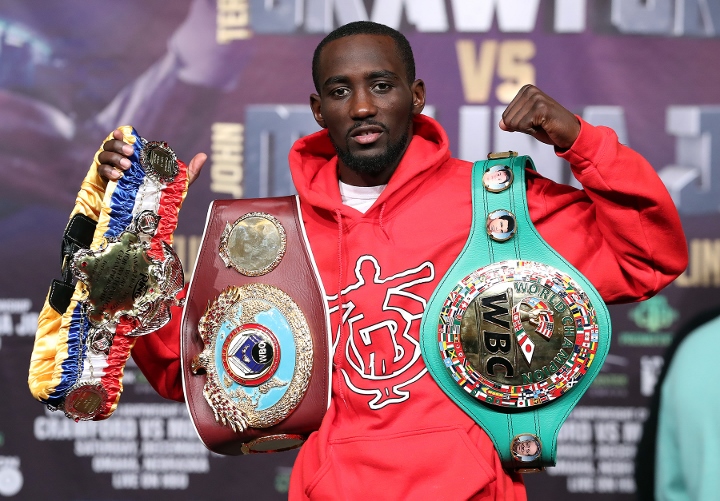 The venue has yet to be decided upon, with New York's Madison Square Garden being the initial frontrunner, but now several of the MGM properties in Las Vegas are under consideration as well.

Khan was offered more money by promoter Eddie Hearn of Matchroom, to face domestic rival Kell Brook. There is one fight remaining on Khan's multi-fight deal with Hearn.

However, Khan felt the contest with Brook would always be there - while the chance to face Crawford, a boxer regarded by many as the best pound-for-pound fighter in the sport, for a world title, is a much bigger opportunity.

Regarding Brook, there were issues with both boxers agreeing on the weight stipulations. Khan wanted the welterweight limit of 147-pounds, with a rehydration clause for following day. Brook was willing to agree to the weight, but had issues with a rehydration clause - which likely would have carried a very hefty fine if Brook was over the contracted limit.

Brook had warned, that if Khan passed him over yet again - he would continue his campaign at 154-pounds and not agree to face him in the future.

For Crawford, the Bolton boxer will be his biggest name opponent and his most experienced opponent. Khan holds the advantage in physical size and speed. Crawford has issues dealing with a faster fighter in the early rounds of his bout with Yuriorkis Gamboa at 135, but eventually Crawford made adjustments and his physical advantages were too much for the smaller man to overcome.

[QUOTE=Nomadic;19427047]True, but Horn is not that far above Khan in ring IQ. What do you think?[/QUOTE] Not really in Ring I.Q. but he has the power to stop Khan and the chin to withstand anything Khan has for him. What's…

[QUOTE=Introspective;19426303]Intrigues me purely because khan was outboxing canelo before getting caught but Crawford's gonna surely work Khan out similarly? With a less devastating ko but same ending... Khan looking like an epileptic breakdancer.[/QUOTE] Was he really outboxing him or was…

[QUOTE=Motorcity Cobra;19426189]It wasn't just his speed. It was his ring IQ, which Khan lacks. Speed can be timed. Khan has never shown smart use of his speed. It's all the same speed, no variance.[/QUOTE] True, but Horn is not that…

Intrigues me purely because khan was outboxing canelo before getting caught but Crawford's gonna surely work Khan out similarly? With a less devastating ko but same ending... Khan looking like an epileptic breakdancer.

It matters little who is in his corner really. Freddie might have him in there for a little less time than Hunter but all the same this will end in even more embarrassment for Khan.This is a total mismatch and…