Crawford Breaks Down, Drops, Knocks Out Benavidez in Twelfth

Once Crawford warmed up, though, the unbeaten WBO champion comfortably controlled Jose Benavidez Jr., battered Benavidez’s body, picked apart his bigger, younger challenger and finished him in the 12th and final round. Crawford’s crushing right uppercut finally floored the previously unbeaten Benavidez with just under 50 seconds to go in their fight.

A stunned Benavidez got up, but Crawford made sure to finish the job against an opponent that infuriated him by constantly talking trash and shoving him at their weigh-in Friday afternoon. Crawford attacked Benavidez once the action resumed and landed a right hook that knocked Benavidez into the ropes.

Referee Celestino Ruiz then stepped in to stop the bout at 2:42 of the 12th round.

Crawford’s victory was expected because the three-division champion was listed as at least a 25-1 favorite by most Internet and Las Vegas sports books. But that didn’t prohibit the loud, proud, pro-Crawford hometown crowd of 13,323 at CHI Health Center from chanting his name and cheerly wildly once he silenced Benavidez.

“I did what I said I was gonna do,” Crawford said. “That’s all that needs to be said.”

The 31-year-old Crawford (34-0, 25 KOs) made the first defense of the WBO welterweight title he won when he stopped Australia’s Jeff Horn (18-1-1, 12 KOs) in the ninth round June 9 at MGM Grand Garden Arena in Las Vegas. The taller, confident Benavidez (27-1, 18 KOs) had some success early, but once Crawford figured him out Benavidez couldn’t make the necessary adjustments to get back into the fight and was entirely too inactive to keep it competitive.

Crawford was way ahead on all three scorecards when their fight was stopped. 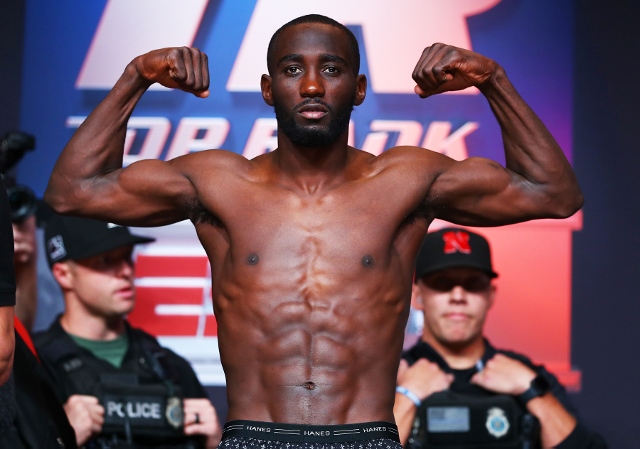 Knowing he needed a knockout, Benavidez pressed Crawford at the start of the 12th round and landed a right hand. Crawford moved out of Benavidez’s corner, though, and belted Benavidez with a straight left.

Later in the 12th, Crawford uncorked the right uppercut that dropped Benavidez and led to the knockout.

“It was coming,” Crawford said. “It was just a matter of time. He slowed down tremendously. He was tired. That’s when I seen my opportunity to take my uppercut shot. Every time I’ll feint, he would pull back. So I was like, ‘Now is not the time.’ But once he slowed down, I seen that I can catch him with it and then that’s what I did.”

Benavidez backed against the ropes early in the 10th round, yet couldn’t lure Crawford to engage and afford him the opportunity to counter Crawford. Later in the 10th, Crawford battered Benavidez as Benavidez again backed into the ropes.

Benavidez didn’t throw many punches in the ninth round and allowed Crawford to pot-shot him to his head and body.

Crawford’s combination punching kept Benavidez from doing much in the eighth round. The challenger mostly took Crawford’s punches, backed up and shook his head during those three minutes.

Crawford continued to batter Benavidez’s body with right hands early in the seventh round. Crawford’s combination to the head stopped Benavidez in the final minute of the seventh.

Just before the bell sounded to end the seventh, they traded hard shots – Benavidez a right and Crawford a left.

Around the halfway mark of the sixth round, Benavidez hit Crawford with a straight right hand to the head and followed with a borderline right to the body. Crawford backed up Benavidez with a straight left later in the sixth and attacked Benavidez’s body toward the end of that round.

Crawford connected with a right hook to the top of Benavidez’s head early in the fifth round. Crawford’s left uppercut hit Benavidez flush when they worked inside a few seconds later.

A straight left by Crawford caught Benavidez later in the fifth.

Benavidez drilled Crawford with a straight right hand early in the fourth round. Benavidez landed another right several seconds later, which forced Crawford to move away from him.

Benavidez landed a low right hand late in the fourth, but he wasn’t warned. He also clipped Crawford with a straight right hand after landing that questionable body shot.

Crawford came back to blast Benavidez with a counter right hook just before the midway point of the fourth.

Crawford connected with a thudding right to Benavidez’s body early in the third round. Benavidez stood his ground and didn’t appear hurt by that shot.

Crawford continued pumping his jab during the third and uncorked another hard right to Benavidez’s body.

Crawford flicked his jab at Benavidez for the first half of the second round, before landing a right hand to Benavidez’s body. Benavidez backed up, but shook his head to signify Crawford didn’t hurt him.

Benavidez belted Crawford with a left-right combination just before the second round ended, however. Crawford took those shots well and stuck out his tongue at Benavidez before he headed back to his corner.

Benavidez stalked Crawford as soon as their fight began, but didn’t throw many punches as he moved forward. Benavidez put his hands down and taunted Crawford, who quickly switched his southpaw stance.

Benavidez then caught Crawford with a straight right hand during the second half of the first round. Crawford responded by pumping his jab to keep Benavidez at a distance for most of the remainder of the round.

Benavidez, 26, suffered the first defeat of a career that was threatened two years ago when he suffered serious injuries to his right leg during an unsolved shooting in his native Phoenix. Before boxing Crawford, the former WBA interim super lightweight champion had boxed just twice, and against a low level of opposition, since ending an 18-month layoff caused largely by the shooting.

Benavidez stopped American journeyman Matthew Strode (25-7, 9 KOs) in the eighth round February 3 in Corpus Christi, Texas. In his subsequent bout, Benavidez knocked out essentially untested Venezuelan Frank Rojas (23-1, 22 KOs) in the first round of a scheduled 10-rounder on the Crawford-Horn undercard four months ago at MGM Grand Garden Arena.

Crawford and Benavidez engaged in a heated argument at the weigh-in before Benavidez’s victory over Strode. That altercation helped lead to Benavidez, who’s ranked No. 10 among the WBO’s welterweight contenders, getting a shot at Crawford.

Crawford acknowledged he took particular pleasure in knocking out Benavidez after all that transpired between them.

“It feels so good to shut somebody up that’s been talking for so long,” Crawford said. “Now I’m at ease.”

[QUOTE=Mister Wolf;19200183]More like 5 rounds until the body punching weakened his punch power and output.[/QUOTE] i agree he was gone by then

[QUOTE=buddyr;19201712]I definitely understand what it is cuz I’ve experienced it. A white person telling a black person what racism is and trying to explain that a white man is suffering from racism in amerikkka is a topic I will not…

Terrance beat a one legged game fighter with decent power. I personally think spence is gonna be too strong an terrance didnt look as smooth as he usually does. Spence will definitely land some hard punches every round if benavidez…

[QUOTE=Jax teller;19201123]Lol you can't say "the Earth is flat let's agree to disagree". Face the facts you are wrong and just don't understand what racism is.[/QUOTE] I definitely understand what it is cuz I’ve experienced it. A white person telling…