Crawford: Khan Was Pampered, I Did It From The Ground Up

WBO welterweight champion Terence Crawford believes Amir Khan had a much easier road to becoming a superstar in the sport.

Khan, a 2004 Olympic silver medal winner, was heavily hyped coming out of those games.

When he turned pro, Khan was already tipped to become a superstar and became a major name in the UK. 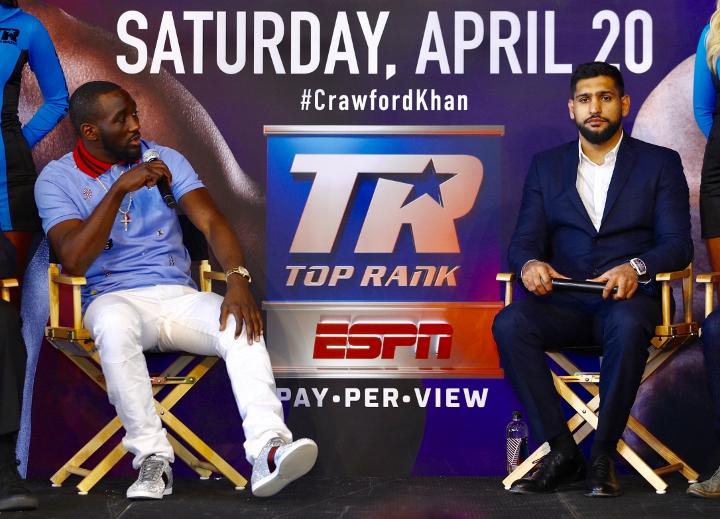 Crawford had zero hype when he turned pro, and he wasn't even handled by a major promoter for the first few years of his career.

He got his big chance in 2013, when Briedis Prescott lost his opponent for an HBO televised fight, and Crawford - who at the time was fighting at 135 - took the junior welterweight fight on very late notice and easily decisioned Prescott over ten rounds.

Following that performance, HBO began to feature Crawford on their network on a regular basis.

Despite being regarded by many as one of the best pound-for-pound fighters in the sport, Crawford doesn't feel the full embrace of the boxing pubic.

“I just want people to respect me for my talent, the skills I have and my willingness to face anybody,” Crawford said to the Evening Standard. “I was putting on pressure for years for a [Manny] Pacquiao fight, but it never happened.

“Amir Khan is a great fighter, I have a lot of respect for him. He got a bigger following turning pro off the Olympics than I had. He got more opportunities than I had.

“I cherish it more because I didn’t have it. He was pampered, he had it when he turned pro. There wasn’t anything to keep him with that hunger and drive you need compared to me, I had to do it from the ground up. I had to fight those type of fights which were high risk, low reward and at the start, I never could get the fights I really wanted.”

Khan, play a blinder and smoke that bud

Bud, don't be petty! You didn't get the Pacquiao fight, and you know who is at fault! Yet and still... September 6, 2018: Welterweight world titlist Terence Crawford, one of boxing's pound-for-pound elite fighters, [B]signed a contract extension with promoter…

Khan earned what he has, that pampering talk is just some bs Bud is throwing in because he really isn't much of a trash talker in front of cameras. But all that matters is that Khan is getting KTFO again.…

TC gonna smash Khan and that's all that matters.